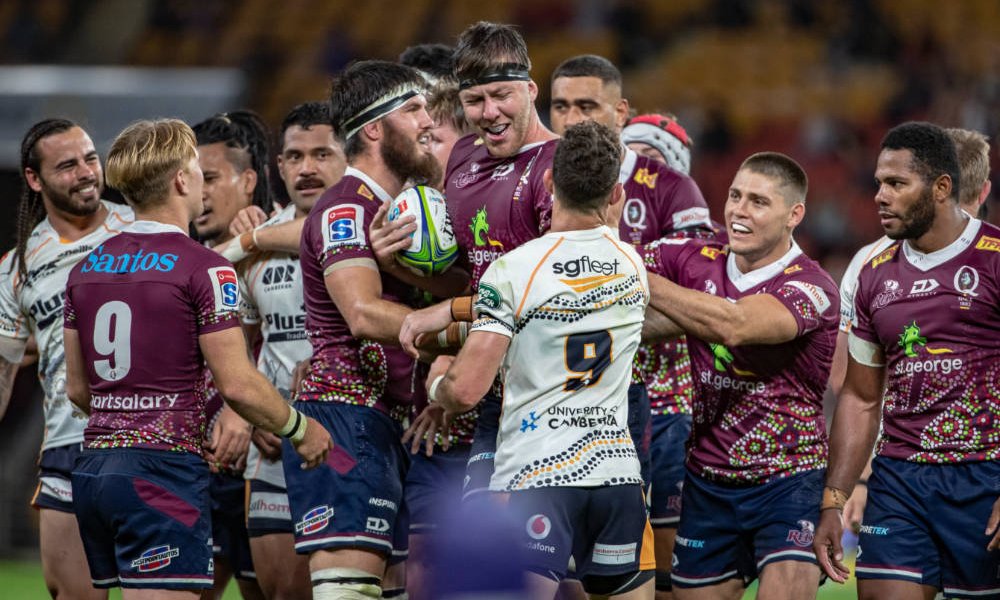 Anyone who’s played in a final, in any sport, will tell you that’s what it’s all about. They will also tell you it’s a rare opportunity, something many people never experience.

They can tell you it’s also the weirdest week of the season and that’s because it doesn’t matter how good you’ve been over the course of the year if you don’t back it up the very moment it counts then no one is going to remember you just for trying hard.

It can be hard to focus and prepare for finals. Teams will not want to focus too much on what the opposition are doing but also won’t want to feel like they ignored them, Coaches have to get that balance just right.

Strategies won’t change too much in the week, there might be a key focus on one or two areas they think can be exploited.

So we’re going to look at Two areas of the game that I think will be key and why.

1: The Reds need to stop the Brumbies Lineout

Ok, so that may sound like the most simplistic answer ever but there is a bit more to it than that.

Key to this is two things, great discipline anywhere from the Brumbies 10m back towards the Reds red Zone and shutting down attempts by the Brumbies to kick deep to the corners.

To show how key the lineout is to the Brumbies consider the following. In 8 games the Brumbies scored 30 tries.

What this tells us is.

First, don’t let the Brumbies into your Red Zone, make them play from deep. That means kicking deep into their corners and applying a great chase (we’ll come back to kicking).

Secondly, Great discipline in the Amber Zone is key (so THEY can’t kick to the corner of easy penalties).

Third, you have to attack their lineout.

This is really important, the Brumbies don’t have the best lineout stats in the competition but those numbers are relative.

Where they are good is in the Red Zone. Because everyone is scared of their maul teams don’t contest the catch enough, opting to stay on the ground and defend the drive. That’s understandable but it’s a bit of a catch 22, if you give a team free ball what do you expect them to do with it?

My preference is to attack the ball as often as possible to make the lineout a contest and if the Reds can disrupt the Brumbies lineout in the Red/Amber zones, it might well stifle the scoreboard for them.

Perhaps getting up and contesting early in the game will make the Brumbies rethink their kick to corners strategy.

Kick and Move (the opposition)

Now the Reds kicking is also going to be a big part of this, the Brumbies are a big powerful side.

If you kick long they have to play from deep but even rotating through carriers and pods (which they are more than capable of doing) it’s still a heavy workload and it’s not something they really want to take on. They want to play in the opposition’s territory.

The Reds need to keep them back in their own half, push them to the edges with their kicks and let them run through their phases deep in their own territory, stand off the ruck, generate line speed and force a mistake, a clearance kick or wait for McReight, Petaia or Stewart to sniff an opportunity to steal the ball.

There are two areas of the Reds defence I think the Brumbies can look to take advantage of and this is how the first is the Reds defence is about making you think you can take them on the edge you can but, how you get there is key.

In the Reds game we saw the Brumbies playing deep behind the line to try and get to the edge. In theory that’s a good thing to do, the defence is thinnest there and if you can get outside that high defender then you’re going to:

Both of these are great outcomes but the problem is it allows the defence to get that high edge, Reds shooting out here to make Kuridrani cut back and it also allows them to come from out to in to meet the ball which gives  far more dominant tackle without being front on.

More Bounce to (the) Pounce

If you can get a ball transfer to the outside channel then usually you can make yards and get the defence to chase you.

As the Brumbies did here, and that opens up opportunities to stretch back across the pitch or start to use those bounce patterns that both the Rebels and Brumbies have used effectively against the Reds come into play.

Bounce patterns are effective against defences like the Reds for a few reasons: 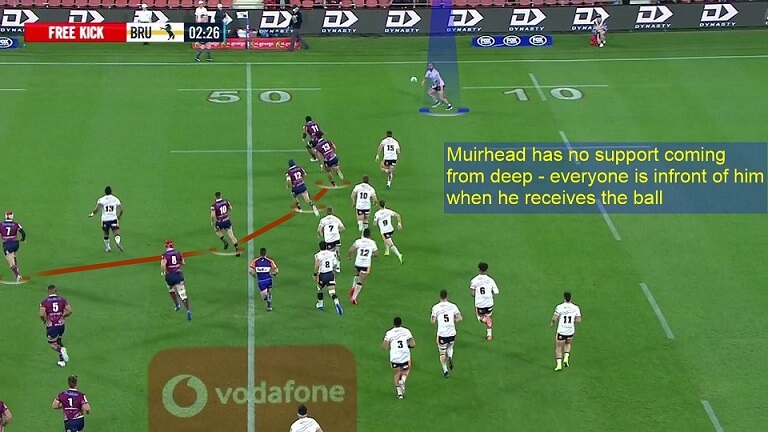 Most defences start to fold under themselves to protect from line breaks, this is much harder to do in a compressed channel with reduced numbers. Here we see the tail end of the same movement from the same game and note how easily the Brumbies manufacture a line break:

Obviously key to this is if you’re going to take them to the edge then how you get outside that defender is key and that’s where the Brumbies haven’t got it right against the Reds.

Ultimately there are two ways to get around the defence. In Aotearoa we saw a lot of teams showing how to beat that high edge defender, probably the best at it was the Blues.

And here the Rebels run a similar play with Hodge coming from deep to fix the edge defender and release DHP:

Now if this all looks like simple school boy Rugby then you’d be absolutely correct, it is.

It’s basically creating a 2vs1 on the edge defender. If the Brumbies want to take the ball deep then fine, but they need to do it in a  way that makes the Reds greedy shoot Petaia up on the Edge and exploit that with a second runner from deep.

The Rebels did it with Hodge coming from deep the Blues with Ioane and Barrett.

Is Kuridrani the guy to do that or do they move Simone out one on attack to exploit his passing game? It is an interesting question.

The second place I’d be looking to “attack the Reds defence” in order to generate the opportunity to get outside them is the breakdown or more specifically the edge of the breakdown.

The dreaded pick and go.

Now we’re not talking about 1ft from the Reds line where defences are on high alert but outside the 5m channel defences can tend to be a bit soft on the ruck fringe or in the 1st couple of channels.

Obviously we saw Koroibete score from one and even if they can’t replicate that, playing through the ruck keeps the defence honest. It means the Reds have to resource the ruck defence properly and it eats up yards.

It’s important it’s done accurately and when the opportunity is there. Whites time with the Exeter Chiefs will have given him a good understanding of when it’s on/not on and with any luck that control may filter into the team.

I also don’t think Campbell and JOC have really been sat down on defence, so i’d like to see the Brumbies firing some launch plays into the two of them, get them on the floor, pick and go through the fringes and then go wide.

By hitting into Stewart and JOC you stop them reloading for the wider defence on the next phase. If you can tie McReight in on that same carry or the next then happy days.

The pick and go will then suck in the next defender out, which means the 9 defender has to step in, narrowing the defence.

Essentially the Brumbies need to remember the defence’s job is to stop them all the way across the park not just in the wide channels.

They need to make the Reds do their job.

And that’s pretty much it, there will be lots of different areas both teams will need to stand up in – Set Piece has to be huge, as both teams like to use it as launch points.

To the same degree both teams kicking will be key, loose is going to be an issue, finding grass or dead is perfect.

Tough to see past a good Brumbies, even if they are more solid than exciting but I do believe if the Reds can back up from last week’s brutal match vs Rebels then they are the last team the Brumbies will want to see jogging out to face them.