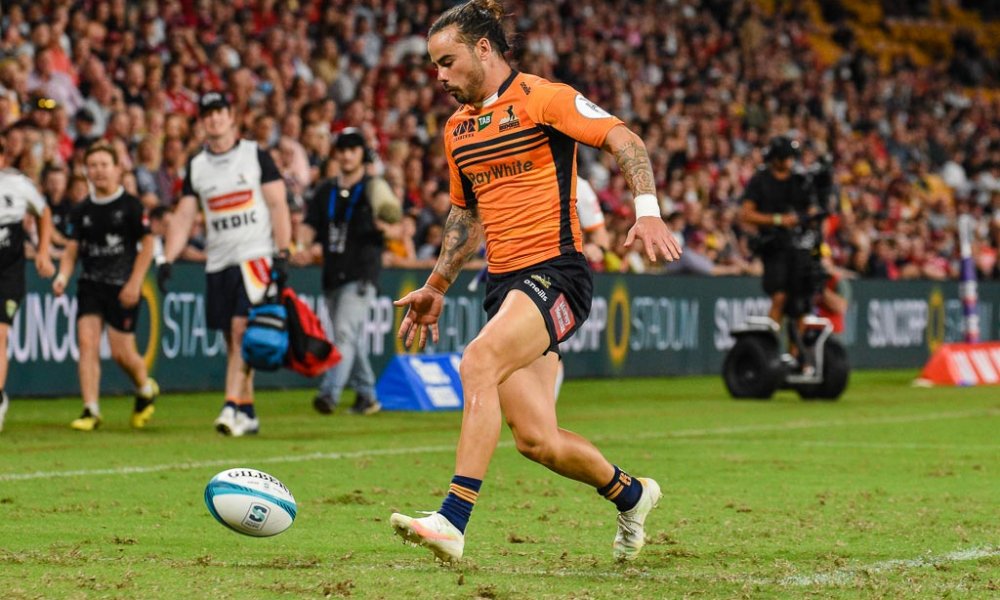 Welcome to Monday, G&GRs! I trust that your tips were accurate and your bellies are full of your choice of beverage and a few pies!

Plenty of rugby to ponder over the weekend, including: Super Rugby, Women’s 6 Nations, and the Singapore leg of the World Series Sevens.

In deference to last week’s marathon read, this edition will be, comparatively, shorter (after reading and editing this… yeah, it’s defs not short…. Soz!!). I’m heading up to the Nation’s Arsehole Canberra to spend Easter at home for the first time in five years (sorry, Mum!) so an early start is required.

Highlanders v Moana Pasifika – A comfortable win for the Highlanders in the end, as they extend a seven point halftime lead out to 20 by the time the full time whistle was blown to earn their first win of season 2022. The driving maul was the key difference between the two sides as the Highlanders went to it on countless opportunities, particularly inside the 22. That, coupled with the incessant penalties conceded by the Pasifika side, meant that they really stood no chance to stick with the home side for the full 80 minutes. Another short turnaround for Moana with a game on Tuesday evening against the Canes fast approaching. Highlanders 37 – Moana Pasifika 17

** Side note – I’m a massive fan of seeing the Super Sides and their Hakas and Na Boles. More please!

Force v Rebels – This was a fucking atrocious game of footy for the most part… yet, somehow, the result and match was a cracker by the end! In the end, Kevin Foote’s men controlled possession and territory towards the end, ultimately securing the much-needed victory. It puts the Rebels tied with the Hurricanes on points and just outside the top eight which shows the bottom of the table is as crowded as the top! The Rebels will be looking to continue their revival against the Reds next week. Meanwhile, Tim Sampson’s men will lament an ill-disciplined performance as they slump to their fourth defeat in five games – definitely not where they were looking at the start of the season. A match against a rested Tahs team looms. Force 21 – Rebels 22

Chiefs v Blues – The Blues have convincingly won the Battle of the Bombays, 25-0, over the Chiefs at FMG Stadium Waikato in Hamilton. The Aucklanders snuck home 24-22 five weeks ago after Bryn Gatland missed a late chance to win it for the Chiefs. This match was a totally different story. The Chiefs seldom took their chances while the Blues, frequently playing a man down courtesy of three pieces of well-deserved cheese, took all theirs! I recall a statistic of approximately 20% possession in the first half for the Chiefs. Three tries ruled out for infringements certainly didn’t help their mood either. The Chiefs have a chance to rebound against Moana Pasifika next weekend while the Blues face the Crusaders in what ought to be a compelling battle. Chiefs 0 – Blues 25

Hurricanes v Crusaders – Well, what a match this was to watch. Brutal up front with some excellent skills from the princesses. Absolutely a game for the Australian sides to watch and ponder what is coming their way in two short weeks with the Super Round.

Apart from a three minute scrum quagmire after 20 minutes, this was a fast flowing match. Strangely after five tries in the first spell there was no scoring in the last 35 minutes of the encounter, but it didn’t diminish the compelling battle that unfolded. The Crusaders were under the cosh in the last minutes but hung on to the win 24-21.

Ardie Savea had a whinge complaint after the match. In fairness to Brendon Pickerill, Ardie won the ball! In such a fast-paced sport and moment, I actually don’t have a problem with his decision. I can absolutely see why he allowed play to continue, too! In honesty, the Canes took the risk to win and came up short. They’d have been geniuses if their choice had come off; however, picking the Crusaders to try and win was probably a dumb move. Canes 21 – Crusaders 24

Drua v Brumbies – The Ponies played a relatively clinical match against a ‘vastly improving yet not quite there yet’ Drua side. The Brumbies repeatedly knocked back shots at goal after penalties, opting to utilise their powerful rolling maul, and that helped Cam Clark scored out wide courtesy of a delightful cut-out pass from Andy Muirhead for 12-0 on 20 minutes. That advantage could easily have been extended in the shadows of halftime, but the Drua defence stuck strong to stop a 12-phase Brumbies drive on their goalline from netting any points.  Hooker Billy Pollard impressed throughout in his first Brumbies start and found a try from yet another maul for 19-0, but the Drua were on the board soon after from impressive link play capped off by Onisi Ratave. The Brumbies structure was again on show on when Connal McInerney also scored from a rolling maul to extend the lead to 26-7.  Onisi Ratave kept the Drua in it by scoring in the corner 15 minutes from time, but they couldn’t find another to put their opponents under any serious pressure. The Brumbies secured a bonus point late with a beautiful step and pass from Hudson Creighton putting Wright through for his second try. Muirhead starred for the Brumbies with 86 run metres and two clean breaks to go with his classy try assist. Drua 12 – Brumbies 33

Fijiana v Brumbies – Fijiana Drua have unveiled another weapon in their armoury as they completed a clean sweep of their regular season Super W matches with a 17-7 win over the Brumbies in Brisbane. Renowned for free-flowing, ball-in-hand rugby, the first two of Fijianas three tries at Suncorp Stadium on Saturday were the result of well-executed forward drives and the third came after a lineout. Full credit here to the Fillies who turned up with some brutal defence to hold the Fijiana out. The fifth win from as many games confirmed first spot for the Fijian team, who advanced directly to the grand final on April 24. Fijiana 17 – Ponies 7

Waratahs v Reds – The NSW Waratahs have rebounded from their first Super W Loss with a smashing of old rivals Queensland. Hooker Natalie Delamere and winger Margot Vella crossed twice as the Tahs ran in eight tries at Eric Tweedale Stadium in Sydney. The win ensured the second-placed Tahs can’t fall below that spot while Queensland will finish third. The bonus-point victory lifted the second-placed Waratahs level with ladder-leading Fijiana Drua, who ended their unbeaten record last week. Waratahs 46 – Reds 0

Force v Rebels – Postponed until this coming weekend due to Covid.

England have now clocked up 189 points in three games in this Women’s 6 Nations which is breath-taking. The English have now scored over 30 tries for the Red Roses who continue their dominance in Europe. It will be interesting to see how they go against France, the other team who have been impressive so far in the 2022 event. France will now know they have to defeat Scotland with a bonus point win tomorrow in order to keep up with their rivals. If they drop any points at all it could prove the difference come the end of the tournament. England’s victory over Wales mean they maintain their spot at the top of the table with a perfect 15 points. England 58 – Wales 5

Thoughts are with Abby Dow of England who suffered a horrific leg injury which stopped the match for over 15 minutes. Recover well!

Follow alone here to view the match results of the Australian Men’s Sevens side in Singapore.

The Australian Men’s Sevens have claimed bronze at the Singapore Sevens, defeating Ireland 21-19 during a nail-biting final on Sunday evening.

Travelling with a new look side, the Aussies boasted an unbeaten run, defeating Samoa, Spain, England, and Argentina until the cup semi-final where they went down to reigning Olympic Champions Fiji, seeing them play in the bronze final.

The Australian Men’s Sevens will now turn their attention to Vancouver, where they will kick off their sixth leg of the World Series next weekend.

Here are some amazing moments from the Sevens this weekend. My ACLs are rupturing from watching the first… and just when you think you’ve seen it all, check out the second video *mind explodes*. Then there’s Perry Baker turning on the afterburners to scorch the Blitzbokke. Finally, there’s a Gaelic goal instead of a conversion to cost a team a chance of a win. Golly goodness me.

Finally, to finish off the Monday news.

As you all know, I love a bit of banter and camaraderie between players and officials. Although the tongue might not be as firmly in cheek as I’d probably hope it to be, Wayne Barnes did leave himself wide open with his tweet earlier this weekend. LOL!