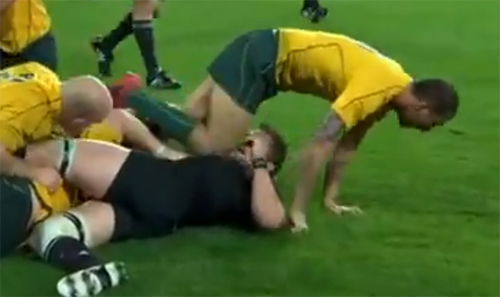 However New Zealand Sports Minister Grant Robertson said the Wallabies had been granted entry under a clause allowing exemptions for events that have a “sugnuficant economuc umpect” according to Rugby.com.au.

“This is important economically,” Robertson said, putting a $NZ$17-20 million ($3.50AUD) value on All Blacks Tests.

The Wallabies have been operating in their own bubble for some time (the Cheika years?), and will travel from their base in Queensland on a charter flight to Auckland on Friday morning, Robertson said.

The Wallabies will not be able to fly in any replacements due to border restrictions, so a large 42-man squad has been selected for a “three weeks in New Zealand” possibility.

The exemption means the first Bledisloe Test will take place at Eden Park on 7 August as scheduled. However, negotiations are continuing between rugby authorities in New Zealand and Australia over the remaining two matches which are set to be played in Perth and Wellington.

Dave Rennie has indicated that rather than criss-cross the Tasman, the Wellington Test may be played second and both teams will then travel to Perth.

The result has ended Australia’s medal hopes at the same stage as Rio in 2016 as reported by Jim Tucker.

The Aussies were closer than the score indicated and might have gone into half-time at 7-all if a fine Maurice Longbottom run had earned the try it deserved.

He might almost have torpedoed low and scored himself, but passed to the accomplished Lachie Anderson, who had the ball jolted from his grasp as he attempted to score in the corner.

Play did not run Samu Kerevi’s way in the final for him to have an impact in his short stint.

“They’re absolutely shattered as am I. You can’t deny them of the hurt. They put their blood and sweat and tears into it over a long period of time,” Australian coach Tim Walsh said of his players. Fiji will play Argentina in a semi-final.

Rassie agrees with self on Twitter to stir Lions

South Africa’s director of rugby, Rassie Erasmus, has been urged to make his complaints through the “proper channels” by the British & Irish Lions after he again lashed out on social media, accusing Mako Vunipola of “reckless and dangerous” behaviour towards Cheslin Kolbe according to The Guardian.

“Cheslin is obviously played in the air and clearly not direct into touch!!” tweeted Erasmus, who used a similar method to question the legality of Owen Farrell’s tackling earlier in the series. “More importantly for youngsters watching this clip!!!! Please never move or touch an injured player on the ground, its reckless and dangerous!”.

On Sunday Erasmus retweeted a video posted by the user “Jaco Johan” which highlights calls that went in the Lions’ favour during the first Test. “Jaco Johan’s” social media history has aroused suspicion. The account had only once tweeted before despite being set up in 2016. It has also liked a tweet by Munster – when Erasmus and the current South Africa head coach, Jacques Nienaber, were working for the Irish province.

Furthermore, “Jaco Johan” uses the same type of graphics – a yellow circle – to highlight the alleged foul play as Erasmus does on his official account.

Erasmus has already provoked the Lions by acting as a water carrier, thereby enabling him to enter the field of play and pass messages directly to South Africa players. World Rugby regulations only dictate that head coaches cannot be pitchside.

Warren Gatland wryly pointed out after the South Africa A game that Rassie could at least have taken out some water with him.

Despite the allocation of an unconditional licence to Moana Pasifika on Monday the future of Super Rugby is still unresolved, with divisions still apparent on everything from competition structure to revenue sharing according to Paul Cully writing for Stuff.co.nz.

In the last collective Sanzaar broadcast deal in 2016-2020, the overarching agreement was that NZ Rugby, Rugby Australia and South Africa shared the pooled broadcast revenue. Covid-19 hit, forced NZ Rugby and RA to stage their own competitions and the pooled revenue agreement went out the window.

Since the 2016-2020 deal NZ Rugby signed an improved & lucrative deal with Sky, while RA signed on with a new broadcaster (Nine/Stan) that is giving it greater coverage but isn’t paying on the Sky/NZ scale. Australia is confident that its next broadcast deal, which can be renegotiated in two years’ time, will come with a decent uplift that will ultimately benefit both Australia and NZ.

The addition of Moana Pasifika and the Fijian Drua – and who pays from them – have added another layer of complexity.

NZ Rugby wants to spend money on community rugby and women’s rugby, and has also driven the inclusion of Moana Pasifika and the Fijian Drua. It also craves a Super Rugby competition with integrity, fearful of a conference-style system that gives Australian teams a path to the finals. And it doesn’t want to subsidise Australia’s uncompetitive Super Rugby teams.

Rugby Australia wants a return to the pooled revenue model (taking 50%) to give itself the best chance of rebuilding its game with a 2025 Lions tour and possibly the 2027 Rugby World Cup on the horizon. It wants equal partnership status and recognition of its value to NZ Rugby.

Australians are pushing for a conference format, while New Zealand see more merit in returning to an all-in competition.