The Reds took this opportunity to sweep away the Blues from last week’s draw, and in the process made a clean sweep of the New Zealand teams for the year, a first for Australian Super Rugby.

The first ten minutes saw the Blues with a mountain of possession but the were unable to do much with it as first points were scored by the Reds, with James Horwill proving he can go the sticks (after last weeks criticism) and Quade Cooper slotting it. the blues quickly earned a penalty from the kick off and scores were leveled.

The teams continued to trade penalties, the best of those being Albert Nikoro, making his starting debut, kicking an absolute monster from wide out on the halfway line.

The Blues broke the trend though when they had camped on the Reds try line. The Reds defense held them out until Jono Lance was caught out of position by Jackson Willison who got the ball down for the first 5 pointer of the match. Chris Noakes was unable to convert the try. 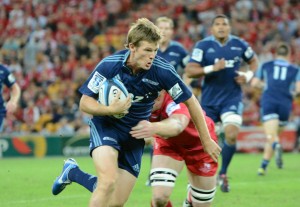 The Blues did plenty of running, here’s a photo of some.

Things began loosening up in the game as the half time hooter drew near, though despite the frenetic pace, neither team could cross the line and the teams went to the sheds with the Blues leading 11 points to 9.

The Second half started off the same as the first, with the Blues commanding a mountain of possession. The similarities continued until the first points were missed by the Reds, Quade missing a relatively easy goal.

the next twenty minutes went in a blur, such was the pace of this game. With no points yet scored in this half, it was becoming a question of who would break through and make this game their own. It fell to another Quade Cooper kick and this time he did it. With 5 minutes to go the Reds led by 1, 12-11.

The Blues spent the last 5 minutes working hard on the line, but they kept giving away penalties and let the Reds do enough to take the game. The fact they did was quite remarkable, if for no other reason than they only had roughly 40% possession and managed to miss 27 tackles. This will be a good one for them to draw on should they make the finals.

In the sixty fourth minute Will Genia diffused a kick through (it was offside anyway) and Quade kicked long when they were expecting a run, they returned the kick but it was a Reds line-out instead, with plenty of territory gained as well.

Quade Cooper was on fire tonight, everything he did was assured and considered. Though the Reds were tryless he certainly put on a display to make the Wallaby selectors take notice.

Quade Cooper responded beautifully to Robbie Deans’ “account-abilities” barb on rugby HQ during the week, getting through a mountain of work, including a huge hit on Rene Ranger amongst his many defensive involvements.