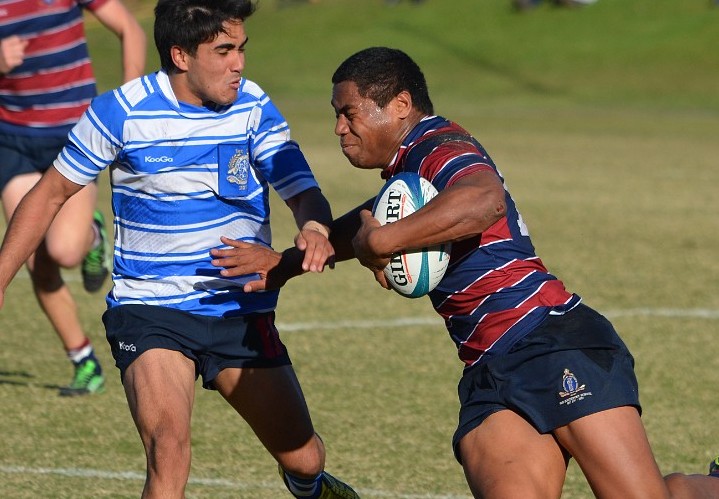 Two of Australia’s preeminent Rugby nurseries and perennial GPS favourites met at Southport to determine the fate of the 2013 GPS competition, leaving the home side favourites stunned and the keys to the kingdom open to be challenged.

For other match reports for Round 4, please click here. 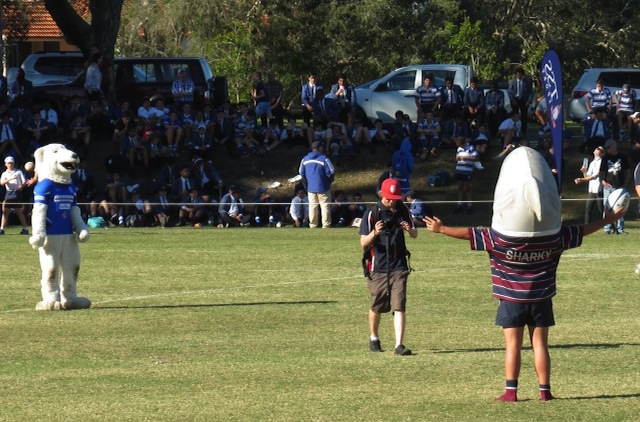 Nudgee’s 2013 campaign started with nervous spluttering, but truly had the engine roaring just in time to hold out a devastating Southport comeback late in the game to win 30-26 over their competition rivals.

From opening kick-off Nudgee made it clear they had brought their ‘A game’ to the coast as the fiery (by hair and by nature) speedster Campbell Magnay (outside center) took the ball 60 metres downfield in the first phase of the contest. The opening minutes saw the momentum see-saw between the two juggernauts as each team battled tooth and nail for the upper hand in the match.

Poor discipline from Magnay in the 4th minute nearly cost Nudgee the first points of the match as he failed to release TSS fullback Ed Gibson in the tackle 40 metres out, and dead in front of his sides’ goalposts. An uncharacteristic miss from superstar flyhalf Mitchell Third let Nudgee off the hook, but the pressure was mounting on the boys in the butcher stripes.

The afternoon rang out with the clash of big men from both teams as each forward pack aimed to blow the other off the park through sheer force of will. Nudgee’s physicality in the defensive line and breakdown was championed by Australian Schoolboy representative Alex Mafi at hooker, and assisted in no small part by prop Matt Gibbon and back-rower Maclean Jones. Conversely, TSS were no slouches in the tackle zone either, with PJ Vandenburg (number 8), Nili Fielea (inside center) and Evander Guttenbeil (loosehead prop) making themselves felt by the Nudgee ball-runners across the park. 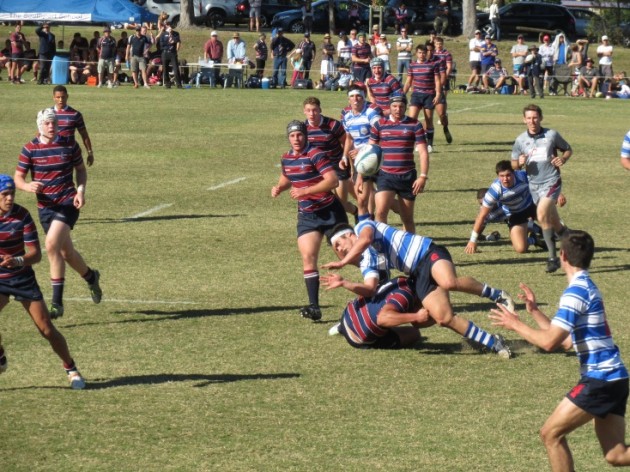 One such big tackle from Vandenburg forced a turnover that sparked a 40 metre set piece move that saw fullback Gibson streak through the Nudgee outside backs at pace. The speed of the raid left the Nudgee line in shambles, and drew an offside penalty the very next phase. TSS kicked for the line in the ninth minute, making a statement to all that the team had every confidence that points would not be in short supply during the game.

The first real opportunity to score a try did not come, however, until the 14th minute when a James Tuttle chip chase found its way into the hands of TSS’ Genia like halfback Issak Fines. Fines utilised his speed and skill to transfer the ball to the right wing, where Isaac Nathan took off down the sideline. Nathan beat 3 would-be tacklers with some fantastic footwork before loosing a perfectly timed pass in contact to inside supporter Nili Fielea (inside center). Fielea couldn’t escape defender Calvin Pritchard, however, and looked to offload to flanker Luke Papworth who lost the ball over the line.

The entertainment continued 3 minutes later when the defending boot of Alex Mafi knocked the ball out of the ruck, upon which Fines scooped it up, saw the opportunity for a dash and darted down the sideline with Third in support. With Fines tippy-toeing down the sideline, the Nudgee defence was caught flat-footed as the nippy halfback stepped to the inside, drawing fullback Aitsi before unleashing a no look flick pass to Third who had snuck around to his outside. Nudgee halfback Pilz tore off in pursuit of Third only to be hurdled in his last ditch effort at stopping the runaway half. Third touched down in the corner, but was unable to convert his own try.

Fines’ starry involvements did not stop there, as a minute later he was seemingly trapped in the tackle of Nudgee’s Maclean Jones (8) before throwing a round the back flick pass to a supporting player. Southport had definitely established their mojo in the match.

However it was Nudgee that opened their scoring account next, as a series of pick and drives resulted in tighthead prop Matt Gibbon barging over for Nudgee’s first try of the day in the 24th minute.

Southport had the opportunity to score next through a Joey Fittock (outside center) line break, but an overcooked chip and chase over the fullback attempt saw the ball bounce once and roll dead. Ensuing possession saw strong carries from Nudgee’s forwards and backs in tandem, and eventually, 15 metres out, a penalty for not rolling away. Tuttle slotted his kick in the 28th minute and then proceeded to desperately defend the remaining minutes as the tearaway TSS fullback Gibson knocked on over the line at the stroke of halftime.

The start of the second half saw Nudgee pull ahead in the contest, as two quick tries in succession saw the score start to balloon. Second Rower Reece Hewat scored a pick and drive try easily as the Southport defence failed to halt the Nudgee forward onslaught to start the second period. Tuttle converted the try to take Nudgee to a 15-5 40 seconds after kickoff. 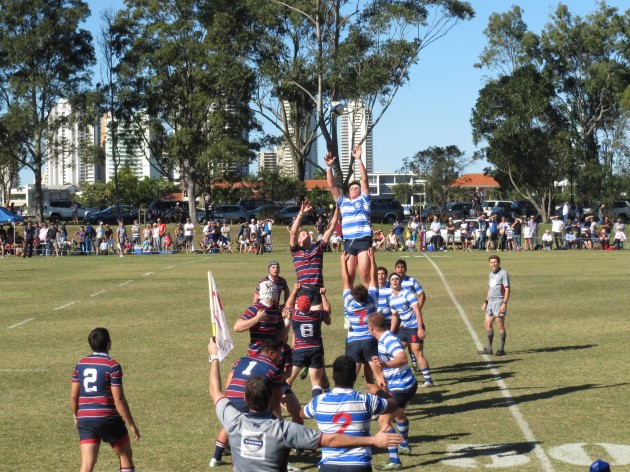 This period saw the Southport defensive alignment start to falter, and left acres of space for the Nudgee outside backs to excel in. Campbell Magnay nearly tore the defence the shreds in a 39th minute linebreak, and if it weren’t for a knock on by supporting winger Tyrone Hussey would have certainly scored under the posts.

Just 2 minutes later Nudgee’s left wing Jamie DeShon scored after spinning out of the hold of 3 defenders to crash down in the corner. Southport had no answers for the destructive running of the Nudgee forwards and backs, allowing themselves to be sucked in time and time again only to be exploited out wide when they committed to the forward threat.

The powerhouse running rugby displayed by Nudgee was putting huge pressure on the Southport players, and it was manifesting in their performance as a team as the game stretched on. Fullback Gibson dropped a box kick that almost went straight down his throat inside the 22, granting Nudgee fantastic field position. Pick and Drive mode was activated by Nudgee, and it got them inside TSS’ 5 m line. A scrum to Nudgee saw center Campbell Magnay crash over from short range, taking Nudgee’s lead to a seemingly insurmountable 30-5.

With 20 minutes to go and a 25 point deficit to overcome, it would take a truly champion team to triumph. It was now that Third and Fielea ignited, carrying the team on their backs. Destructive running by Fielea got Southport in to field position, and Luke Papworth burrowed through the tiring Nudgee line to steal a try for his side in the 50th minute. 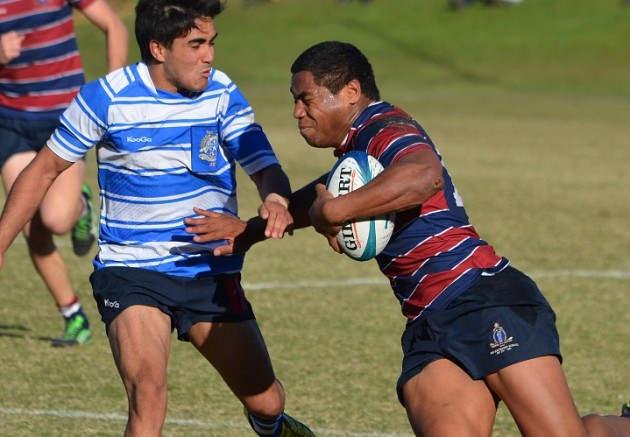 5 minutes later Southport found themselves back on the Nudgee try-line, and Nudgee was starting to show the pressure they were feeling. Calvin Pritchard slapped down the ball out of Fines’ hands on the goal line whilst in an offside position, earning himself a yellow card for professional misconduct. Papworth took the quick tap and shovelled a pass to the right, catching Nudgee napping and allowing Isaac Nathan to cross in the corner for a nice try. Third kicked a clutch conversion, and those in the stands were starting to sit up and take notice.

In the 67th minute hooker Jake Lyon burst through the Nudgee midfield, forcing the defence to scramble from the TSS 22 to Nudgee’s 40 metre line. One man down, this proved too much a task for Nudgee as Southport attacked the left hand wing. TSS center Fittock stepped inside Nudgee’s defensive cornerstone Magnay, hurdled the feeble ankle-tap of Hewatt and passed to his outside man Dorrough.

With 2 left to beat, Dorrough stepped off his left and glided between the tackles to score between the posts. The TSS crowd were witnessing a masterclass in come-from-behind Rugby. With 2 minutes remaining, Nudgee looked dead on their feet with the narrowest of leads, seemingly incapable of holding back the resurgent Southport side. 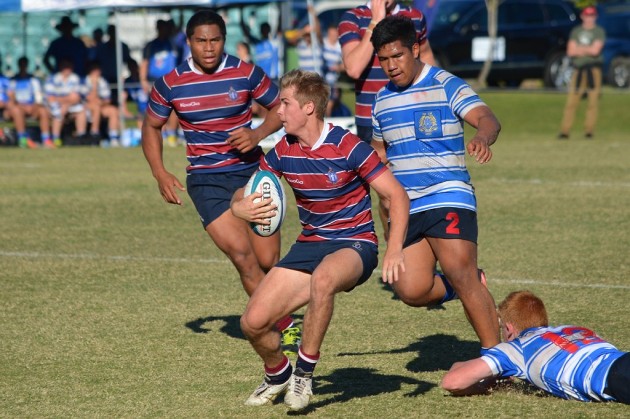 From the kick off, TSS played coast to coast rugby with confidence and picked up metres by the dozen. It was all Nudgee could do to hang on to the Beach Boys as they crashed down the field like an unstoppable tidal wave. The Nudgee physicality went out the window as all thoughts went to preventing a try. A wide cutout from Third saw Nili Fielea hurtle down the left wing, crossing in to the Nudgee half just as the 70 minute alarm blared. Too fast for his own good, Fielea was isolated and strong work from Nudgee saw the ball turned over and booted into the stands with finality.

Both teams immediately collapsed to the ground, completely spent after a tumultuous 70 minutes of hard running and hard hitting Rugby. Southport’s team of superstars proved they were mortal, but only just. Nudgee played a fantastic opening 50 minutes, but couldn’t defend their lead with one man in the bin and the forwards tiring fast. One couldn’t help but feel that if Southport had just another few more minutes up their sleeves the result could have been very different indeed.