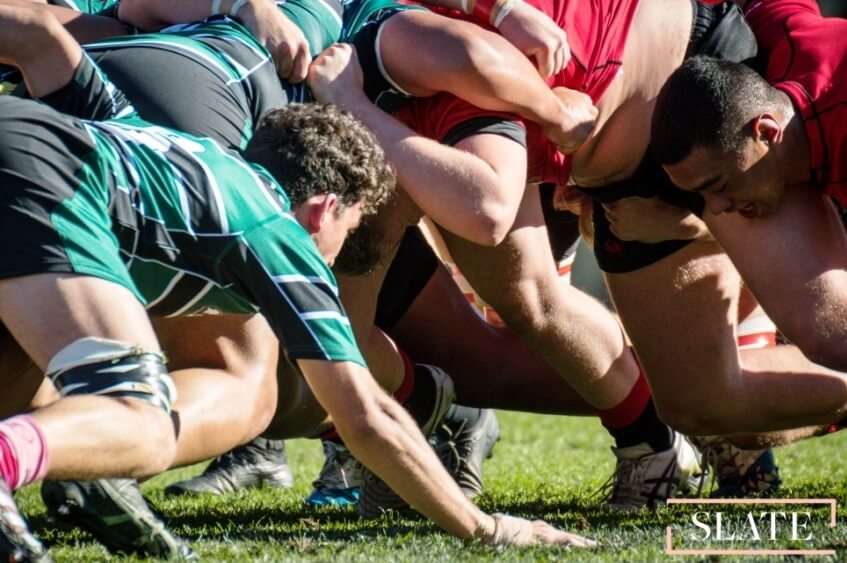 The first match. The opening round. Months of preparation, agonising training, endless planning, would culminate in this contest, desperately fought on Miskin Oval between Brisbane Boys’ College, and Gregory Terrace. Two teams, glistening with talent all across the park took to a field which promised fast, intense rugby. This promise was delivered on in spades.

The palpable tension seconds before the kickoff soon turned into early disappointment for Gregory Terrace, as BBC were able to score mere seconds into the game. Collecting the ball in their own half, recycling, and spreading it wide, the BBC No. 11, Xavier Savage,  was able to run over sixty metres to score in the corner. A bold chase by Gregory Terrace scrumhalf, Will Kirk, was unable to prevent the ball being planted, and a successful kick left the score at 7-0.

It soon became apparent that BBC were willing to spread the ball early, trusting their outside backs in space to reward them with field position, and points. A thumping tackle by Terrace fullback Mone Ma’afu halted BBC momentum, but they were able to retain the ball and slowly mount pressure via sustained territory and possession. Wide attacking raids in the middle of the park were repelled by strong tackles, and the strength of the Terrace defence was reflected by BBC’s decision to opt for a penalty goal from an ensuing ruck penalty. The boot of the BBC’s flyhalf, Carter Gordon, held true, but with the score at 10-0, Terrace supporters could take solace in the willingness of their team to defend relentlessly, and constantly attack the breakdown.

The game devolved into a territory battle played in the middle third of the field, both teams struggling to gain clear ascendancy. BBC clearly believed they had an ascendancy in the scrum, after they consistently opted for a scrum from consecutive penalties. Winning multiple scrum penalties, they sought to press their advantage, and a backline shift was only interrupted by an attempted intercept by Terrace winger, Glenn Vaihu. 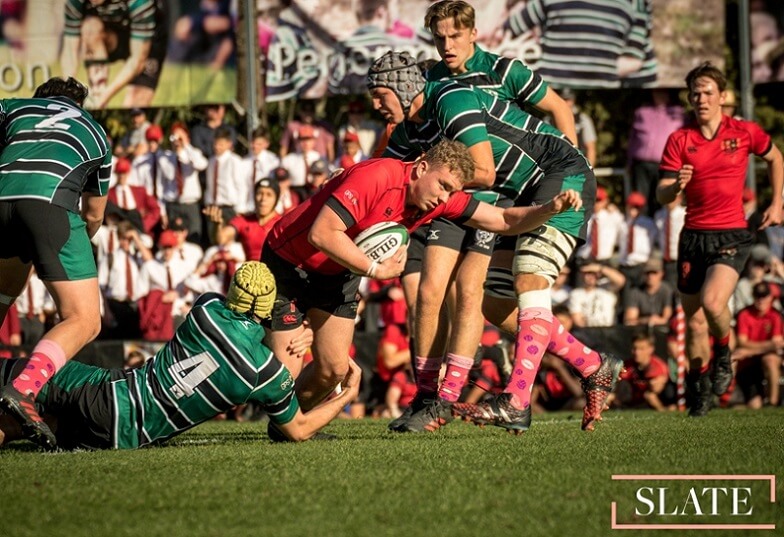 Terrace try to break through the strong BBC defensive line

After securing a defensive scrum penalty, Terrace was finally able to enjoy a consistent run of possession and ventured deep into opposition territory for the first time in the match. With the help of hard running, and a fine defensive breakdown performance, Terrace’s first points were secured from the boot of Will Kirk, for an offside penalty. With the score at 10-3, glimpses of Terrace’s attacking potential was beginning to show.

Unfortunately, soon after this success, BBC’s pet play resulted in another try to an outside back. The ball went through the hands before ending up in the mittens of the BBC No. 14, Shayden Stevens, who was able to find himself on the outside of committed Terrace defenders, and turn on the pace to plant the ball under the posts. A simple kick left Terrace behind 17-3, but the body language of all players, from 1 to 15, indicated this game was far from over.

In the shadows of halftime, Terrace’s commitment to the chase was rewarded with a ruck penalty in front of the posts, with Will Kirk slotting the kick to leave the score 17-6 as the teams returned to the sheds. Despite the scoreboard deficit, Terrace had defended well during long periods without possession or territory, and all at Miskin Oval were left wondering how the game would fare once Terrace were able to secure sustained possession.

Securing possession after halftime, incessant BBC attacking raids were repelled by Terrace defence, leading them to opt for a penalty goal. The goal was subsequently missed, steeling the defensive resolve of Terrace. Multiple ruck penalties, split between the two sides, highlighted a hotly-contested breakdown, with both teams unwilling to relent on their commitment to aggressive play. Unfortunately for Terrace, a BBC move beginning in their own half resulted in a try to BBC’s No. 15, Jack Bowyer. A third try to BBC’s outside backs left the scoreline at 22-6, growing to 24-6 after a completed kick.

For many teams, an 18-point deficit would prove too high a mountain to climb. But Terrace began to read BBC’s wide passes well, consistently shutting down their offence with crunching tackles. This was rewarded with sustained possession. Hardly dwarfed by the size of BBC’s lead, Terrace played as if the scoreboard read 0-0, and were subsequently able to score their first try of the match. Begun by a line break on the outside by MoneMa’afu, successive phases drew Terrace closer to the line. A bullocking run by inside centre Dan Condon saw him muscle over green defenders and plant the ball. Consultation with the touch judge saw the try awarded, and a successful kick saw Terrace well in the hunt at 24-13. 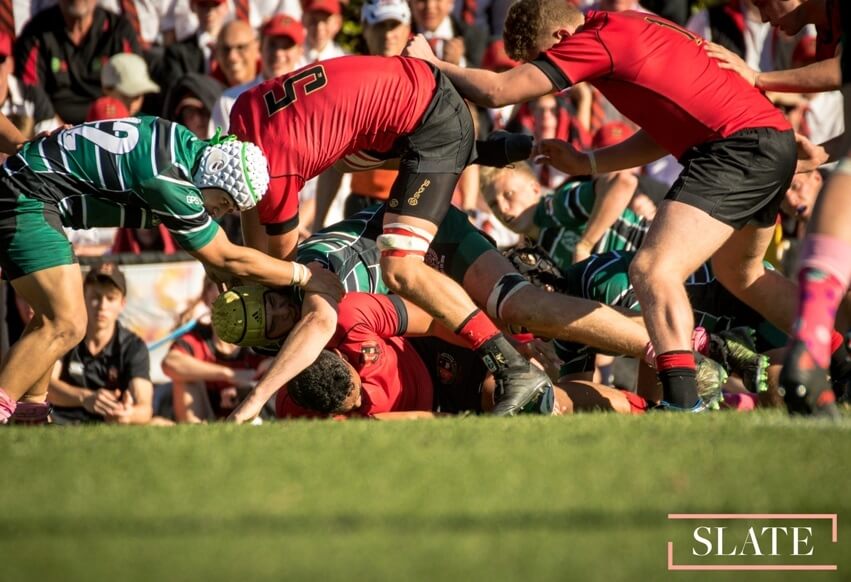 Both teams work hard over the ball to secure possession

Soon after, a sublime attacking move, that began in their own half, saw Terrace draw ever closer to whittling away BBC’s lead. The ball travelled between multiple sets of hands, before being planted victoriously in the corner. A sleek run by MoneMa’afu broke multiple tackles on the right wing, before the ball travelled to Reilly See, who ran hard angles to carve up the defence, spreading the ball to Tyron Metusela-Suapaia, ultimately delivering a well-timed pass to Patrick Elekana, who palmed away multiple green defenders to score. After having been tormented by BBC’s outside backs for much of the game, there was a wonderful triumph in Terrace’s outside backs all contributing to the most impressive try of the match.

24-20. Four points behind. Seven minutes on the clock. All momentum was headed the way of Terrace, and the game looked set for a photo finish. Consecutive penalties saw Terrace in strong field position, before spilt ball gave BBC the chance to kick the ball deep inside enemy territory. A penalty conceded by Terrace on the tryline granted BBC a chance to take the game beyond doubt, and they took advantage of numbers to spread the ball and score on the outside, crushing Terrace hopes of a glorious comeback. A successful kick left the score at 31-20.

A final attacking raid from Terrace, showing enormous commitment, ended with the ball in touch, the match concluding with two exhausted teams knowing they had played a high-spirit, intense game of rugby. Running rugby was well and truly on display, as was strong efforts at the breakdown. But for the pace of BBC’s outside backs, the scoreline may have been radically different. With the grudge match against Nudgee awaiting Terrace in the second round, their unrelenting conviction in constantly fighting for victory should give their supporters, and their players, enormous hope.

Reviews brought to you in conjunction with the Terrace Rugby Supporters Group.