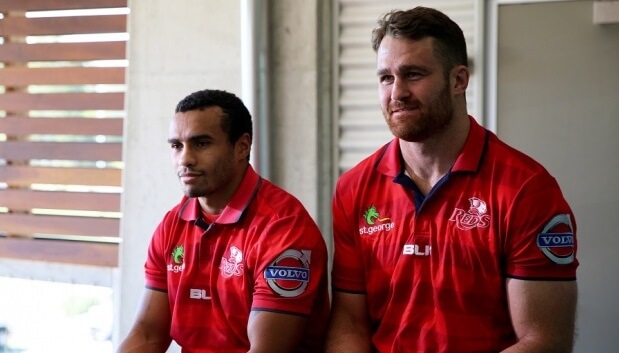 On the face of it this should be one of those games that flies under the radar, or rather the blip is noted and ignored due to a lack of perceived significance. After all the Chiefs are sitting in fifth spot on the ladder, reasonably comfortably in finals position. The Reds, meanwhile, are down the other end of the table having just seemingly avoided any potential wooden spoon concerns.

However not all is as it seems and Super Rugby is renowned for throwing up any number of little variances that can derail any locomotive of expectation. And I can feel the rumblings. Whether its a derailment or  simply the express train flying by, we will find out for sure on Saturday night. But I’ve got a feeling something special is brewing.

Looking at the arbitrarily chosen figure of the last half a dozen games we see that both teams sit at three wins and three losses. If you want to micro-analyse that a little further you will note that the Chiefs have actually lost three of their last four games whilst the Reds have managed to secure two wins in their last three outings.

The Reds v Chiefs match at Suncorp Stadium this Saturday evening will be a part of the annual Reds Indigenous Round.  It falls as part of a week in which the QRU celebrate their own indigenous program which began in 2012, whilst allowing the rugby community to recognise and include the nation’s oldest culture in our rugby celebrations. Importantly, the Reds players are very much behind the cause and the annual indigenous round game has traditionally produced memorable games befitting a cause of such significance.

This year the game holds even more consequence, at least from a dyed in the wool Reds fan’s perspective. For this is the last time Queensland Reds supporters will get to see two of their favourite sons, James Horwill and Will Genia, play in front of a home crowd for their beloved team.

Make no mistake Horwill and Genia will go down as two legends of Queensland Rugby and, as the years pass, their names will sit fondly alongside other Queensland greats such as Loane, Shaw, Slack and McLean. In fact in any all-time Queensland team selection discussion, you would be comfortable picking Big Kev to pack down alongside John Eales in the pack and delight in the prospect of Genia combining with Mark Loane off the back of a scrum and freeing up Michael Lynagh outside of him.

Alongside their partner in sublime, Quade Cooper (who, as it turns out, we may also not see again for the Reds), we were fortunate that these three wonderfully talented rugby players were able to all peak at pretty much the same time to deliver us the 2011 Super Rugby championship. One only needs to watch a replay of that memorable victory over the Crusaders four years ago to appreciate just how significant their contribution to Queensland Rugby was. Whilst Genia will be remembered for his match sealing try and taking on the Crusader defence  in a run that began well in his own half, Horwill was the undoubted Man of the Match in an aggressive and impactful 80 minutes of rugby as we have seen from a lock forward in Australian rugby’s recent history.

For both their form in 2015 has been unable to achieve comparable standards, as both seemingly have lacked the one key ingredient that they both so need to perform at their best. For Horwill, his is a game built on aggression and physical domination. It’s a performance that is derived so much from his unquestioned passion and enthusiasm. Over recent years, from an outsider’s perspective, this passion seems to have faded. The effort and determination is there, without question, and class has seen him produce glimpses of his best. But it was the passion for the jersey, for his team and for the game that drove him week to week, minute to minute. I can understand that being difficult to reproduce season after season however, particularly when change is happening around you and the belief you once had in the entity you are apart of is slowly decreasing.

For Will, he has never looked better than when he had Cooper outside him. This is not to belittle his own abilities as he has proven to be a world class scrumhalf in his own right. But there’s a certain comfort for him when his old mate Quade is running out beside him. Cooper said it himself when commenting on the number of times Genia told him how good it was to have him back, in the lead up to last week’s game against the Force. They are a combination that just clicks as the very best 9-10 partnerships do. Whether it is simply natural instincts between the two, or through Quade’s superior communication skills on-field. One helps the other, and we as fans have been the benefactor in it.

Both Kev and Sanchez are off to take up new challenges at Harlequins and Stade Francais respectively. For the former, the question is whether he can develop the passion for the team that he displayed so apparently for the Reds, the Wallabies and for the Red Heavies – his University of Queensland Rugby Club. For Genia, it will be whether he is able to stand alone and take his own game to another level working with a whole bunch of new faces, and no QC alongside him.

Unquestionably these two players players, both alumni of the Brisbane Boys College, deserve to take their opportunities abroad. More significantly both deserve a send off of memorable proportions. I remember taking my two young sons to a similar match for Ben Tune. It was an afternoon game against the Cheetahs in 2007 and Tune was playing his last game for the Reds at Suncorp Stadium. The crowd was dismal, as they tended to be back then in those dark days, and as Tunie claimed an intercept and ran away for his last try in Queensland colours I was filled with both joy at the moment, but sadness that this was how such a Queensland legend would finish his career with us. I hope against hope this does not happen again this weekend.

I hope that all those Queenslanders who took such joy in celebrating those magic moments of a few years ago can get along to the game on Saturday night and farewell two (perhaps three?) of our Reds legends. It is the very least they deserve given all the blood, sweat and tears they have shed, and all the hours of enjoyment they have provided us since their debuts all those years ago.

The match will also be James Hanson’s last home game for the Reds (for the time being at least?) as he recently announced his departure to join the Melbourne Rebels next year.

The (other) key players

Sam Cane and Liam Gill are two international understudies at the top of their game providing critical breakdown work for their respective provincial outfit. Whilst Cane has been a more regular part of the All Blacks than Gill has for the Wallabies, both play their Super Rugby seemingly in the positional shadow of others. Both players have a very similar approach to the game and, likewise, have comparative statistical outcomes with Cane’s figures around defence particularly outstanding (153 tackles at 97.5% effectiveness). Whilst the outcome of the match will be determined largely by which pack can dominate, the performance of these two flankers will lead the cause for their team.

Departing players Horwill and Genia will both enjoy the challenge of taking on such quality young opposition talent in Brodie Retallick and Augustine Pulu. With Retallick returning from injury and determined to prove his RWC credentials, and Pulu celebrating his 50th match, there is much to play for for these Chiefs players as well.

I don’t care anymore. No more reasoned debate. This one’s purely from the heart. Reds to win by 6.

The Chiefs’s performances have been less impressive of late, and there is not as much for them to play for in this game as the Reds. For the Reds, they simply must lift. Forget ‘saving face’ after a disappointing season, this one is purely about giving James Horwill and Will Genia the home send off they deserve.

And so, once again, I implore all you Reds fans out there – lapsed or otherwise – get behind the team this weekend. Get out to Suncorp on Saturday night and show Kev and Will a lot of love, as we enjoy them in Red for one last time. And who knows? Maybe we will get to see another sneaky Genia breakaway try from the back of a ruck. I’d give anything to see Big Kev grabbing his Reds logo on his chest again and letting out one of his warrior-like roars after another Reds try. And I just pray, that this won’t be the last time we see their good buddy Quade take the field at Suncorp for the Reds and produce yet another piece of magic that leaves us all shaking our heads.