Reds v Crusaders- A Real Kick in the Teeth 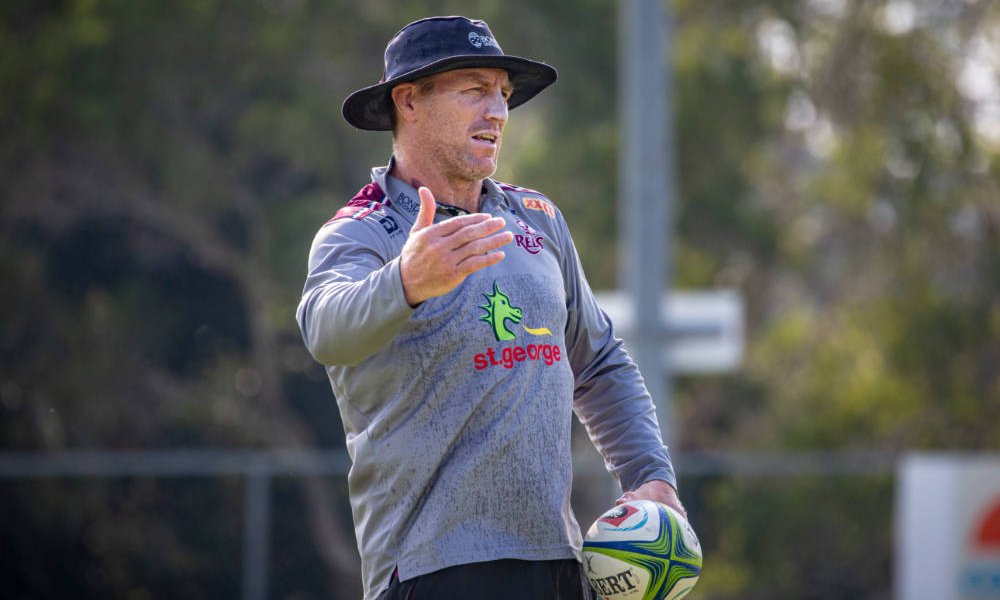 Reds v Crusaders- A Real Kick in the Teeth

With most people expecting not much more than a loss, the Reds travel to Christchurch to take on the behemoth of the competition, the Crusaders. Changes aplenty, some via injury, some via choice look to leave the Reds ripe for the picking in NZ. Can they pull off a memorable upset? Let’s find out.

The usual vocal home crowd met the Reds as they ran out onto the field with a swirling breeze threatening to play havoc. A couple of early kick errors in their own 22 put the Reds under pressure and it was a real time of living dangerously for the Reds. A short arm scrum penalty followed by the advantage on the next scrum led to what was almost inevitable when Joe Moody crashed over under the posts on a pick and drive. It was alarming that there was only one defender around one off the ruck. Mo’unga converted and it was 7-0 after 11.

Queensland worked hard after the restart and earned a penalty themselves after many phases that really didn’t go anywhere. From the lineout all sorts of space developed wide right and two passes later, Chris Feauai-Sautia went over. Jock Campbell missed the conversion and it was 7-5 through 16. The next phases post kick off were all Crusaders, a break saw the touchline just touched but the Crusaders then pinched the lineout and earnt a penalty just inside the 22 and in front. Mo’unga did not was the chance and we are 10-7 after 19.

It was clear that the Crusaders had cottoned on to the same attack principles as teams had in previous weeks- attack the wing of Henry Speight, who is prone to drifting in and bad reads . At least three of the good Crusaders breaks in the first half occurred down Speight’s side.

After some midfield to and from, Lukhan Salakaia-Loto made a rumbling break, brought down just short by Mo’unga. Multiple phases again led no where until Harry Wilson thought he had dived over. Ref Rasta didn’t think so but the TMO did and after the missed conversion from Campbell the score was locked up at 10 after 25. The question at this point is could the Reds continue to play like this and stay in touch?

The Crusaders looked out of sync and soon after the Reds were attacking again spending multiple phases going nowhere. How is it that the Reds attack looks fluid outside the 22 and pedestrian inside it?

As we crept towards half time, the Reds spilt the ball on the Crusaders 5m line and from the ensuing scrum, they nearly went all the way, only a bad pass to Sevu Reece cutting the attack short. The Saders maintained pressure and possession by the time the 10th phase had rolled around, had earned advantage. They nearly broke down Speight’s wing again after he drifted in but another 9 phases killed the advatage and was defused by a side entry.

From the ensuing penalty the Reds broke and Paisami was nearly away via a Salakaia-Loto offload but was dragged down and Wilson gave away the penalty the next phase by trying to make too much ground on the floor. Another penalty put the Reds 10m away with a lineout and got themselves another penalty just as the hooter was about to sound. Not trusting the boot of Campbell, they went a lineout and Crusaders no8 Tom Sanders put his hands where they shouldn’t. Ref Rasta showed his penchant for cheese and Sanders got a spell.

With the advantage, the Reds took a scrum but it came to nothing when a tiny knock on came from the excellent Salakaia-Loto, and it’s half time and 10 all.

Back from the break and the Crusaders had the early ascendancy and a penalty followed by a maul saw George Bridge fend off Speight, and wiggle through Paisami, Stewart and Lucas to score. Mo’unga with the conversion and after 45 it’s 17-10.

Far from the floodgates opening, the Reds hit back almost immediately, with some pressure in the right corner, combined with some unusually weak ruck defence saw Taniela Tupou pick the ball up and dive over. Again the conversion was missed, this time by Scott Malolua. 17-15 and will these missed kicks hurt the Reds?

Almost immediately the Reds were on attack again with a break and kick ahead by Wilson putting the Reds firmly on attack. Some 14 phases led to nothing and the Crusaders negated the threat and cleared. From the clearance the Crusaders struck with a long range try, a break involving three or four players down the left was finished off by Lester Fainga’anuku and Mo’unga didn’t miss. 24-15 to the Crusaders after 55.

The Reds were hanging on gamely but their lineout was really beginning to let them down. Harry Wilson and Taniela Tupou in particular were excellent and making metres up the middle. In the 63rd minute the Reds again ignored a kickable penalty and took a scrum which fizzled out when Taniela Tupou was penalised, perhaps harshly for collapsing.

When you thought that maybe the Reds were petering out, the game was brought back to life with a long rang Reds try. Fraser McReight put Harry Wilson into a gap deep in his own half and Wilson busted through some flimsy defence. Wilson fed Speight who got it to Hegarty. Speight backed up inside and was over.  Hegarty, who was the third kicker of the night, missed as well and it is 24-20 Crusaders with seven minutes left.

The last seven minutes played out as you would expect. Frantic attack from the Reds leading to excitement- a Daugunu break and offload to Tupou got the blood flowing especially. The Crusaders hung on and the Reds were left wondering what should have been. By the time the whistle blew in the 84th minute, they were out on their feet.  A late scare when it looked like Reece went over from a strip was negated by the TMO.

Let’s not beat around the bush here, this was an epic Reds performance let down by the kicking. The Reds attacked with flair and purpose and defended gamely throughout. Brad Thorn had the right game plan and adjusted his lineout when it misfired. The Reds a few weeks ago folded when they were scored on by the Jaguares and it all fell down. Tonight they didn’t. They all kept working and it will be an awfully bitter pill for the team to swallow.

The Lester Fainga’anuku try was the nail in the coffin but the actual turning point was probably in the first half when the kicking woes of Jock Campbell resulted in two missed conversions and two spurned penalty shots. Add these to the missed conversion by Malolua and another spurned chance in the second half . The game was geuninely in doubt until the very end.

Lukhan Salakaia-Loto played very well today, and mostly avoided the lazy penalties that had crept into his game lately. He made a couple of big breaks and nearly put Paisami through for a try. He took it to the Crusaders pack and looked every bit the Wallaby he is. Harry Wilson was a very close second for his mamoth 80 minute effort.

Other than his goal kicking, Jock Campbell was also very solid at the back, making a few nice runs and putting defenders in two minds. If Tom Banks wasn’t playing so well himself, Campbell would be in the conversation. No James O’Connor and limited Tate McDermott meant the attack had to come from elsewhere and Campbell and Hamish Stewart both stepped up. Chris Feaui-Sautia was excellent, finishing for the try and generally getting himself more involved off the wing.

Tom Sanders in the 40th for hands in the ruck, and a consequence of multiple penalties given away.