Weight for age in junior rugby – what’s it all mean?

Weight for age in junior rugby – what’s it all mean?

All of us would have to been hiding under a rock over the last week to have not seen the much bally-hooed release by Rugby Australia of the changes to junior grading in the U10-U15 age group that can see players moved up or down based on an assessment of skill and weight. But is it all a mirage? Let’s look at the questions I have with the system as I understand it, and work through a bit of a scenario using my son’s age group at his local club. This should be a decent enough microcosm that I would expect should reasonably apply across most junior clubs. But first a quick summary of how I understand it based on the few details available:

Players in the U10-U15 age groups will be able to moved across four levels, (one down, current level and two up) based on size, experience, maturity and skill, assuming they fall outside a scope of height and weight to begin with. They will be then assessed by independent coaches on the criteria listed above and moved around accordingly. That’s basically all I know at this point, and unless you have an inside route to Rugby Australia offices, it is probably all you know as well. Which leads me to questions-

Q1) The announcement is a bit late isn’t it?

I note that the release of this new plan occurred in the same week as many of the junior clubs in the Brisbane area began training again in these age groups, so I would think there’s some risk of processes being sped up or flat out botched if the plan is to have some of these assessments done prior to the first set of games.

Q2) Who are these independent coaches anyway?

Again this isn’t clear, but one would assume it would be staff from any of the myriad of “training academies” that operate outside of the club structures. If Sydney is anything like Brisbane, most clubs have some connection with these people given the small nature of the rugby community so how easily will true independence be found?

Q3) Do the players in the upper age bands even need this?

Now this is specific to the U14-U15 age players. In my experience the skill gaps tend to be narrower from this point on and size becomes less of a factor as well. Not to say that it’s irrelevant, especially for someone new to the game. In my view this would probably have been more effective in the U8-U12/13 cohort, where one bigger/faster/stronger (particularly faster) can utterly dominate games to the level where it becomes a farce.

Q4) What are the height/weight markers anyway?

I’ll go into this in more detail shortly with my example but one of the great things about rugby is it really is a game for all sizes, and as you move into the upper end of the proposed band, tall locks, stout props and small yappy halfbacks do start to differentiate themselves. Obviously puberty can be a great influence here, with large growth spurts meaning a prop suddenly become a centre, but this is again unlike the younger age groups where one size usually fits all.

My son will be in the U15 age group this year- it’s a medium sized club in the Brisbane sense- with anywhere from two to five teams per age group, that tend to thin out as the ages go up. I’d call it middle of the road in terms of success and production of representative players. Now my son is an average player, never made a rep team, and unless some miracle occurs, never will. He’s fluctuated between the top and bottom side at his club and to be honest is more about playing with his mates than wearing a rep shirt.

The rest of the age group is pretty broad- with kids ranging from perhaps 50kg to our largest player who tips the scales at around 110kg. He is what would be considered a gun, and when his mind is right can turn games around with aggression, pace and skill. In terms of height it’s is fairly similar story with around 35cm across the bunch. A couple of these kids are just over 6ft in the old money. Last year we managed to put out 4 or 5 rep players, across a few positions including prop, lock, flanker and halfback.

Reg has posted a picture of his son in a rep team (below) dwarfed by the giants around him, and pointed out the size difference. But as I understand it, he wouldn’t be moved down or up as it stands because as a rep player, there’s an assumption that he’s at an adequate level. In fact, could you argue that as a rep player, he could be moved up? It’s an odd one, as size wise he’d possibly fall in the lower category but as a rep player he’d more than likely destroy them. 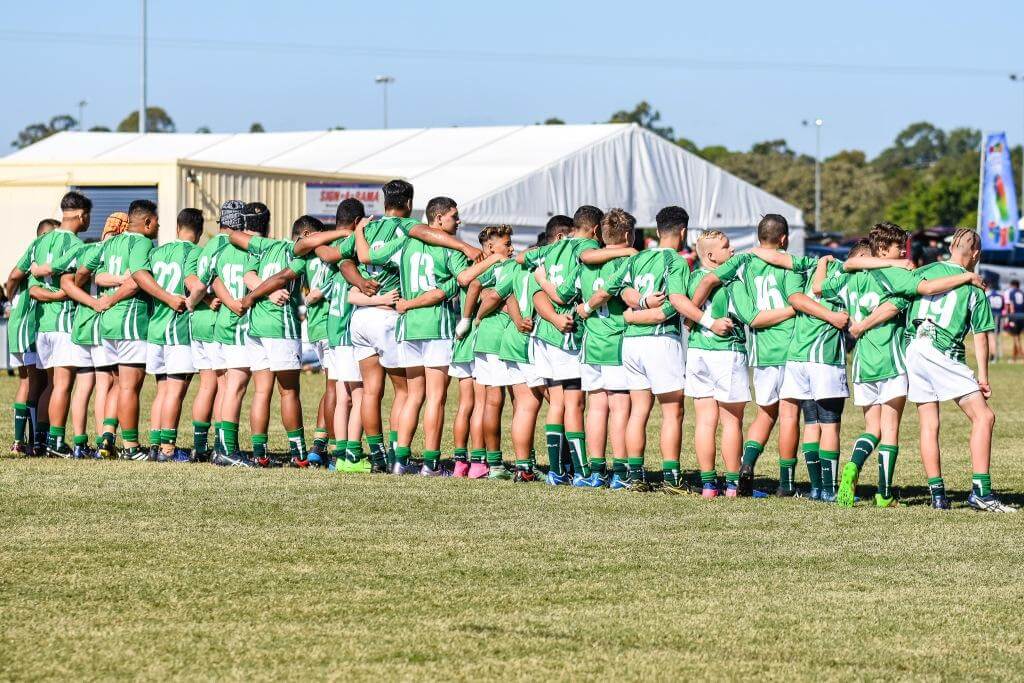 Even my decidedly average son who scores once every three years and plods around wouldn’t be a candidate as he is neither too big or too small- he’s maybe 5 foot 9 and 85 kgs.

While you’d think my 6 foot, 110kg lock might be an option to go up, experience tells me that while he may dominate at age level (and even this has diminished over the past few years), he would struggle with the physical maturity playing a year up.

I’ve been lucky enough to be involved with managing rep teams over the last four years or so, and you tend to stand there looking at the next age group up thinking they are enormous and the one below you is tiny, compared to all of your own squad.

This is also why despite there being eligibility built into it, there were very few U14 players picked for the three Queensland sides at the Junior Gold Cup last year, my figures aren’t exact but over the 75 odd players there would only have been a handful of U14’s there, and almost no forwards.

So if we go back to club land, I honestly can’t see any of the players in our year level at our club being moved either up or down. One reason is we have two squads so can pick appropriate divisions within the comp to aim for, and simply, almost none of the squad would have ticked enough of the boxes to justify the move. Our smallest player plays on the wing and struggles at times but in the same breath it isn’t dangerous for him to be out there in any way.

Now there are always going to be exceptions to this but even our most gifted player in terms of size and destructive power would likely struggle to adapt to a higher level if made to play up a year let alone two.

All in all I think that there are still too many uncertainties in the Rugby Australia plan to make a truly fair assessment but if you use some common sense and start to really look at the criteria it seems fairly clear that only those who are either absolute clear cut stand outs or those totally new to the game at this late age are likely to be caught out. Even less so if your child plays at a club that happens to have two or more teams in the age co-hort. Kudos to Rugby Australia for finally trying to grasp the nettle on this, but in all likelihood, this will be much ado about nothing.