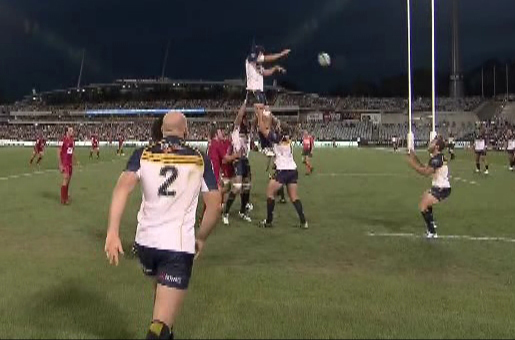 I’ve said it many times before but the outcomes from lineouts can have a major impact on a match and that’s really well demonstrated by looking at two matches played last weekend. 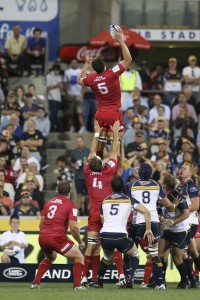 A rare good one

By halftime the game should have been put away and one of the key reasons it wasn’t was the fact that Ireland could only win 60% of their lineouts in the first half. The four lineouts Ireland lost in that half were all within 25 metres of the Scottish try line – the Irish had done all of the work to get into the right field position to score but couldn’t take advantage of the opportunities.

The statistics show that in international matches just over a quarter of all tries come from possessions that start with a lineout. We’ll never know if Ireland could have scored points from any of those possessions had they won the lineouts but there’s a fair chance that with four additional opportunities to attack inside the Scottish 22 points would have flowed.

So how did Ireland lose those four crucial lineouts? When I watched the game live late the other night I considered that the issue was with Rory Best’s lineout throwing and I made that comment in the Six Nations thread on the G&GR Forum. It’s the easy conclusion to come to when a lineout isn’t performing that it must be a problem with the thrower but having watched the match more closely I changed my view. In that match Best threw well in 15 of 17 lineouts (88%). In the first half lineouts he threw well in 8 of 10 lineouts (80%).

The two throws Best got wrong in the match were two of the four Ireland lost when in good attacking position in that first half so he bears some responsibility but the other two losses were a result of great defensive lineout work by the Scots to get up in front of the Irish jumpers. The pressure being excerpted by the Scots at lineout time no doubt contributed to the two throws Best got wrong so Scotland’s strong defensive lineout performance had a real impact on the match.

The second match I’ll look at is the Rebels v Brumbies where the Brumbies won 90% of their lineouts and the Rebels 82%. It would be easy to look at those statistics and believe that the lineout performance of both teams was quite even but nothing could be further from the truth – the Brumbies dictated proceedings in the lineout contests and the lineout outcome changed the way the match was played.

Lineout outcomes are about more than just whether the ball was won or not. You also need to consider whether the ball was delivered cleanly when it was won – in this match the Brumbies secured clean ball from 80% of their lineouts whilst the Rebels could only secure 65% clean ball. Trying to attack without clean ball is very difficult as any time you had to initialise your first phase attack is lost whilst players (normally the halfback) scramble around trying to secure the ball. This usually results in a loss of territory on the first phase which puts the opposition on the front foot in defence.

The other consideration when judging lineout outcomes is where in the lineout the ball was won, which impacts how you can attack on first phase. At the start of this match the Rebels clearly came out with a plan to attack wide and for the first twelve minutes that plan worked well but the majority of that wide attack came on the counter or from general phase play. To continue that wide attack plan the Rebels needed to win their lineout ball and they ideally needed the ball delivered towards the back of the lineout.

The Brumbies set their lineout defence up to largely take that option away, whilst leaving the front of the lineout relatively open – effectively giving the Rebels the front of the lineout. In the first four lineouts the Rebels threw they were only able to win one (25%) which took away any opportunity to attack. In the remaining thirteen lineouts the Rebels had in the match the Rebels threw to the front in ten (77%). Whilst this allowed the Rebels to win 100% of their remaining lineouts in the match, with the ball delivered at the front that took away their ability to attack wide effectively and with that option taken away the Rebels lost a lot of their potency in attack. This was very good tactics by the Brumbies and you would have heard Nathan Sharpe explaining these very points in commentary.

The effect the lineout outcomes had on this match overall shows that whilst the tactic many people argue for of throwing the ball to the front jumper may lift the percentage of lineouts won and it may even lift the percentage of clean ball won, it will hinder a team’s attack capabilities. That’s why successful teams have a good lineout thrower who can accurately throw the ball towards the back of the lineout and spend so much time getting their lineout functioning well.

In the first two rounds of Super Rugby the Brumbies have been excellent at the lineout – both in attack in defence. They have won 21 of 22 (95%) of their own lineouts including 20 of 22 (91%) providing clean delivery with Stephen Moore throwing really well. Whilst their opposition teams have won 27 of 31 (87%) only 17 of 22 (77%) have provided clean delivery.

The Brumbies have used their defensive lineouts in different ways in the first two rounds. Against the Rebels they were happy to let the Rebels win clean ball at the front of the lineout but in their first match the Brumbies really attacked the Reds ball at source and restricted the Reds to only 43% clean ball, no matter where they threw in the lineout, which curtailed the Reds first phase attack by providing back foot ball for Quade Cooper, which doesn’t suit the Reds attacking style.

Whilst the Brumbies have excelled at the lineout the other Australian teams have struggled to produce clean ball. The statistics from the matches so far are shown below:

Are these poor clean ball statistics caused by issues with the lineout throwers, lineout structures and strategies or opposition defences?

As I’ve already mentioned most people start by focussing on the lineout thrower. In assessing the performance of a lineout thrower you have to bear in mind that a lineout can be lost despite a good throw if the opposition defend well or the lifters and jumpers get it wrong. Similarly a bad throw can still result in a lineout win if a jumper can rescue a ball thrown to the opposition side of the lineout or if the ball is overthrown and is caught by one of the players who didn’t even jump for it. Looking at the percentage of lineouts won or of clean ball delivered does not necessarily tell you how the thrower performed.

Clearly if the ball is not straight or falls short it is the fault of the thrower. Assigning responsibility for timing of the throw and overthrows is more difficult but there are three keys in working out who was at fault:

For Australian rugby fans the debate as to who is the better lineout thrower between Tatafu Polota-Nau and Stephen Moore always creates a passionate debate. Fans of Polota-Nau believe that he is unfairly labelled a poor lineout thrower and has improved in that area significantly over the last few years to the point that if it was ever the case that Moore was the better thrower, that is no longer the case. Others argue that his performances around the field outweigh any difference in lineout throwing performance.

I don’t agree with either proposition and despite what Waratahs fans may think that is not because I’m a Reds fan – it is because an objective assessment of lineout throwing performance shows that Polota-Nau continues to be a poor lineout thrower. Note that I don’t say that ‘he can’t throw’ because that is incorrect.

Here’s a link to some analysis I did last year on the comparative lineout throwing performance of Polota-Nau and Moore showing only 57% of Polota-Nau’s throws in the test series against Wales were good throws. 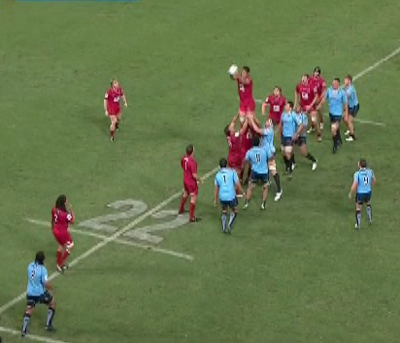 The comment was made in the forum this week that statistics found at www.rugbystats.com show that the claims about Polota-Nau’s poor throwing did not hold true in the match against the Reds. Those statistics suggest that the Waratahs as a team only lost one lineout and that only one lineout was lost when Polota-Nau was throwing. If that were the case I’d agree that was a pretty good performance. However if you watch the match again you’ll see that the Waratahs actually lost three lineouts – in the 21st, 33rd and 46th minutes.

All three of those lineouts were thrown by Polota-Nau and included poor throws. The lineout in the 33rd minute was called to Dave Dennis and whilst Sekope Kepu got in position to lift this was Mitchell Chapman’s first lineout on the field and he failed to turn and lift. Even if Dennis had been lifted the throw was always going to be short and ended up being an easy catch for Simmons so the responsibility for the loss is shared.

In addition there were three other throws from Polota-Nau that were poor which still resulted in wins for the Waratahs largely due to good work by Dennis and Kane Douglas. That’s only 6 good lineout throws of 12 (50%) from the Waratahs in that match. John Ulugia threw two of those lineouts and both were good throws leaving Polota-Nau with only 4 good throws from 10 (40%).

Using the same analysis methodology here are the lineout throwing results for all Australian teams in the first two rounds:

As you can see whilst the Force, Rebels and Reds have some work to do to match the Brumbies in the throwing department, the lower percentages of clean ball being won by those teams has more to do with the structures and strategies they’re using that are allowing the opposition to disrupt their ball rather than lineout throwing.

The Reds in particular need to lift their lineout performance to provide their backline with some quality ball to attack with. I marked Saia Faingaa as having thrown well in 100% of lineouts against the Brumbies and 75% against the Waratahs so lineout throwing is not a major issue for the Reds but they cannot keep operating with 50% or less clean delivery of ball like they have over the first two weeks of the competition.

The problem for the Waratahs was not the fact that Sitaleki Timani was hindering their lineout in this match as some have suggested – yes the lineout was better once Chapman came on the field but the problem was largely the poor throwing performance of Polota-Nau and I thought the Waratahs did well to win 75% of their lineouts despite those issues.