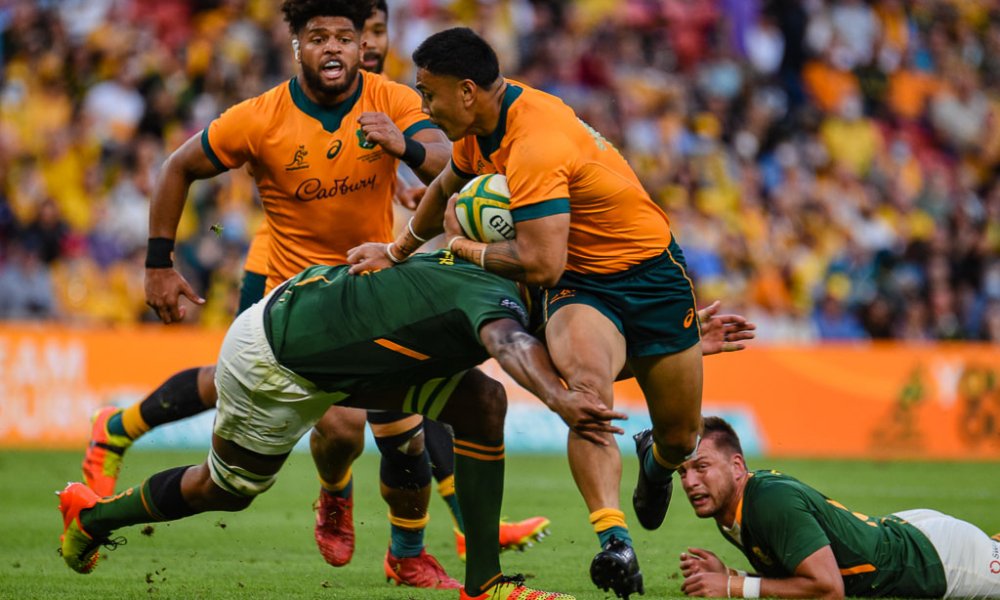 After last week surprise win by the Wallabies, the Springbok will be keener than ever to live up to their World Champ tag.

The Boks immediately showed a change of game plan. Ditching the midfield kick in favour of running the ball and kicking to the corner instead of taking the shot at goal. But it was the Wallabies who were first to score after Etsebeth had flubbed their chance at the other end by crawling along the ground. Len Ikitau went over, after a series of penalties, marched his side up the field. Ikitau slipped the tackle and used his acceleration to power over the line.

Len Ikitau was in minutes later as well, after a pretty build up from most of the Wallabies. The Australians were playing well up until another card to Swinton for a high shot. This was Swinton’s third card in about half a dozen tests.

After the second try, the springbok put away their running game and started assembling points off the boot. Australian full back Tom Banks had to leave the field with what looked like a broken arm, trying to defend one of the many kicks South Africa booted his way. The score at half time was 15-12 to Australia.

Australia lost their three point advantage just seconds into the second half. They upped the tempo and De Klerk dink a little kick through the defence for Lukhanyo Am to run on to. Hodge who was filling in for Banks was in the line defending and no one covered fullback.

After a long period of both sides trying to out muscle each other, Marika Koroibete ran on to a beautiful off load from want to be flyhalf Taniela Tupou and ran the ball around closer to the posts for Cooper to convert.

Koroibete was in for his second not long after as Australia started to control the play. You couldn’t call it domination, but they definitely looked in control at 30-17.

Australia absorbed a lot of pressure to finish the match with a bonus point. It seemed like South Africa weren’t used to having to score tries and were more used to accumulating penalties.

For Australia the usual suspects stood up. Hooper was his usual amazing self and was Tupou who played 78 minutes. White a Cooper didn’t seem to mesh as well as McDermott and cooper but it was a minor difference. Phillips gave away a few penalties and Swinton needs a rocket up him for being a card magnet. Hodge blew the chance he got with Banks’ injury. Kerevi was a little quieter but still dominated and managed to bring Ikitau into the game more. The wingers were excellent and shouldn’t be changed except for injury.

I’m going to give our man of the match gong to Michael Hooper who topped the tackle count and has taken a step up in his Captaining of the team.