Aerial Ping Pong at the SCG 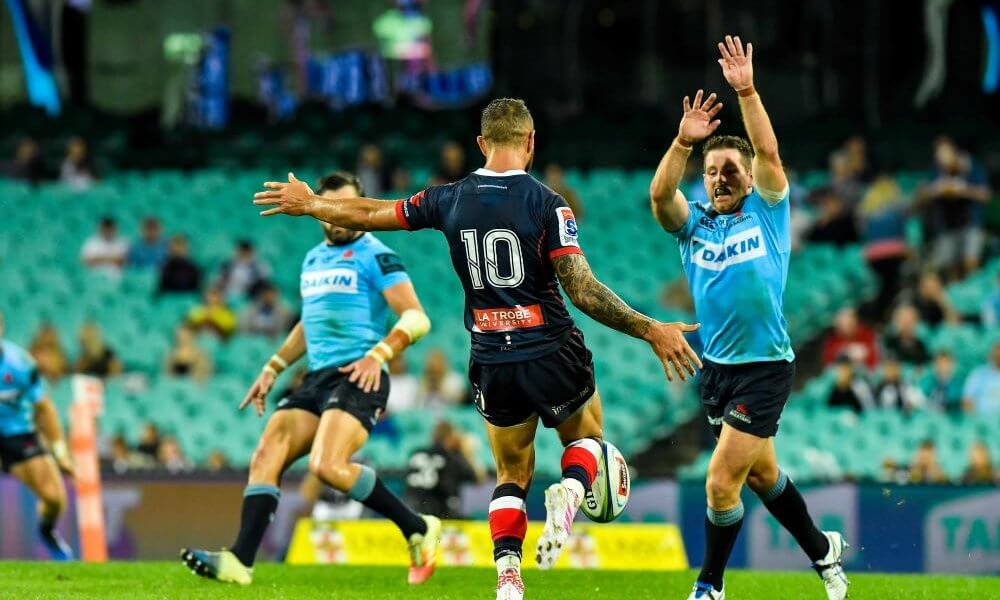 Aerial Ping Pong at the SCG

No, I’m not talking about the Sydney Swans with this title. I’m talking about the Waratahs home game against the Rebels on Saturday which has been described by many as a “kickfest”, particularly in the first half. When the ball is slippery (as it apparently was on Saturday despite being a rainless day), a minigame of “aerial ping pong” often results. This involves both teams trading kicks out of a preference to play for territory rather than possession as handling is difficult.

The Waratahs are probably the Australian team with the greatest historical preference for making this trade-off even on dry days. The team losing on territory tends to have a minor off-setting advantage in that kicks received inside the 22 can be put out on the full, while kicks received outside the 22 need to bounce before going into touch. Aerial ping pong does not make for a good spectator sport due to the fact that the game devolves into a stop-start affair characterised by a series of lineouts separated only by a handful of kicks.

Fullbacks are very important in such a game, but for varying reasons both teams were playing second-choice fullbacks. Kurtley Beale and Reece Hodge stepped in for Israel Folau and Dane Haylett-Petty, and ironically made this article ideal as they are both better kickers than the players they replaced. Considering that these two teams contain the vast majority of the Wallaby backline (especially those with notable kicking talent), this analysis is essentially of the best kicking skills that Australian rugby has to offer.

An aerial ping pong minigame starts when there are at least 2 kicks in sequence and ends with the ball finding touch. It is also possible for a kicking contest to conclude with the ball being taken into contact, however there was never more than 1 ruck separating kicks in a kicking duel on Saturday. Contestable kicks for height rather than distance do not count for the purposes of this facet of the game.

The first minigame begins about 1 minute into the game with Foley clearing the ball from about 27m out. Hodge takes it about 23m out, meaning that Foley’s kick was approximately 50m in length. Hodge’s return kick stops dead about 1m out from the Waratahs try line for a distance of well over 60m, and Beale puts the ball out about 7m from the halfway line.

A second kicking contest begins in the 2nd minute. This one is difficult to analyse because the initial kick is a box kick, the return kick from the Rebels is a high ball, and the sequence ends with Adam Coleman conceding a penalty for offside. Bernard Foley fails to put the penalty kick into touch and the ball ends up where it started – with the Waratahs, about 10m inside their own half. I’m not sure if this strictly counts as aerial ping pong but in any event the outcome is neutral. 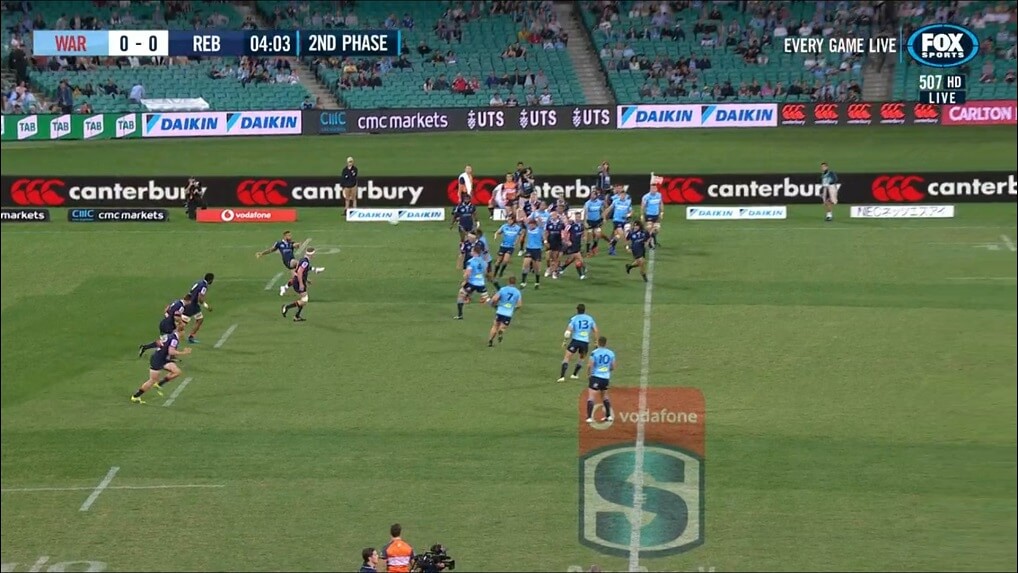 A few moments later, Quade Cooper kicks the ball on his own 10m line (above). Cameron Clark clears it from just inside his own 22 and puts it out just over halfway.

Hodge kicks the ball deep off the back of a 9th minute scrum. His kick from 26m out is returned by Beale from about 10m out, resulting in a Rebels lineout 45m from the Waratahs try line. It is notable that deep kicks are particularly effective from scrums (and 8-man lineouts) as the defending backs can be forced into the defensive line and out of their backfield cover positions. 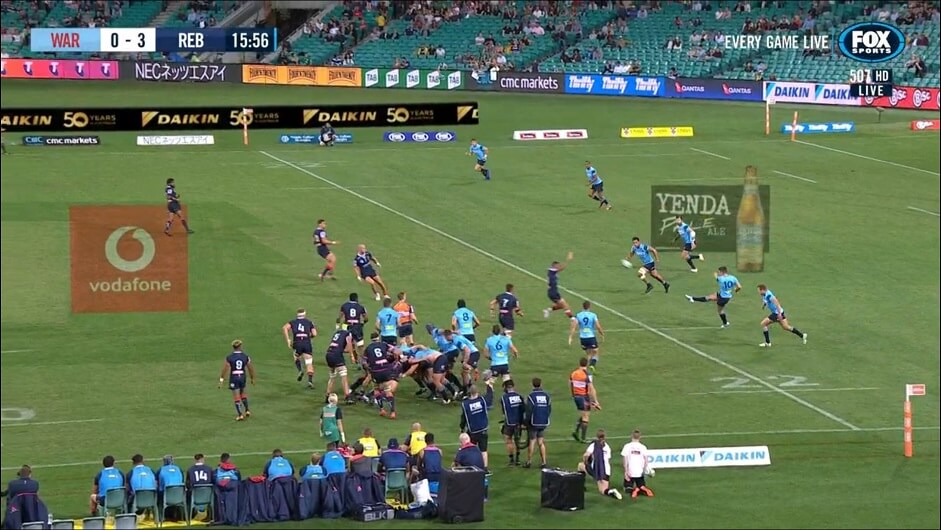 The Waratahs get a scrum of their own in the 15th minute and Foley is quick to put boot ball from 20m out (above). The ball is fielded by Campbell Magnay (who has come on for the injured Jack Maddocks) inside his own 22 and put out 5m into the Waratahs half.

This is almost an identical result to the previous scrum where the Rebels kicked, and the 4-5m discrepancy can be put down to Hodge’s incredible kicking distance.

A lengthy kicking contest begins on the 36th minute from a Waratahs 22m drop-out received by Hodge on his 10m line. He puts the ball high and Beale takes it about 32m out from his own try line. Gordon puts up a high box kick which is taken by Hodge about 5m onto the Rebels side of halfway. Genia releases Hodge with a pick-and-go phase and then puts up a high box kick himself, which is taken by Beale about 9m into his half. Gordon puts up another box kick, this time for length. It’s caught by Genia about 30m out and Beale takes it in his own 22 – essentially back where the Waratahs started. However, there is absolutely no chase from the Rebels and Beale’s return kick results in the ball being put out 11m into the Rebels half.

Straight away in the second half, the backs resume their kicking duel with Cooper kicking for distance from about 29m out. The kick is taken by Beale who puts it out 7m past halfway.

The Waratahs receive a restart in the 49th minute and Beale quickly returns it from 24m out. His kick is fielded by Cooper, who returns it to Beale about 17m from his own try line. Beale is now inside his 22 so he puts the ball out on the full about 13m into the Rebels half. 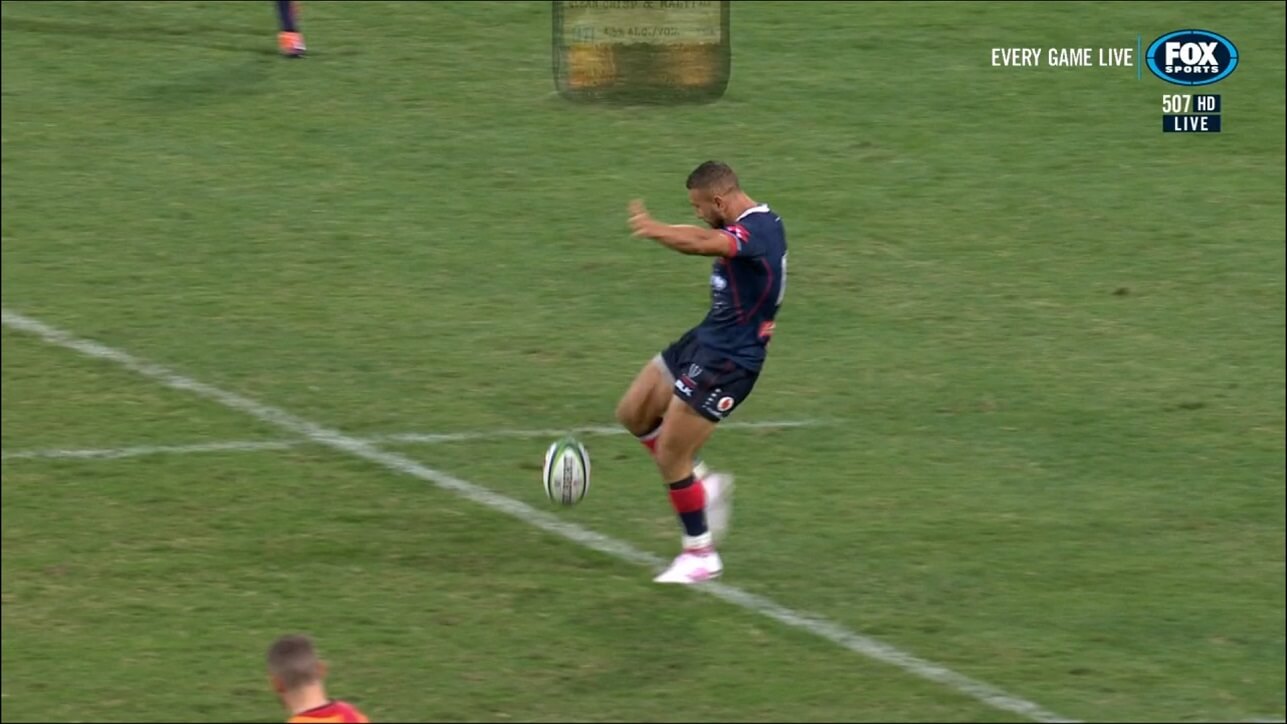 The lineout ball from the previous contest is immediately tossed to Cooper who kicks it from about 24m out himself (above), and it is again fielded by Beale on his 10m line. It finds Cooper just inside his 22 and Cooper puts it out 1m over the halfway line.

This kick was contentious as the tip of Cooper’s boot was just over the 22m line. The rulebook says that the 22-metre line “includes the 22-metre line” and the heel of his boot is inside the 22 in any case, so it comes down to whether putting his toes over the line meant that he was outside of the 22. The rulebook does not provide clarity on the issue of the ball carrier being simultaneously inside and outside of the 22, though the FoxSports commentators were strongly in favour of Cooper having stepped out of his 22. That is contrary to how most other lines work in rugby – a player with 1 foot in touch and 1 foot in the field of play will be in touch, and a player with the ball partially on the try line and partially short will have scored a try. The corollary of this is that a player with 1 foot on both sides of the 22 will be inside the 22. As a result, I will stick with the actual outcome rather than a theoretically different one.

The Rebels defensively ground the ball 56 minutes into the game and Hodge takes the drop-out quickly. Rona returns it from about 28m out and it bounces awkwardly out of the Rebels 22. Genia takes it into contact for a phase and then stabs a grubber out 5m into the Waratahs half. This is only dubiously a kicking duel as the initial kick was a drop kick and the third kick was a grubber, but very little else happens in this phase of play. 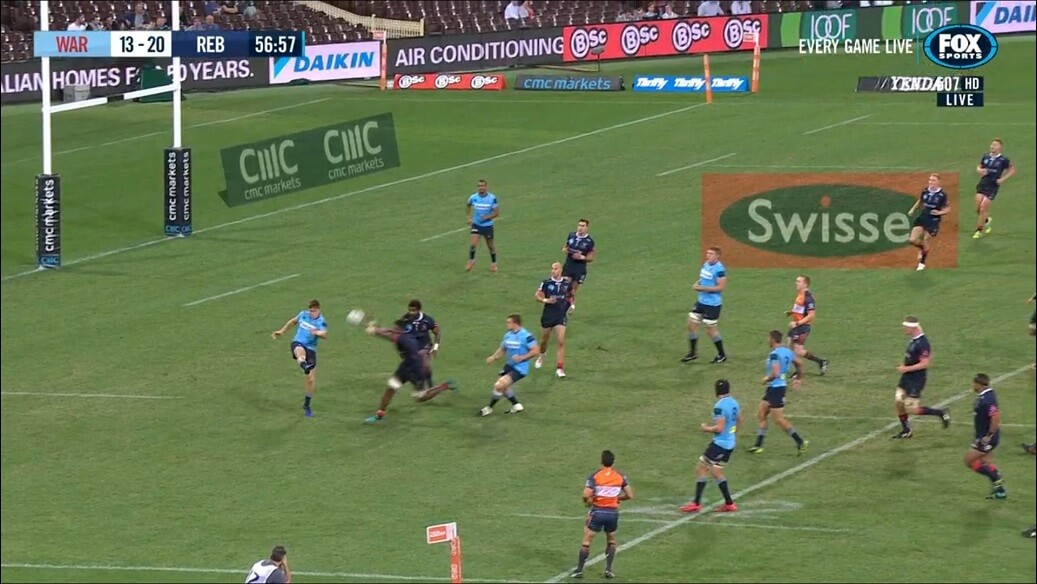 Off the ensuing lineout, Cooper kicks the ball from halfway and it is returned by Alex Newsome under pressure from about 11m out (above). It lands in touch 7m from halfway.

The Waratahs feed a scrum in the 60th minute, and Gordon boots from 26m out to just outside of the Rebels 22. Hodge returns it from about 25m out and Foley returns the kick from inside his own 22. Genia receives it and makes his own kick about 15m from halfway. Unfortunately, Genia whiffs the kick and it goes out on the full 11m into Rebels territory.

There are no kicking contests in the last 20 minutes. In total there were about 11 occasions in which players from both teams kicked, and all of them ended with lineouts. The Waratahs conceded possession to the Rebels 3 times in exchange for an average of 31m gained, while the reverse only occurred once for 33m. We can derive from this that holding the ball is worth less than about 1/3 of the length of the pitch.

The 7 kicking duels which resulted in the instigating team receiving the lineout throw also created field advantages for the same team, with the Rebels averaging 17m (5 times) and the Waratahs averaging 30m (2 times, including the time where Genia put the ball out on the full). 7 of the 11 minigames of aerial ping pong began directly from set pieces (scrums, lineouts, kick-offs, and 22 drop-outs). 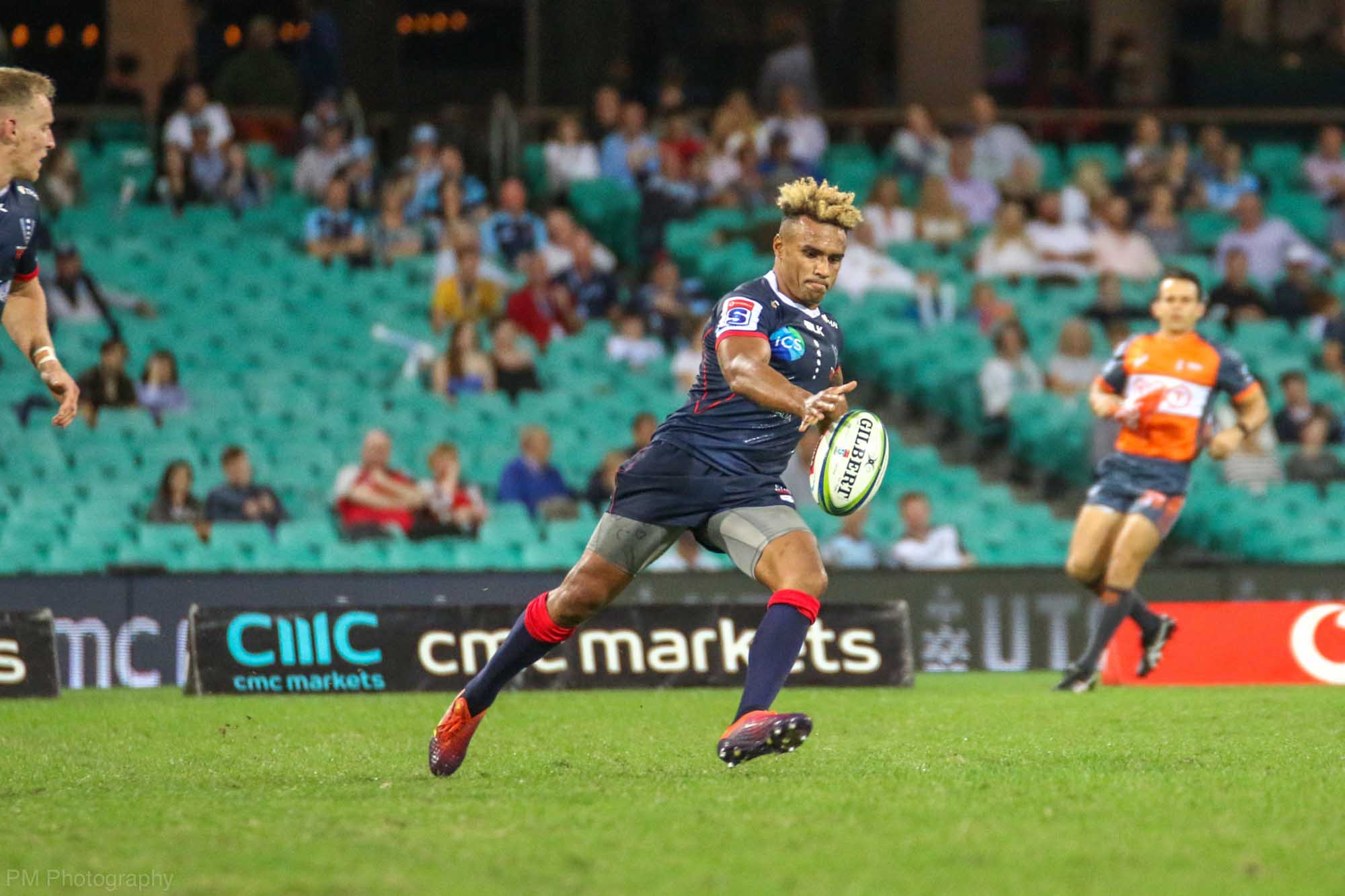 Genia with a clearing kick.

Similarly interestingly, only one kick (by Newsome) is taken by a player not wearing 9, 10, or 15. There were also kicks that did not become duels which should be factored in when considering the effectiveness of a particular kicker’s game, such as the 37th minute kick by Genia which led to Hodge’s try and the 61st minute kick by Foley which resulted in the receiver (Cooper) being dragged into touch by Michael Hooper. Most kicks into the opposing 22s in these duels were aimed directly down the middle of the park, and I can only assume that this was to increase the distance between the receiver and the sideline. No kick received in a 22 stayed in play beyond the clearing kick.

If both teams have functional lineouts (14/16 own lineouts won by the Waratahs and 13/15 won by the Rebels) and defensive lines (19 missed tackles and 17 missed tackles respectively), the kicking duel will always be an option. It is a lot easier to have the same 3 players pump the ball downfield than to organise complicated attacking structure and risk turning the ball over. The question of why other teams aren’t kicking as much as we saw on Saturday simply comes down to the fact that the premier counter-attacking fullbacks of each team weren’t playing. By the same token, you rarely see the Highlanders engage in lengthy kicking duels as they have the likes of Ben Smith receiving the ball. The dewy ball increasing the likelihood of handling errors may also have had something to do with the tendency to kick away possession, but it was a rainless day and it does not bode well that the upcoming Rugby World Cup will be taking place in Japan’s rainy season – and their rainy season is rainier than any in Australia by a longshot.