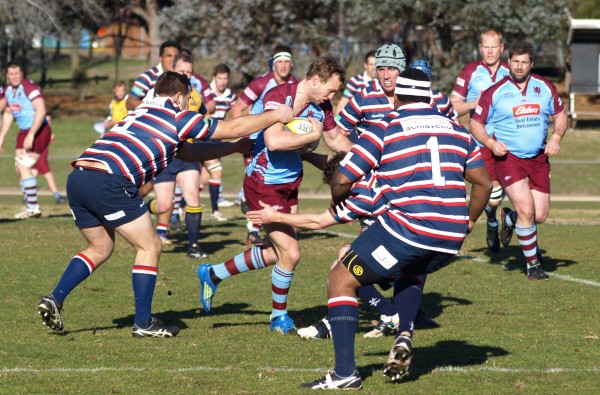 Jake White has attracted quite a lot of praise in  local rugby circles for his work with the Brumbies. His support for local club rugby in Canberra should also be applauded, with Brumbies players taking the field with local players, bringing a touch of class for spectators and competitors alike to enjoy. Thank you, Jake and Brumbies.

On to the matches. 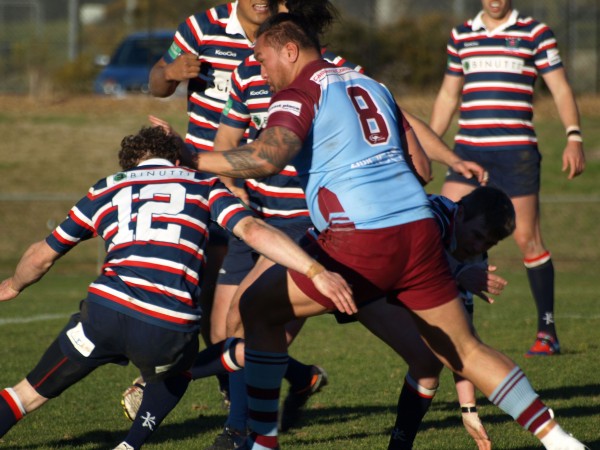 Duncan Fallon (12) and Lachlan Glenn (9) of Easts tackling West’s Fotu Auelua. With thanks to Katinka Bradstreet

This match saw five Brumbies players take to the field, with Peter Kimlin, Jesse Mogg and Fotu Auelua for Wests. Jerry Yanuyanutawa and Andrew Smith donned the red, white and blue for Easts.

The match started at a frenetic pace, with early collisions heavy and frequent. Wests were able to push over the line from five metres out to take first points.

Easts then from a great break by Andrew Smith and Matt Giugni found themselves in the Wests red zone. It was here that Wests conceded three penalties on the line. As usual, yellow cards seem to be in short supply irrespective of team or incident.

Easts failed to capitalise on the position, and Wests broke out. In what summed up the match to a large degree, Wests simply made too much headway with each touch of the ball — they were too big, strong and fit for the much smaller Easts team.

Fotu Auelua was prominent, terrorising the Easts defence with his 120-plus kilogram bulk and making huge inroads with each touch. An honorable mention should be made of Duncan Fallon — the Easts player knocked unconscious by big Fotu in the pre-season and reported in the Canberra Times. Fallon didn’t shirk away from taking on Fotu and brought him down on several occasions singlehandedly with textbook anklebiter tackles.

The second half played out in much the same way, with the size, fitness and speed of the Lions proving far too much for the Easts boys. Wests by now had well and truly put the result beyond doubt, and allowed many of their second grade players time on the pitch.

As has been the case in the majority of games this year, Easts were never in the hunt. Wests were too big, strong and clinical across the park — Fotu Auelua most prominent for the home side. For Easts, there were a few bright sparks — especially Duncan Fallon who continues to impress with his tough tackling, running and attitude. 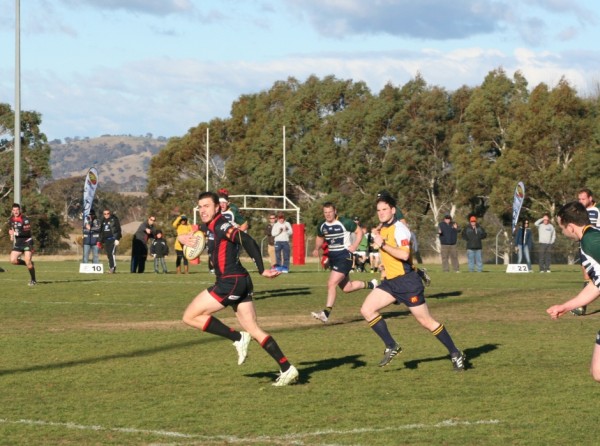 Cam Crawford streaks away for the first of his two tries

Nicholls Oval saw the third-placed Gungahlin Eagles take on the fifth-placed Uni-Norths Owls. Both teams had a number of Brumbies squad players returning to club rugby, with Ben Alexander joining Ian Prior in the visitors and Ita Vaea and Cam Crawford suiting up for the hosts.

With the Nicholls Nor-Wester at their backs, Uni-Norths dominated both field position and territory in the first half. Some rugged defence from the Eagles held out wave after wave from the Owls and it took only one chance in the Owls’ half for Eagles winger Cam Crawford to streak away untouched under the posts to open the scoring.

It was another mistake from the Owls at the back that led to the Eagles scoring again. This time a kick was not secured and a simple toed-through ball was picked up. The Eagles saw the score at 14-0.

The second half saw both teams step up their play with some physicality being thrown in for good measure. The referee was having a tough day and could have used his cards more than he actually did. Three yellow cards were issued on the day — two for Uni-Norths and one to Gungahlin — although many warnings were given, some for repeated indiscretions, that left supporters of both teams less than impressed and offering some friendly advice to the referee.

As the half wore on the Eagles seemed to lift their game with their defence leading the way. Another two tries were added for the Eagles with one from long range after Uni-Norths were camped on the Eagles line and looked like finally breaking their duck.

Right on full time, Waratahs-bound Crawford clinched his second of the day with another runaway effort untouched under the posts to make the final score 35-0.

The final scoreline seemed harsh on the Owls but it was their lack of execution and failure to score points with the wind at their back, plus the Eagles defence, that saw the score end up the way it did.