Welcome to another semi-regular segment you will be seeing in 2012, the Monday Top 10- a collection of observations, analysis and predictions from the weekend’s round. So let’s get stuck in:

10. My game of the round was easily the Crusaders v. Highlanders at the new stadium in Dunedin. The atmosphere looked fantastic and the game delivered the sort of spectacle you expect to see far later in the season. It was physical and skilful with some cracking tries scored. The Highlanders are a collection of plucky no-names (with a few exceptions) but by jeez they can play, and I expect them to be there at the business end of the year. The only teething problem they need to fix is the scoreboard clock!

Hougaard, winner of the first Red Card of the season

9. The Bulls have surprised me with how they have started the season. They lost a few big names from last year, but have not missed a trick and are now on top of the Bok conference. Their demolition of the Cheetahs was impressive considering they played the last 20 minutes with 14, and the last 10 minutes with just 13 players. Zane Kirchner played the best I have seen him, and their forwards have only gotten bigger and meaner over the offseason.

8. The worst game of the round? Force v. Reds hands down. A wet, scrappy game dominated by errors. The Reds will take the win but once again look scratchy in the early rounds and were lucky to escape with the win. Their defence went from the sublime against the Tahs, to the ridiculous with some soft missed tackles leading to Force tries. Let’s hope they get their shit together soon.

7. Adam Byrnes got ten weeks for his eye gouge on Tom Carter. Good riddance I say. The bloke is a cheap-shot merchant and I have no sympathy for him. I actually think the Rebels will be better off without him. Throw in Al Campbell, Caderyn Neville or Tom King. They will lose nothing, and concede three less penalties a game.

6. Still on the Rebels, I thought their backline looked pretty good on Friday night. Far from brilliant, but it was their first hit-out for the season. JOC was solid in midfield, and Mitch Inman looked good in his first Super game in almost a year. Get KB in there and that backline will score some tries. Now if only they could tackle a bit better…

Rare archival footage of an uninjured Palu, believed to be from 2006

5. Once again the Tahs provide a clinical performance against the Rebels. They never get the heart racing, but provided their forwards stay fit I expect them to be there at finals time. Dave Dennis and Kane Douglas both put forward good hard efforts, as did Sekope Kepu. But it was all about big Cliffy Palu, who is in some cracking form at the moment. If he stays fit look out, although after playing two straight weeks he is surely due an injury soon.

4. One of the big questions I have watching the Aussie conference so far is where are our young stars? Where are the game-breakers we have unearthed over the off-season? The Saffers have given us Johan Goosen, Juandre Kruger, Eben Etzebeth, Siya Kolisi and more. The Kiwis have thrown up Tyler Bleyendaal, Michael Hobbes, Aaron Smith, Nick Croswell. All very green, all very good. But the Aussies? Bernard Foley has had his moments, as has Liam Gill. But so far our conference is lagging in this department.

3. Who is going to win this year’s comp? You’d be crazy to make a prediction at this point. The Bokke conference looks super tight, with each of the Sharks, Stormers and Bulls looking solid. The Kiwi conference is looking crash hot, but which team will emerge on top? I love the Highlanders, but I’m not sure they have the depth. The Blues are great on paper but unreliable, same for the Chiefs. The Canes are rebuilding and won’t come close. That leaves us with the Crusaders, who had their moments on Saturday but were out-enthused by the Clan. The Aussie conference is clearly a race in two, but are either good enough? No idea. It’s shaping up as a great comp.

2. Which brings me to the talking point of the last few rounds, the strength of the conferences. John Plumtree had a whinge about the Saffer derbies being ‘more intense’ than the other inter-conference derbies. What a load of absolute bullshit. This notion that the Saffers somehow play harder than the rest of the comp is merely a stereotype that has no grounding in fact. In truth some Saffer games are tight and physical (eg Stormers/Sharks on Saturday), while others are free and open (like Cheetahs/Bulls that same day). The same goes for every conference. In terms of overall quality though it appears the Kiwis are shitting all over everyone else. They have produced some great games, often in trying conditions. As we get into the intra-conference games I expect this strength to be shown, starting with the Tahs/Highlanders this weekend. 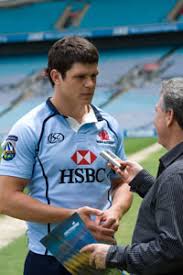 TC thinks he's been grilled before, but he ain't seen nothing...


1. But I have to give the top spot to Tom Carter. I lost a bit of respect for him after his antics against the Reds, but to be honest he has won me back after a big display against the Rebels. But more than that, I was impressed by the way he handled himself last week. Why? He didn’t say a word. He copped some flak in the press and the temptation would have been to hit back, or at least defend your actions. Not TC. He keeps his head down and comes out firing on Friday night, smoking JOC and scoring under the sticks. Game, set, match Carter. Then he scores another meat pie for good measure. What a way to respond to your critics.

But the best part? Carter is coming on the Green and Gold Rugby Podcast this week! Expect some fireworks as our boys put him over the hot coals about the last two weeks. It will be unmissable listening, so make sure you catch it on Tuesday.

What were your weekend observations??