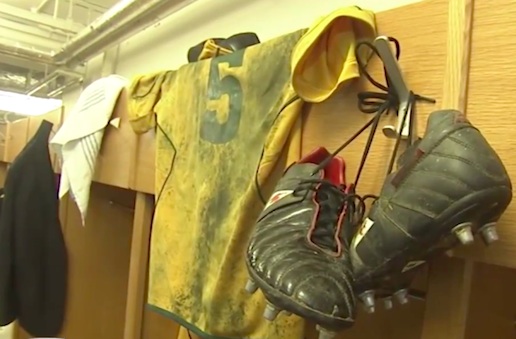 For those wondering WTF this is all about, I’m periodically giving my observations on the various attributes of the folk one may meet on the a-typical rugby park. We’re on a roll after Props and Hooker and I’m currently waiting for a stocktake variance report to run so I’ll take a time-out from the invigorating ne’er-a-dull-moment world of inventory management and tackle another position.

Locks wear No’s 4&5. They play in the second row, behind the front row and surrounded by the back row. That is why they are called Locks.

Locks are the true dreamers of all rugby players. They typically see themselves as possessing Brad Pitt looks with either a John Eales or Eben Etzebeth style of oversized humanoid perfection. That’s nice. The truth generally is they are usually as physically dynamic as a stoned giraffe and as coordinated as a Uzbeki sports-car marketing plan. And whilst 6ft 10in and 120kg is barely sufficient at Test level, at your local club anything over 5ft 10 and 85kg will generally do.

A Locks job is actually simple: shove in scrums and jump in lineouts. However adherence to these simple tasks is patchy at best as they often see themselves as misunderstood 12’s or 8’s but with ball skills of goldfish. Therefore their involvements are carefully stage-managed and their usual exposure to the ball is deliberately limited to either watching it fly past their feet in scrums or over their heads in lineouts.

That said, the modern Lock is expected to be quite active around the ground. Given they can’t make 1st ruck because they are still in-scrum or lineout, there has been a growing expectation in recent years they should make 2nd ruck generally along with the Props. But given that waiting for Props to make any ruck is akin to waiting for the 2nd coming of Christ, then a Lock arriving at any breakdown in either half is generally regarded as a good result.

One noble element of Lock play is the likelihood of split and cauliflowered ears from excessive time spent scrumming and mauling. Whilst such scars should be worn with pride, Locks often don copious amounts of strapping tape around their head in a vain effort to avoid such inevitabilities whilst simultaneously waxing their ears (it’s a Brad Pitt thing) as they remove said tape post match. But at least their need is authentic. Other forwards who tape up their noggins pre-game are pretending. Backs who tape their heads are just Fairies wishing they weren’t.

All that said, having a grizzled old 6ft 5in and 20stone Lock in your team is a comforting gift from the Rugby Gods. Sure he has less skill than a drunken Panda and trying to lift him in a lineout or kickoff has all the probability of a successful North Korean missile launch, but just having Chewbacca in your team is cuddly-fun and handy come Boat Race time.

Typical conversations with Locks tend to be a bit cat & mouse. Because they spend so much time either face-down in scrums or face-up in lineouts they have a lot of time for inward reflection and so they spend inordinate amounts of time trying to glean from spectators who actually saw more of the play what actually happened in the game all-the-while trying to sound like they already know. So when in conversation be prepared for cunning disguised as philosophy.