What the Rebels Can Bring to the Wallabies 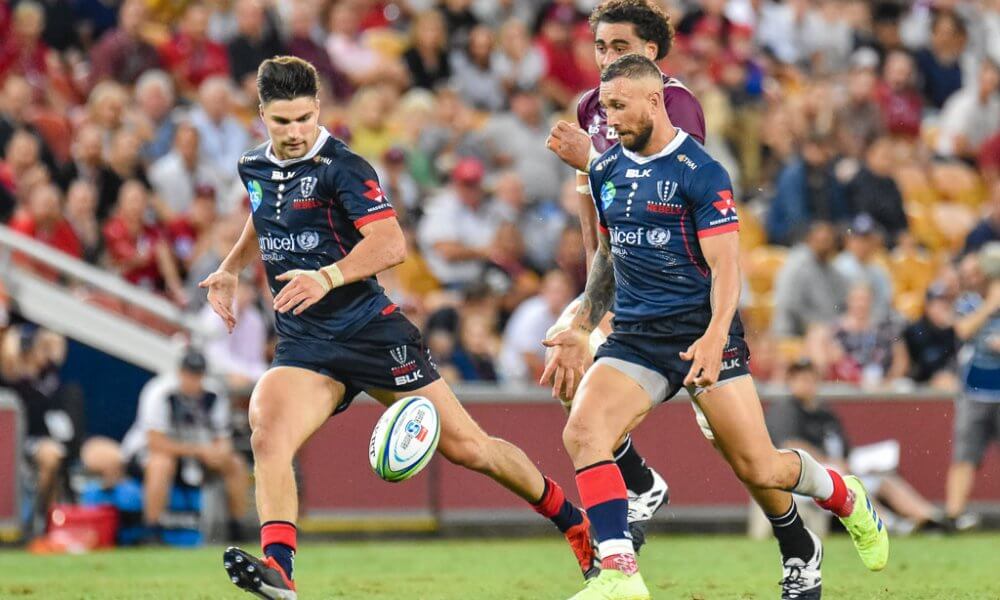 What the Rebels Can Bring to the Wallabies

Christian Lealiifano attended the most recent Wallabies training camp, making him the third specialist flyhalf there after Bernard Foley and Quade Cooper, and the sixth who can play at 10 after Reece Hodge, Matt Toomua, and Kurtley Beale. One factor that makes it difficult to choose between these options for the Wallabies’ flyhalf position is the fact that the Super Rugby franchises are not playing a uniform style of rugby.

Trying to get players from 2-4 different states and territories to come together and play the same game has long been an issue in Australian rugby, but the flyhalf’s role in creating and recognising attacking opportunities makes this even more integral. The Waratahs are currently playing a sideline to sideline type of game which necessitates strong passers and multiple playmakers, while the Brumbies rely heavily on the kicking talents of their halves and damaging one-out runners. The Rebels have taken advantage of having an all-Wallaby backline – except Billy Meakes, who still could be in contention – by having multiple players running attacking lines on every phase. This creates chaos in the defence and the Rebels simply have to trust Cooper to pick the right option.

There is even an argument for simply transplanting the Rebels backline directly into the Wallabies, with Meakes probably being replaced by the in-form Samu Kerevi at inside centre. One of the reasons why this is so appealing is because the Rebels players know to stay active and prepared around Cooper because anything could happen. The Wallabies have relied so heavily on Foley at 10 since Michael Cheika took over as coach that simply swapping Cooper for Foley in a traditional Wallabies backline has the potential to create a lot of issues.

There is evidence of this in the Rebels romp of the Sunwolves on the weekend. 7 of their 8 tries came from the backs, with the 8th being a post-80 minute rolling maul try. Cooper is primarily responsible for 5 of these tries and Jack Maddocks almost single-handedly created the other 2.

The first try occurred in the 12th minute off the back of a Rebels lineout, following which the forwards hit the ball up a few times on the blind side to draw in the Sunwolves defenders. Cooper then sets up the vaunted double-touch, passing to and receiving from Matt Philip (below) and then drawing the tackler before putting Angus Cottrell (in jersey 7) away unopposed. 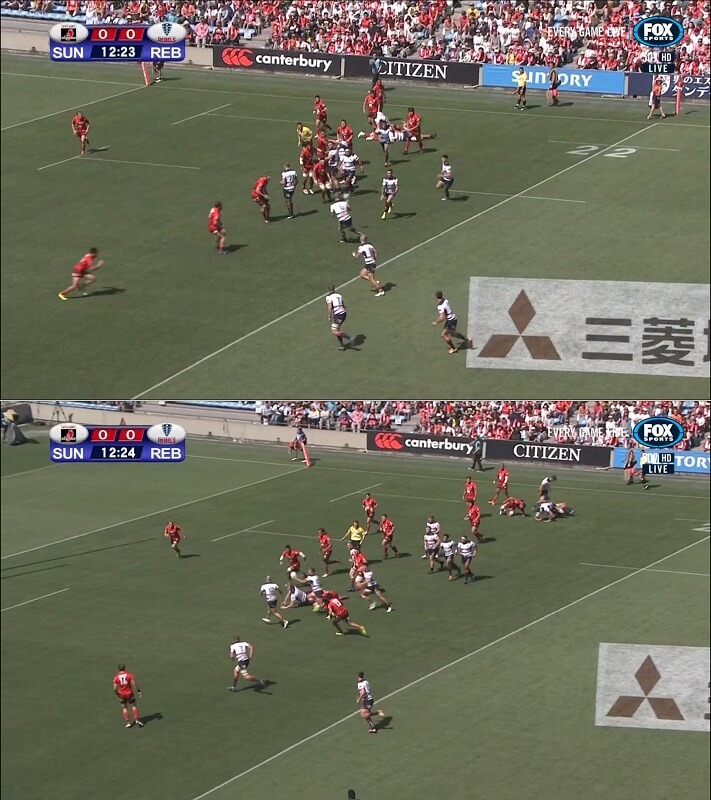 Meakes overruns the support line after Cottrell’s offload is delayed but he manages to do some good work off the ball, running a not quite obstructive angle that prevents the cover tackler from getting a good hit on Cooper (pictured below). 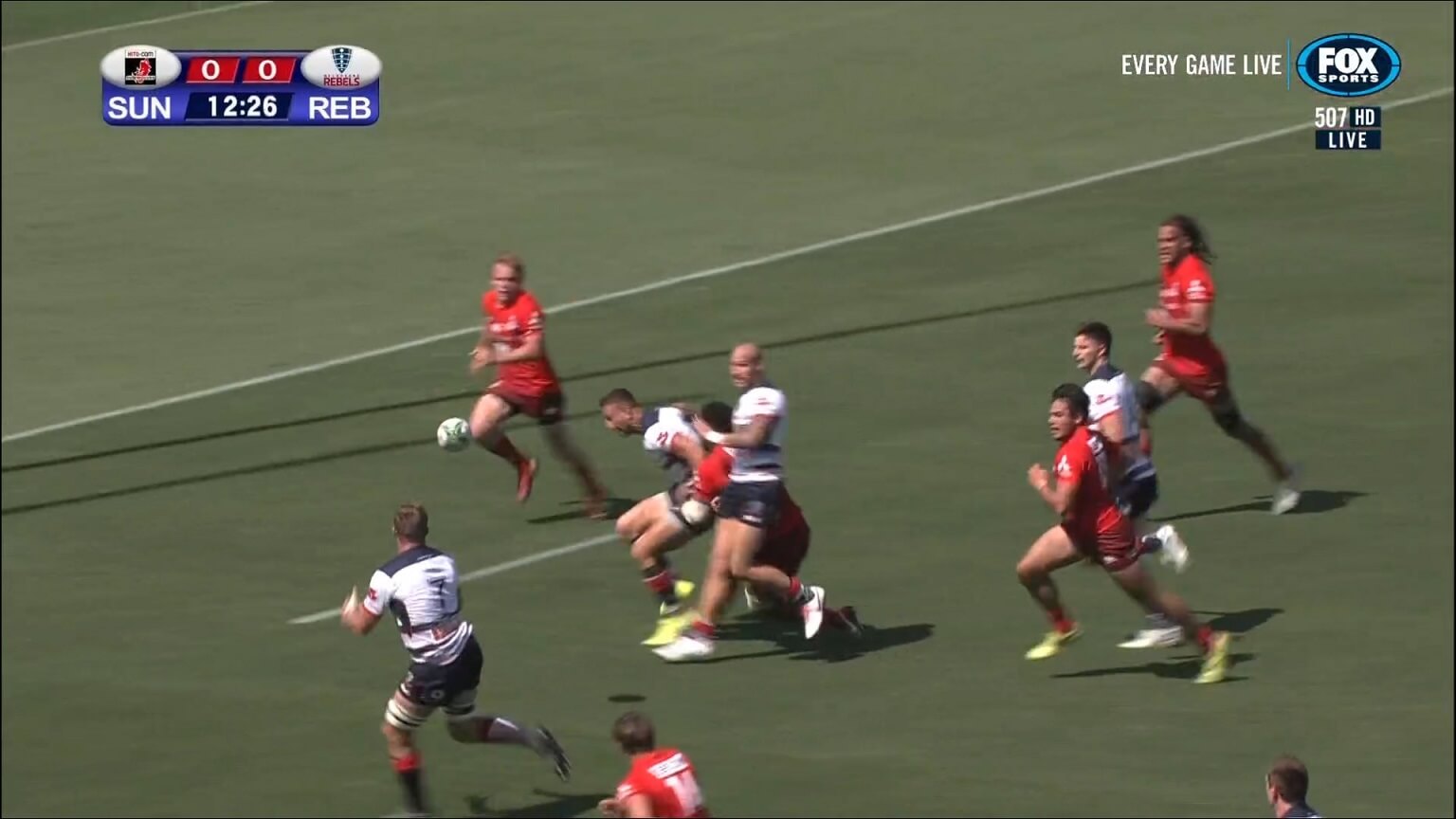 This is a fantastic try. Cooper does create it, but the lead-up work in the rucks and off the ball ensures that he has the foundation to do so. The Rebels continue to suck in Sunwolves defenders and negate their line speed with blind side plays and driving mauls for the rest of the game.

The Rebels’ next try occurs 3 minutes later off the back of a lineout and short subsequent maul. The Rebels utilise Genia’s well-rounded skillset by having him fit in as the first link in the backline rather than simply feeding the ball, and this creates an extra player in the backline much like Cooper’s double-touch did in the previous try. Meakes and Maddocks also run inside lines, and with Cooper at the helm these present a genuine threat that sucks in the Sunwolves’ midfield defence.

Cooper receives the ball with three genuine options outside him (circled below) and selects the one running the best angle (Hodge). He crashes straight through the defensive line and gifts Koroibete a try in the corner. 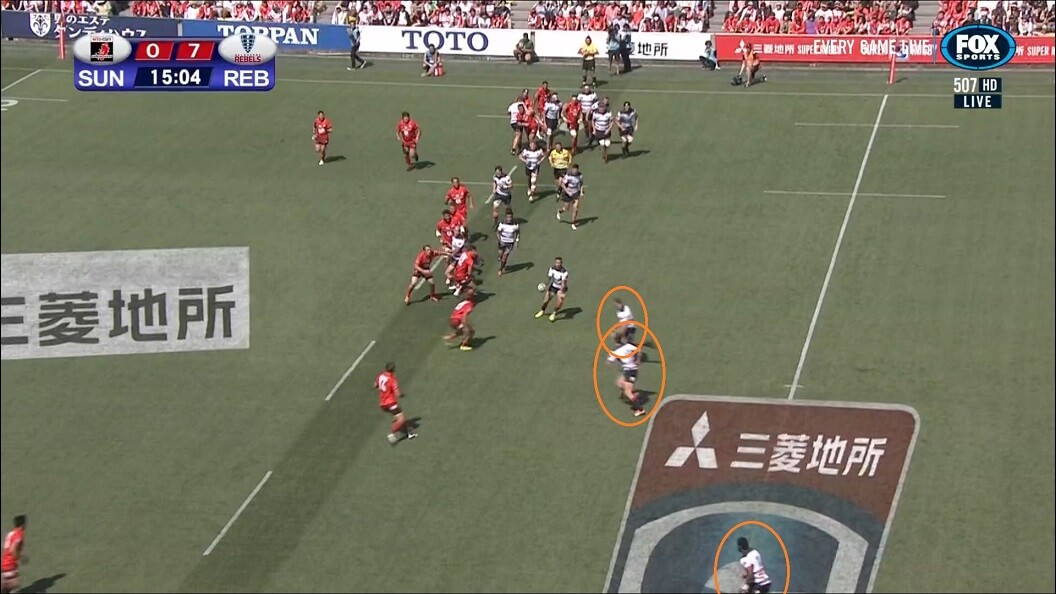 The ability to recognise all 4-5 runners and their lines on both sides of him and then pick out the best option is what makes Cooper so invaluable at flyhalf, but credit must also be given to the rest of the Rebels backline for presenting genuine options.

The next try occurs in the 27th minute while the Rebels have a man in the sin bin. As with the previous try, the Rebels lineout briefly becomes a maul before the man at the back feeds Genia who puts Hodge into a gap. Genia’s use as a playmaker is not only one of his talents but also a strength of the Rebels, having been heavily relied upon during the time before Cooper joined the team.

Genia creates a similar effect to a flyhalf double-touch by arriving at the ruck almost as soon as Hodge hits the ground and quickly getting the ball away to Cooper. Meakes’ willingness to get over the top of his midfield partner to protect the ball makes this possible (seen below). As soon as Cooper receives the ball, he spots the opportunity out wide and floats an approximately 25-metre pass to Koroibete who gets his second try of the match. 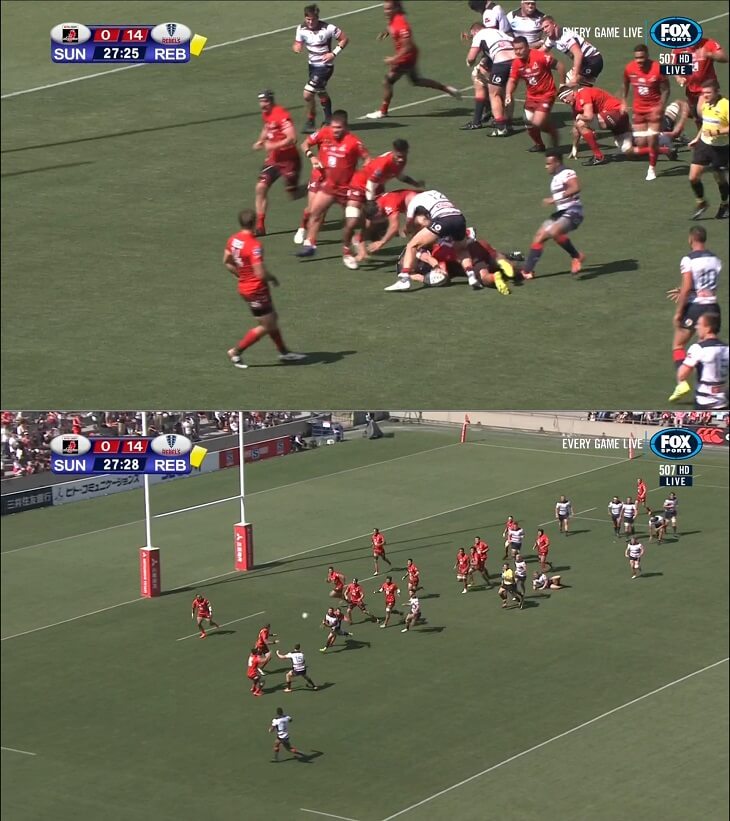 Koroibete is about 25-metres from the sideline when the pass is made but he catches it only a few metres out – it is Cooper’s ability to make the pass hang in the air and soar over the heads of the intervening defenders that makes this try possible. Koroibete also shows faith in Cooper’s ability to throw such a pass by staying in position on the wing. Dane Haylett-Petty contributes simply by being a big, hard runner in proximity to Cooper and drawing defenders as a result.

In the 52nd minute, Maddocks scores a solo try after the Sunwolves’ attack collapses in the face of Reece Hodge’s defensive pressure. He scores a second try in the 77th minute by simply receiving the ball from Michael Ruru while running a good angle and utilising the referee’s position to his advantage (below), and it is this ability to provide a threatening attacking option which makes him such a good match for intelligent and opportunistic players like Ruru, Genia, and Cooper. The fact that he sets this up off the back of a phase in which the Rebels lost a good 10-15m is even more impressive. 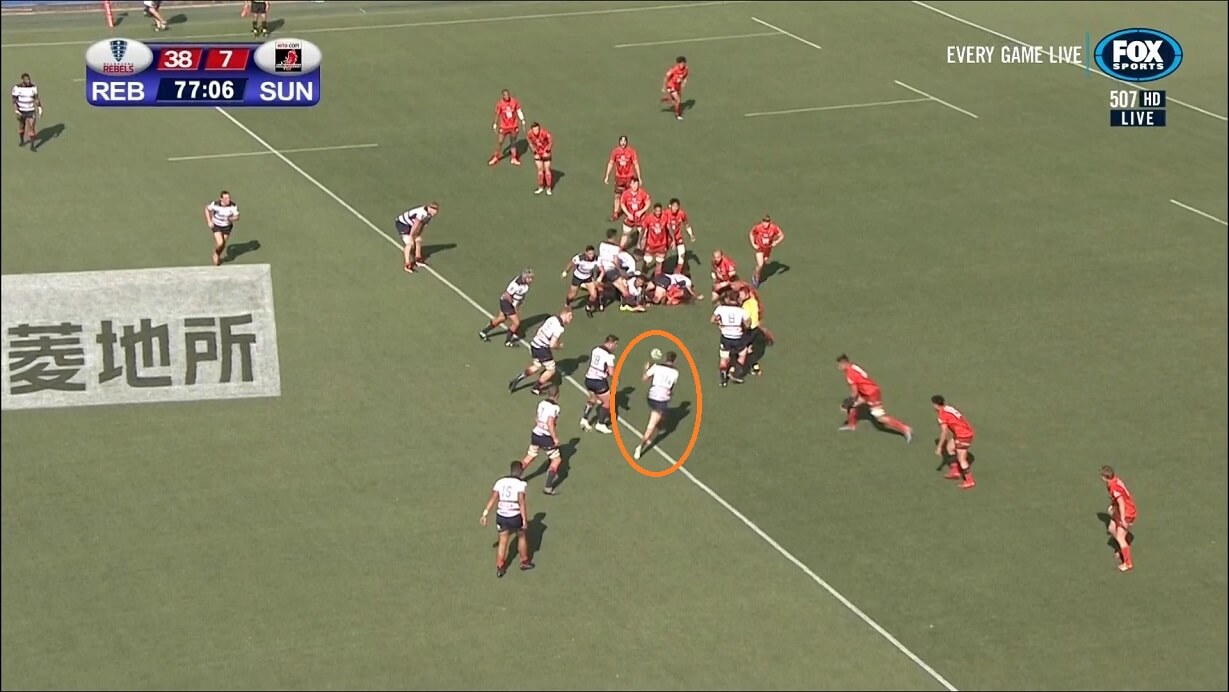 Cooper repeats the pass from his previous try set-up in the 57th minute, receiving the ball off the back of a lineout and immediately throwing a flat pass 20 metres to Koroibete (pictured below). 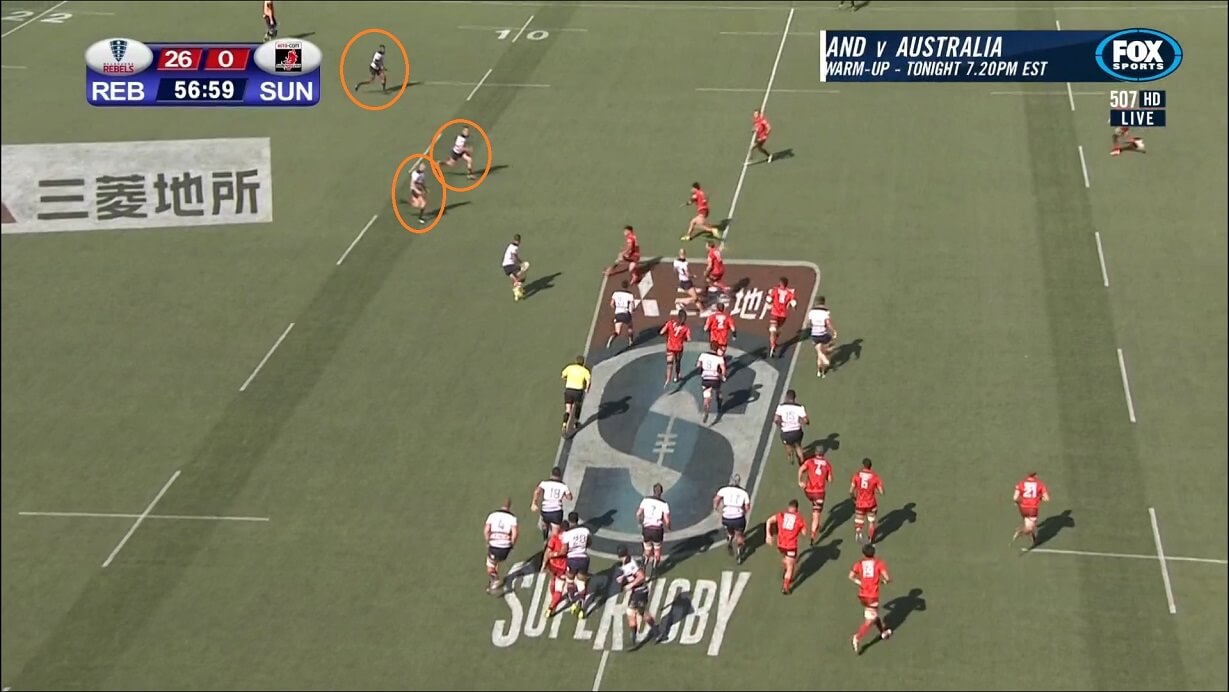 Again, Cooper has three outside options and picks the best one. Koroibete is about 15 metres from the sideline which creates a genuine risk of him getting on the outside of the defender. The flatness of the pass puts Koroibete on the front foot, and these factors enable him to use a powerful left-foot step to create a try 50 metres down the field for Haylett-Petty.

Between Koroibete’s speed, stepping ability, and raw power, there are few wingers who could reliably bring him down in such a massive amount of open space and with a charge-up. Coach Dave Wessels is aware of this and sets up this try by clumping the other 14 Rebels in about 55-60% of the field’s width. The defending team is faced with an impossible choice: to spread their line wider to cover the long pass and cross-field kick (which both Cooper and Meakes are capable of, making for an even more deceptive option) but risk leaving holes in the centre of the pitch that can be exposed by Cooper’s trademark short inside ball, or to match up mano-a-mano and pray that Koroibete stumbles while rolling over the opposing speed bump. The Sunwolves choose the latter, but even if the tackle had been made a good number of metres would have been gained from the lineout on halfway and Meakes’ previously demonstrated willingness to defend a ruck makes it likely that possession will be retained.

Critics will point out that Cooper’s flailing arm tackle technique is not particularly sound, but this myth has long since been debunked. Cooper’s tackle success rate is within 1% of Foley’s and is higher than Beale’s, and these two players have been the staple Wallaby playmakers since before Cheika took over as coach. The Rebels also have issues with defence, discipline, and the relative lack of power and top-level experience in their forward pack. The evidence of this is clear: they have received 8 yellow cards (2nd in Super Rugby after the Sunwolves), have an 82.8% tackle success rate (3rd last in Super Rugby, ahead of the Highlanders and the Sunwolves), and have only one current Wallaby among their forwards (Adam Coleman with 29 caps). But there is certainly a lot the Wallabies can learn from the Rebels.

While the idea of bringing Dan McKellar on board to recreate the Brumbies success with the driving maul at the international level is often discussed, Wessels should also be considered for a position relating to set piece attack. The Rebels have scored 53 tries this season, the 2nd highest in the tournament (after the Crusaders on 59 and with a bye to come), and most of these off the back of their lineout which is also the 2nd best in the competition with a win rate of 91.8% (after the Bulls on 93.5%). The fact is that it is the Wallabies’ attack which struggled in 2018 compared to previous years and this has an obvious fix – the fact is that with only a 1 game difference between them, Cooper has 26 try assists compared to Foley’s 9.