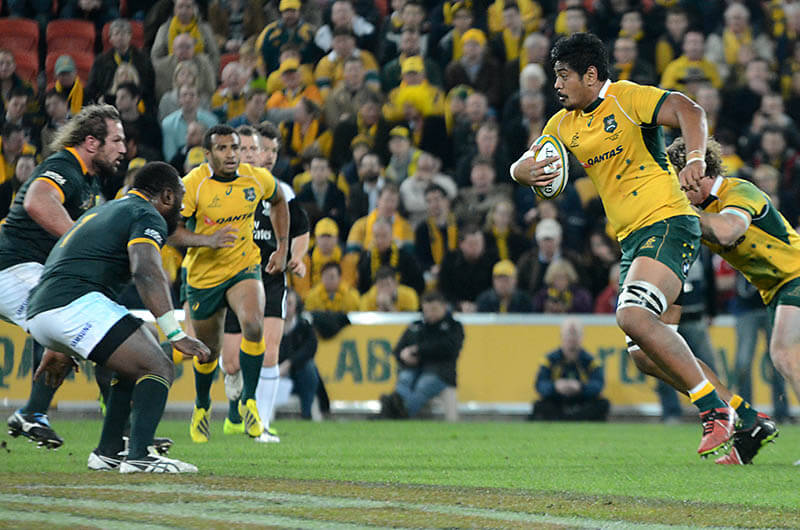 France-based stars Will Skelton, Rory Arnold and Tolu Latu have previously been confirmed in the Wallabies Spring Tour squad.

Now Channel 9 have written a piece on the redemption arc of Will Skelton. In 18 Test matches for Australia between 2014 and 2016 Skelton was 2.07m and 148kg and one of the biggest bodies in professional rugby. However, the giant lock copped criticism for his fitness and work ethic.

Skelton moved to Saracens in London in 2017.

“He came in initially for a bit of injury cover,” says Kevin Sorrell, a veteran of 195 games for Saracens and now the club’s attack coach.

Mark McCall (head coach) and Phil Morrow (performance director) sat with him and said, ‘look we feel like you’ve always been playing with one hand tied behind your back because of your conditioning and your body composition so if we can get that bit right we think you can fly. This is what you’ve done so far, you’ve had a good career and you’re always going to be competitive but imagine, if you were to work hard, get your body right, what you could do.’

“That excited him and he grabbed hold of it. It was a really pivotal moment.”

“He paid for his own nutritionist and got his body composition right, focused on his conditioning and all of a sudden he was able to do things that he wasn’t previously able to do. A lot of credit has to go to him for his attitude towards it and what he brought.“

“Because of his natural size he’s going to win collisions anyway, so certainly from an attack sense I was talking to him about how to maximise that. So it’s not just winning the collision, it’s the work he does post that. In the tackle and post the tackle. Can he provide a team with quick ball,” Sorrell says.

“He’s got a genuine point of difference, and some of the stuff he does you can’t defend it. Two people have to come to him to try to stop him so he attracts defenders. It creates space for everyone else and that’s what makes him so destructive. He’s unique.”

Skelton moved from Saracens to La Rochelle last year where he now plays at around 125kg, presumably still at the same height.

“On the pitch obviously he’s got something unique that not a lot of people can handle and when it’s used right it’s very effective. So instead of using him as a 20 or 30 minute impact player he can influence a game for long periods. It’s huge,” Sorrell says.

“And now you look at what he’s doing in France. He’s ripping up.”

The Sydney Morning Herald reports that World Rugby is considering opening “targeted dialogue” with Australia over the 2027 World Cup.

“Targeted dialogue”, is what the International Olympic Committee conferred on the south-east Queensland bid for the 2032 Games in the lead-up to the vote in July to award the Olympics to Australia’s best city. It is as close to a “sure thing” as any candidate can get. If the potential host country does not shoot itself in the foot, the prize is virtually theirs for the taking.

There are only two candidates in the running for the event, Australia and the United States, with the Americans struggling, talking funny and failing to embrace the metric system. Their national side, the Eagles, still has not qualified for the next World Cup, in France in 2023. They lost out to Uruguay as America’s first qualifier for the tournament. Now they must beat Chile – who on Saturday sensationally knocked Canada out of the World Cup for the first time ever – to scrape into the tournament.

World Rugby is due to vote in May 2022 but it is acutely aware that one year of planning has already been lost because of the pandemic. Seemingly, it is prepared to do whatever is necessary, even speeding up its own process, to make up time.

“Phil Kearns (the bid CEO) and (director) Anthony French have done a great job getting us to this point, but we can’t be complacent,” said Rugby Australia chairman Hamish McLennan.

In pursuing the 2027 World Cup hosting rights, Australia has formed a Distinguished Persons committee to allow such luminaries as John Howard, John Coates, Ron Eddington, Peter Cosgrove and John Eales to lend their expertise. As vice-president of the IOC, John Coates was the man entrusted by Olympic supremo Thomas Bach to radically reform the host city selection procedure and was the architect of “targeted dialogue”.

Lack of certainty over Cooper turns to indecision.

Pravda and the other communist paper report that Quade Cooper is set to line up for the Japan Test on Saturday but may miss the remaining three Tests against Scotland, England and Wales.

Discussions are continuing between the Wallabies and Cooper’s Japanese club Kintetsu Liners. The 33-year-old said a decision on his playing status was “above my pay grade” and he would support his club after it allowed him to join the Wallabies squad during the Rugby Championship. Cooper has played two seasons with the Liners, helping them back into Japan’s Top League competition for 2022.

Cooper said that he expected Japan to pose a threat to the Wallabies under the dome in Oita, which suited the Brave Blossoms’ fast, attacking style.

“Two of their guys play in my (Kintetsu) team – Siosaia Fifita and Semisi Masirewa – and they are both phenomenal athletes,” he said.

“When you’re watching Japanese Top 14, the games are lightning quick, they’re free-flowing, they run the ball from everywhere.”

“The collisions are not as high, but when you look throughout the ranks of all the teams there are some very big and physical players so that they can match it with anyone in terms of physicality.”

“I think it’s their brand of football that they bring, they’re exciting to watch and tough to play against … it’s going to be a very tough ask coming up against them.”

ESPN reports that senior All Blacks Codie Taylor and Sam Whitelock have shared their sadness at the passing of former Crusaders teammate Sean Wainui, revealing the entire New Zealand squad is hurting as they prepare for Sunday’s Test against the United States.

Wainui died in a car crash on Monday morning, leaving behind his wife, Paige, and two young children.

The Chiefs winger’s death has left a huge hole in the heart of the New Zealand Rugby community, with Wainui’s universal popularity reflected in the outpouring of emotion on social media since the news of his passing.

It has hit the Chiefs players currently on tour with the All Blacks particularly hard, with skipper Brad Weber and star centre Anton Lienert-Brown among those to express their grief on Monday.

While the All Blacks are yet to determine how they will mark Wainui’s passing, the team is expected to honour him prior to kick-off against the Eagles on Sunday morning.

Before conducting their haka against the Pumas last year, the All Blacks placed a jersey on halfway as a tribute to late Argentina football great Diego Maradona, while the Maori All Blacks made a similar show of respect for Ireland’s Sean Foley ahead of the team’s clash with Munster in 2016.