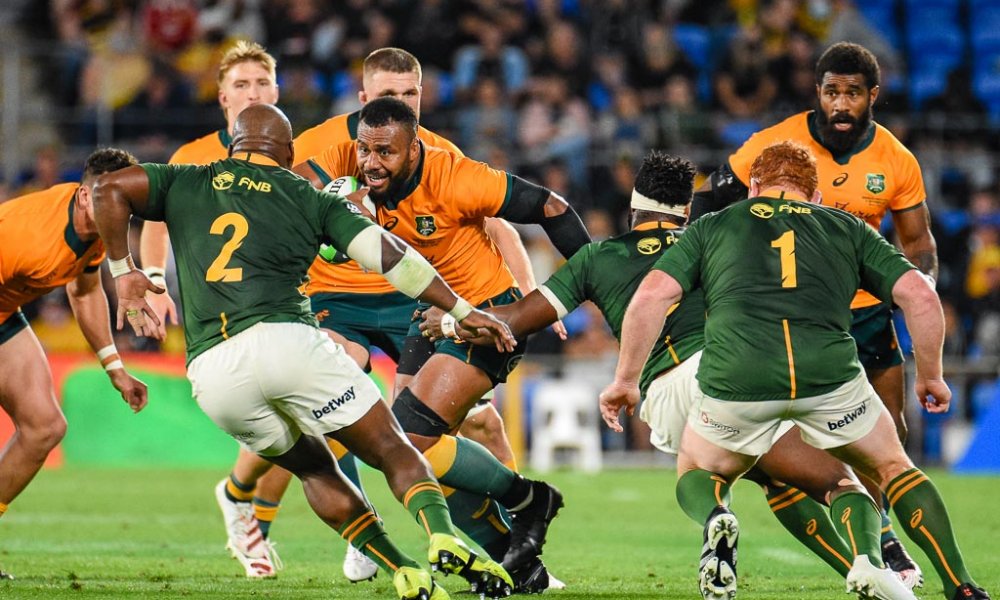 Today’s rugby news sees Kerevi out with an ACL (dammit!), the Brumbies confirm their 2023 coaching setup, Wallaroos confirm squad for O’Reilly Cup and All Blacks players being a bit rubbish apparently.

Kerevi out with ACL from Commonwealth Games game

Fox reports that Samu Kerevi is expected to miss the rest of the year due to a knee injury.

It’s understood Kerevi, 28, suffered an ACL injury during Australia’s narrow 7-5 victory over Kenya in their Commonwealth Games pool match over the weekend. Kerevi took no further part in Australia’s campaign, where John Manenti’s side lost in the semi-finals to South Africa. The Suntory centre is expected to miss the remainder of the year, with sources confirming the 41-Test centre is expected to spend at least six months on the sidelines. Kerevi is said to be devastated, believing he has let his teammates down.

The Wallabies were happy for Kerevi to take part of Australia’s sevens campaign after the former Queensland Reds captain made a promise to his teammates from the Tokyo Olympics that he would try and help them win gold in Birmingham. After featuring in the No.12 jersey in all three Tests against the Soap Dodgers in July, Kerevi was always set to miss the opening two matches of The Rugby Championship against Michael Cheika’s FISMs because of his Commonwealth Games commitments. The world class centre was to link back with the squad ahead of the home Tests against the Dutch Dirt Farmers later this month, but that won’t be the case now.

Kerevi’s long-term injury will put extra pressure on Hunter Paisami to perform, with the Reds centre likely to wear the No.12 jersey against Los Pumas in Mendoza on Sunday 7 August 5:10am (AEST – and not on free-to-air from what I can tell, despite home shopping taking up a few Nine channels at that time).

Quade Cooper, meanwhile, is firming for a recall to the starting side, having missed the 2-1 series loss to the Poms after suffering a calf injury during warm-up ahead of the opening Test. Kerevi’s absence will allow Rennie to see how Cooper operates without his battering ram on the outside. While Cooper won all five matches he featured in last year for the Wallabies, he benefitted from having Kerevi in the midfield who acted as the great foil on his outside.

Now without the muscle of Kerevi to steady the ship if necessary Cheika’s Pumas will undoubtedly target Cooper and try and take away his space. Evita are coming off a thrilling 2-1 series victory against the Jockos, in what was Cheika’s first Tests as coach after taking over from Mario Ledesma earlier in the year.

Widely acknowledged as one of the best technical coaches in the world (if the Brumbies do say so themselves), 2023 will be Fisher’s sixth season in his third stint at the Brumbies, Fisher having previously worked with Larkham in the former flyhalf’s playing days and in his early years as a coach.

Rod Seib will continue for his third season at the Brumbies having joined the club at the end of 2020. A long-time head coach in Brisbane’s Hospital Cup, Seib served as Queensland’s Academy head coach before saying goodbye to sunny weather and night life to move to Canberra. Seib has added to his strong reputation since taking charge of the Brumbies attack, serving as an assistant coach for Australia A during the recent Pacific Nations Cup.

Brumby 132 Dan Palmer will step into a full-time role in the club’s coaching group in 2023 having had several successful stints in charge of the Brumbies scrum, the former Wallaby having also previously worked with Larkham as both a player and a coach.

Between lobster, brandy and cigars at Rugby Australia, Nathan Williamson has found time to report that Wallaroos coach Jay Tregonning has confirmed a 32 player squad for the O’Reilly Cup, headlined by the inclusion of exciting duo Maya Stewart and Bienne Terita. The pair are among six uncapped players named for the two-Test series, set to kick off August 20 in Christchurch before heading somewhere somehow worse (Adelaide) as part of a double-header with Wallabies-South Africa on August 27. Stewart makes a long-awaited return in a training capacity as she continues her recovery from an ACL injury suffered during pre-season training with the Waratahs.

Meanwhile, Terita makes the move from Sevens to the 15-a-side game after debuting for Australia in Malaga during the 2021-22 World Series. “We’ve learnt a lot from our last tour to New Zealand for the PAC 4 Series and we feel we’ve adjusted this squad accordingly to help us find success in the O’Reilly Cup,” Tregonning said in a statement. “Key players have returned to the side from injury, and we are making steps forward to ensure we have the strongest squad available ahead of the Rugby World Cup in October. We are excited to see what Bienne (Terita) can bring to the side, she has been extremely impressive for the Aussie 7s and her speed and ability is a key addition to our already strong set of outside backs.“

Reds outside back Melanie Wilks and Brumbies hooker Tania Nadan will be out to make their debuts after their selection in previous Wallaroos squads in 2022. Waratahs veteran Emily Robinson makes her way back into the Wallaroos set-up, joining potential debutant Bree-Anna Cheatham, Liz Patu, Madison Schuck, Eva Karpani and Bridie O’Gorman in the front-row.

Robinson is joined by club team-mate Atasi Lafai, who returns to the side from injury to bolster the second-row.

All Blacks players responsible for performance

When is it going to be the fault of the All Blacks players for their results?

Sure, it’s been fun to see how badly New Zealand Rugby (NZR) have mismanaged their business. And, yes, it’s been amusing to see critics from all corners of the game come out to give the coaching of Ian Foster a kicking. But what about the actual blokes in black? The ones who continue to let the jersey down. When’s their day of reckoning?

It’s easy to let off-the-park issues obscure what’s happening on it. Winning masks a lot of problems, but when results go bad it’s amazing how much disharmony becomes apparent. For all that’s wrong within the running of NZR and the All Blacks, the fact remains that the team aren’t very good. These blokes, with their flash haircuts and sabbaticals and tattoos and massive wages, simply haven’t delivered. Not this year, not last year and not the two seasons before that either. Not when it counts, at least.

No, they’ve been found physically and tactically wanting. They’ve lost lineouts, missed tackles, dropped passes and kicked away good ball too often to be regarded as an elite team. If they spent as much time on skill execution or studying the opposition, as they do writing messages on their wrist bands or practising fancy handshakes and try celebrations, maybe they’d win a game now and then.

There are sacrifices made in every part of New Zealand rugby to ensure that the All Blacks can be successful. Every team in every town in this fine country makes do with less, so the All Blacks can have more. People are happy to do that as long as the team keeps winning. Well, the winning’s stopped and the only people who appear not to be suffering any consequences are the players. When is it actually going to be their fault?