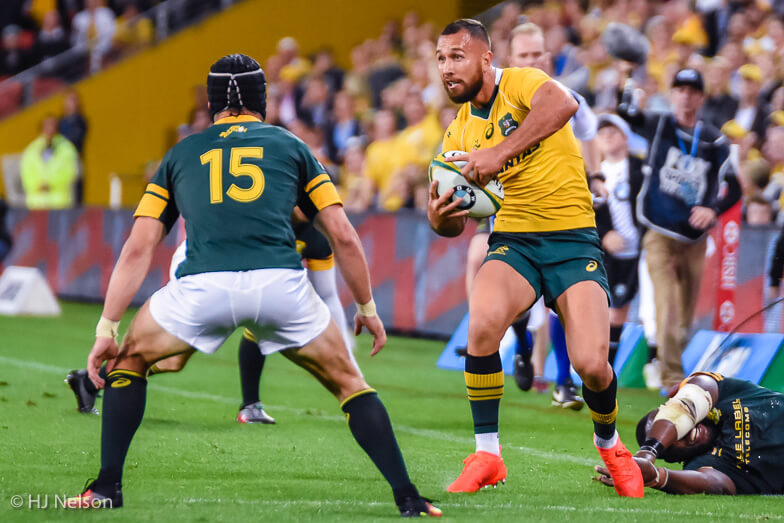 Qantas Wallabies coach Michael Cheika has made four changes to his starting side – including benching Quade Cooper –  for the final Bledisloe Cup clash against New Zealand at Eden Park.

Nick Phipps will wear the number 9 jersey in the absence of Will Genia and joins Bernard Foley in the halves – Quade moves to the bench.

Foley’s shift to flyhalf sees Reece Hodge claim the number 12 jersey, with the Melbourne Rebels star moving to his preferred position for the first time in the Gold jersey.

It’s a return to the Test arena for Brumbies winger Henry Speight who hasn’t featured for the Wallabies in over a year, after his stint in the Qantas Australian Men’s Sevens squad.

Speight scored a try in his last start for the Wallabies, dotting down in the 65-3 rout of Uruguay at the 2015 Rugby World Cup.

In stark contrast, Cheika has named an unchanged forward pack for the first time in 2016 with Lopeti Timani holding onto the number 8 jersey after David Pocock proved his fitness late on.

Pocock will come off the bench at Eden Park in what will be his first Test since breaking his hand in the 36-20 win over Argentina on September 17.

The final Bledisloe Cup clash will be a special occasion for captain Stephen Moore, who will become the fourth most-capped Wallaby in history, overtaking George Smith when he runs out for his 112th Test.

It will be an historic night at Eden Park as the first-ever double-header, with the Buildcorp Wallaroos to face the Black Ferns at 3pm AEDT.

The Test between the Wallaroos and the Black Ferns will be screened LIVE in High Definition and ad-break free on FOX SPORTS 502 from 2.55pm AEDT.

The Test between the Qantas Wallabies and New Zealand will be screened LIVE in High Definition and ad-break free on FOX SPORTS 502 from 5.00pm AEDT and LIVE on Ten from 5.30pm AEDT for NSW, ACT and QLD viewers (on ONE in other Australian States and Territories). Fans can also LIVE stream the match on Foxtel GO (for Foxtel subscribers) and on TenPlay.