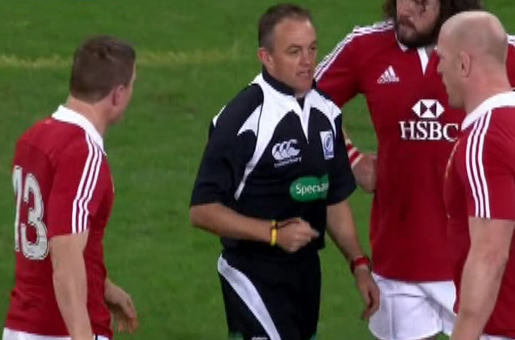 The first test between the Wallabies and Lions refereeing performance has produced plenty of debate.

Warren Gatland was obviously very frustrated with Chris Pollock. There have been suggestions that there are differences in interpretation between the Northern and Southern hemispheres and that this caused confusion for Lions players. In a subsequent interview Gatland has said

Some of our players found it difficult to understand it when they were penalised.

… a dreadful display, one of the worst in living memory … it was the worst refereed game in recent history, appalling … he was totally inconsistent and lack of penalty try and yellow cards criminal.

So, let’s look at some specific issues that have been raised to see if the refereeing performance was really that bad.

Were we crucified at the breakdown? Yes.

Mako Vunipola was penalised for coming in from the side when he was part of the tackle. That could have cost us the game … He did Brian O’Driscoll early in the game when he was on his feet.

I’ve added in other incidents I’ve seen complaints about to generate some discussion between Wallabies and Lions fans. The footage of each incident is contained in this short video.

Let’s look at those in a little more detail. The first three deal with the issue Vunipola was penalised for.

No doubt fans of both teams will have different opinions on many of these, even opinions at opposite ends of the scale.

We’d love your comments on these and any other incidents but please keep it civil – we’ll delete any inappropriate comments anyway so don’t waste time posting them.

Get Jonny: Are the Lions hiding a Sexton injury?
Thursday’s Rugby News