Here’s the Australia squad for the Euro tour. The big news is that Aussie Robbie Deans has continued to pump in fresh talent with four new caps – he even created an extra 34th spot for James O’Connor, although presumably he only needs a childs plane fare.

The other new caps go to flanker David Pocock, prop Sekope Kepu and the bunny-hopping Quade Cooper. For Cooper to be in I can only assume Beale is still borderline injured or partying his arse off, such was the gulf between these two players through the year.

Other new old faces include Mark Chisholm and Digby Iaone back in the Green and Gold. I would have liked to have seen us blood another full on lock in the shape of Kimlin, although Chisholm brings as many caps as Mumm, McMenimen and Kimlin would have between them, and also had a good year with the Brumbies as a lock.

As for Iaone – do we really need another Winger? I would have thought blooding another centre like Tyrone Smith or Tom Carter would make more sense. Thankfully Luke Burgess is fit to go as Sam Cordingly hitches a lift to France by somehow snagging a spot, and the reports of Antipodeans’ faith in Tim Tam Tahu appear to be correct. We still do not have a fullback though.

Roughly speaking the balance looks about right between new and old(ish), and it’s an important balance as it’s the Wallabies season is in the balance. A valiant finish to the tri-nations will look much more like a crappy loss should our arses get handed to us in Europe as has happened in recent years.

As for our dominance over scrums like the Kiwis….a certain cold wet November day at Twickenham will put that to the test 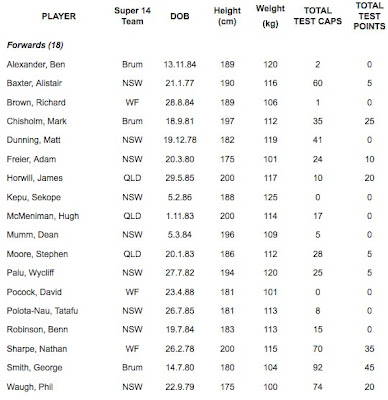 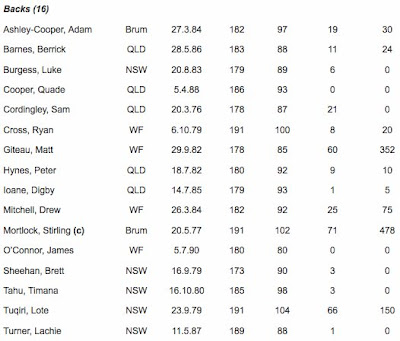