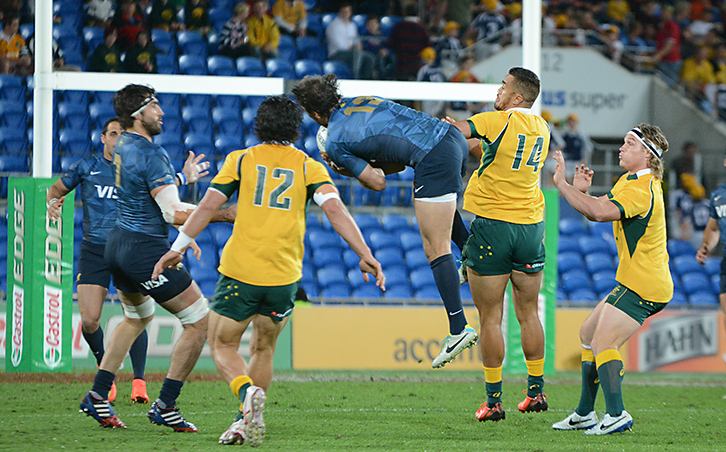 A win is a win, yet the result felt a little disappointing after blowing a comfortable lead in the wet for these Wallabies player ratings. 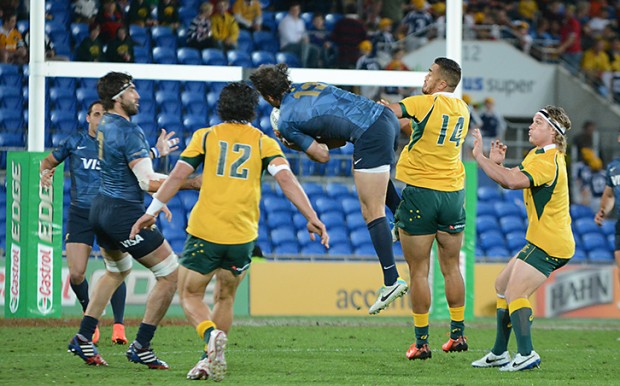 After the second watching, I am still wondering how the Wallabies gave up such a comfortable 29 – 13 lead in the wet.  Meanwhile, it seems that Link can’t get the usage of his bench right. Last game, Link arguably waited too late but had great impact from his bench.  This game Link went to the bench early, with Slipper being replaced at the 49th minute, yet he got the opposite impact from his bench this week with the Pumas dominating late in the game and almost grabbing a draw.

At least there still are a few consolations to draw from the result, besides the win.  The Wallabies left a few points on the park, the Wallabies are winning in the wet, the scrum has shown a marked improvement, and you have me giving here giving you my best shot at the rankings.  On the downside, I did watch the game twice.

I am breaking my ratings cherry with this effort, so please be kind. There’s a few scores that I was uhming and ahing over (sorry Brumbies players in particular, it just wasn’t your game after Toomua and Kuridrani were great the previous week – and yes Scott Fardy you are still one of my favourite players).

Part of the starting front row strong at the set piece. Came in under and injury and sickness cloud, and had a busy performance in his 49 minutes. Shaping into one of the Wallabies most consistent performers. 7

Part of the starting front row strong at the set piece. Didn’t have as much impact around the park as his props. Made a welcome return, but fell to the 2014 Australian hooker curse and barely lasted the first half before being replaced due to injury. 6

Stronger carries and more involvement this week, but still too upright and still needs to play a bit “heavier” for the amount of carrying he does. Replaced at 61 minutes. Maybe a little harsh with the score, but the positive is that I think it was a performance that again shows the potential to be a Test standard lock is definitely there. 5

Toiled well with a few nice touches around the field, and this time gave away no dumb penalties. Ran a decent lineout, stole a few opposition balls and had disrupted the Puma lineout by the end of the game. A loose pass and dropped ball the blemishes. His physicality seems to be improving, apart from his carries. 7

Lacking the impact that made him one of the best Wallabies last year. Form just seems to be short of where we all want it to be. Seems to be trying hard, but it’s just not happening for him. Subbed after 49 minutes. 5

Two tries, the usual strong runs. Put in his usual busy performance around the park, but will rue giving away the penalty that cost a try. Better captaincy this week from where I sat, just needs to get to the ball faster than Phipps after penalties! Just edges Foley to get the G&GR Man of the Match. 8

A strong game. Was busy: the most carries, and the most tackles. Strong in contact, and effective at moving people at the breakdown. Given a chance with Palu’s injury, and he grabbed it with both hands. Subbed after 69 minutes. 7

Good passing with the wet ball, out in front of the man. Got the ball out quickly. Nice break and pass for Betham’s try. Marked down for the two quick taps, the occasional poor pass and predilection to take the short side option when clearly outnumbered. Finished the game on the wing. 7

Best game in Wallabies colours. Two clean breaks, lovely pass for Hooper’s try. Had more balance in his running and passing than in previous games, and got more involved controlled the game well most of the time. Reliable goal kicking. Just needs to be able to find his support a little more, and to get more consistency with his tactical kicking to have that magical game. 8

Tried to get involved, but not much came his way. Looked OK in what he did apart from a ruck penalty, but needed more of it. Will rue the lost ball that led to the Puma’s last try. 5

Mixed game, no doubt will be disappointed with his effort. Strong over the ball, but also gave up too many turnovers. Part of a midfield well contained by the Pumas. Perhaps lucky he wasn’t scored lower. I expect him to bounce back strongly next game. 5

Part of a midfield well contained by the Pumas.  Strong in contact, but had little room to work. Would have loved to see more of him in space. 6

Touched the all a surprising amount of times for a winger in a wet game. Good finish to claim his first try for the Wallabies. Went off injured after 71 minutes. 6

Another back with a mixed game. A few strong carries, but marred with a few mistakes. Becoming too predictable with taking the outside break, altough still very hard to stop. Needs to find his support more. 5

Came on at half time. Struggled at scrum time. Looked slightly shakey at line out time. Tried hard, but struggled to make an impact. 4

Came on after 49 minutes. Struggled at scrum time. Provided a good physical impact around the park to somewhat offset his struggles at the set peice. 5

Came on after 58 minutes. Well beaten at scrum time. 4

Came on after 61 minutes. Missing the impact from the last week. 5

Came on after 49 minutes. Struggled to make an impact, unlike previous weeks. Dropped a difficult pass from Foley with a hint of a try on offer. 5

Came on after 69 minutes. Made an impact just a few minutes later to win a key penalty. Not enough time for much else as the last five minutes were spent with scrum resets. No rating

Came on after 71 minutes. Little chance to be seen. No rating

Came on after 52 minutes and nearly threw an intercept after a brief hesitation, then was only sighted making an odd tackle. 5