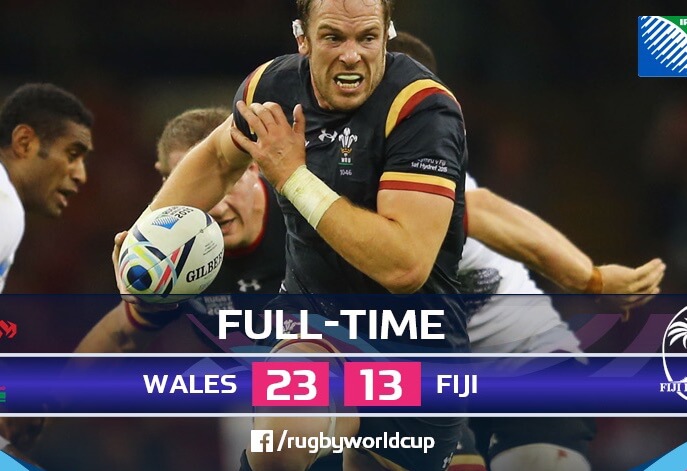 Wales did just enough to defeat Fiji 23-13 in their third Pool A match overnight. Reminders of losing 38-34 in Nantes in 2007 were all the talk in the lead-up, but a battered Welsh outfit scored two tries to one to register the big W.

Both of these teams traditionally like the open play. So it was no surprise to see plenty of that, though the match interspersed classy with scrappy.

Wales started all guns blazing with a great run from George North ending with a penalty on the line. The med in red knew that they needed a bonus point and went for the corner. They came up short, but Gareth Davies sniped around some flimsy post defence to score under the sticks soon afterwards.

The sides exchanged penalties before Davies again made a great run down the blind and looked set to score, only for play to be called back for a dangerous neck-roll in the ruck by lock Bradley Davies (no relation, supposedly). Neck contact was supposed to be a focus area for the World Cup referees, but here as in other matches, no card was forthcoming.

At 10-3, Wales scored another, with a beautiful delayed pass from Dan Biggar setting the team away and hooker Scott Baldwin scoring from close range. The Fijians nearly scored at the other end immediately afterwards, former Cheif Asieli Tikoirotuma making a great bust, but Ben Volavola missed the resulting penalty, not for the first time.

At 17-3 shortly before the half, things looked good for the dragons.

The second half was a tighter affair. Fiji started with a bang, with Tikoirotuma combining with Nagusa to send Goneva over for surely the try of the tournament thus far. The islanders looked dangerous, forcing the Welsh back into a more conservative approach.

With Nemani Nadolo suspended and lightning scrum-half Niko Matawalu nursing and injury, they just lacked that composure needed to break down an effective, but not insurmountable, defence. A great break by the awesome Leone Nakarawa mid-way through the half had to end in a try; it didn’t, and that was the story of Fiji’s resurgence.

As he did against England, Dan Biggar showed great composure and leadership to secure the win with a couple of late penalties.

There was a lot that was important in this match for the GAGR crew. For one thing, Fiji absolutely destroyed Wales’ scrum all night long. No turning or dodgy penalties, just pure men against boys dominance.

For another, Wales didn’t get a bonus point. And really never looked like getting it. This has substantial repercussions for Pool A.

As the table shows, even should the Wallabies lose to England, with zero bonus points, they would still be in a fairly good position to qualify thanks to a healthy points differential against Uruguay and Fiji (vis-a-vis the Welsh) and Wales’ awful scrum. That said, Gareth Davies and Dan Biggar look awesome in the halves – surely the best combination in the Cup so far – and give the Walking Wounded a lot of direction and shape.

As for Fiji, they’ve had a rough time of it with matches against England, Australia, and Wales. I suspect that with Nemani Nadolo back, they might be just about to take out their frustration on Uruguay next week.

Should I Watch the Match?

Should you ever. Goneva’s try alone was a scorcher.