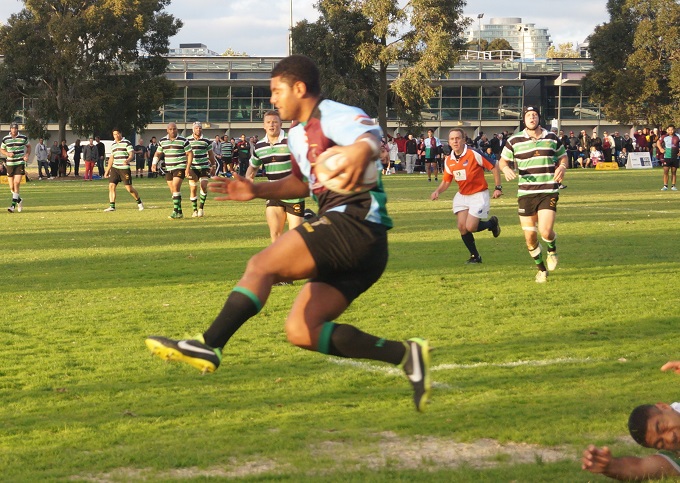 Harlequins travelled to Albert Park to take on Power House in Saturday’s top of the table clash. Jordy Reid and Alex Rokobaro returned for the visitors as they looked to extend their winning streak. 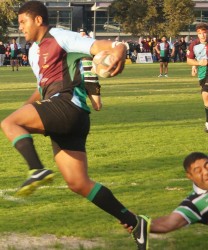 Valentini on his way for his second try of the afternoon

Quins trailed after a quarter of an hour when Adrien Boulliet slotted home a penalty goal to open the scoring. Harlequins had a chance to reply from the restart but opted to look for touch and were rewarded with a try to Jordy Reid after a throw to the back of the line out to take the lead 5-3.

Power House were back in front on the half hour mark with Danny Hicken breaking through the middle past Kemu Valentini to supply his wing partner Albert Aiopoluetu  11. Bouillet converted to make it 10-5, but the home side’s lead lasted only six minutes. Quin’s fullback Justin Marsters joined the line to feed Larry Manu, touching down out wide to level the scores. Manu should have extended the lead on the half time whistle, with Valentini spreading the ball wide only for the last pass to be spilt. The sides went into the break tied up at 10 all.

The second half was a Harlequins masterclass. Flyhalf Kemu Valentini started the scoring on the 46th minute with a penalty goal before Manu got his second to give the visitors an 18-10 lead. Power House got back to within five with a penalty goal before a ten minute period of ill discipline settled the game. The home side committed repeated infringements in their own half conceding field position and eventually points. Valentini kicked two more penalty goals as Quins kicked to a 24-13 lead.

The introduction of winger Billy Valentini reaped immediate rewards as the youngster utilised his speed, size and skills to put the game beyond doubt. His first try in the 65th minute displayed why Valentini is the hottest young prospect in Victorian rugby beating players down the left and showing a real turn of speed. His second just a couple of minutes later was a result of some quick with the ball shifted down the short side where two Power House players lay injured. Valentini again showed plenty of toe to touch down and round out a 36-13 win for Harlequins.

In other games Melbourne fought past a spirited Endeavour Hills taking the points 27-13, University notched their second win, against Box Hill, and  Footscray edged out Southern Districts 29-23 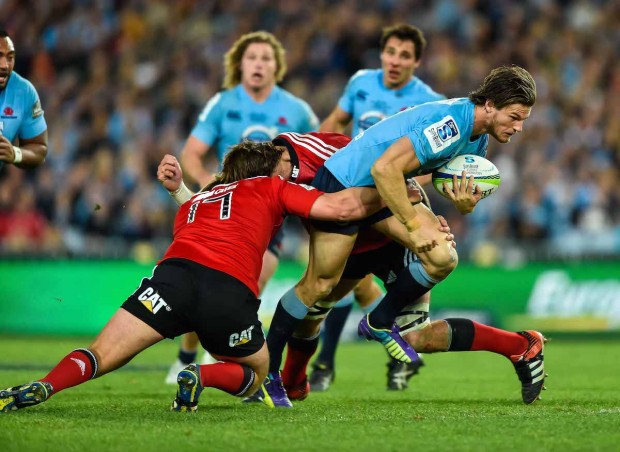 The Waratahs, fresh off a stunning victory against the Rebels last weekend lie in wait for the arrival on Sunday of the red-hot Crusaders from New Zealand.

Waratahs – they have slogged their way to second place in the Australian conference behind the Brumbies and have a 2-3 record. Their season comprises a hard-fought win against the Force, two maulings in the Republic from the Lions (at altitude) and Sharks, and snatching a late victory from the Rebels in Melbourne last Friday.

Their forwards have been more serviceable than the backs, but they were late to too many of their own rucks which meant they lasted longer, and the ball made slower. A constantly re-shuffled backline due to both injuries and form, has lacked cohesion at times but outside backs Israel Folau and Andrew Kellaway have been strong performers.

Sam Whitelock – Crusaders’ skipper and world-class second rower
Crusaders – they sit on top of the powerful New Zealand Conference after winning all their first five matches against the Brumbies, Highlanders, Reds, Blues and Force. Three of those victories were secured late in game after being well down at half time including against the: Highlanders (6-17), Reds (7-20) and Blues (5-21). This shows the Crusaders, like their All Black parents have either a worrying habit of starting slowly or good habit of finishing well. Possibly a bit of both.

New Crusaders coach Scott Robertson seems to be making his mark on the team already and he has molded his attacking platform around youthful players who performed well in the New Zealand Mitre 10 Cup such as Whetu Douglas (8), Mitchell Hunt (10) and George Bridge (11). The Crusaders consider their scrum one of their weapons and their talented lineout, led by All Black Sam Whitelock, is one of the best in the competition.

The  most notable recent game between these teams was the exciting 2014 Super Rugby final won by the Waratahs at ANZ Stadium in 2014, and since then they have won one home game apiece. But home games in this fixture have been more important to the Waratahs: they have beaten the Crusaders only six times in 23 matches and five of the wins were in Sydney.

The Tahs have been able to name an unchanged forward pack but it is again musical chairs in the backline with with Bernard Foley (concussion) and Rob Horne (hamstring) scratched from the 10 and 13 jerseys and replaced by rookie Mack Mason and Israel Folau moving up from fullback. Cam Clark comes in from the bench to take the 15 jersey and Andrew Kellaway stays on the wing.

For the Crusaders a few movements in the forwards include Whetu Douglas who returns to no.8 after a week’s rest.  All Black loose head prop Joe Moody takes back his accustomed spot and Wyatt Crockett goes back to the pine.  Also young Scott Barrett who played an excellent game being rotated to the blindside flank last week, shifts back to lock beside Sam Whitelock. The backline is unchanged, led by Mitchell Hunt at first-five and All Black Ryan Crotty at second-five.

Digby Ioane scoring a try against the Force last weekend

The props – This will be a master-class for young Waratahs’ loose head prop Tom Robertson.  Not the heaviest, he will be up against All Black tight head prop Owen Franks.  The battle between the All Black loose head Joe Moody and Wallaby tight head Sekope Kepu will also be a highlight of this match

The back threes – The Crusaders are not as potent without fullback Dagg, nor the Waratahs with Folau moving to the midfield.  Ex-Wallaby Digby Ionae will be lethal on the right wing, but against him Kellaway has an old head for a young fellow.  On the other side of the field fill-in George Bridge will be against Tah Reece Robinson, who had a fine game last week, and at fullback Havili who has over 30 games for the Crusaders will see Tahs’ 2017 rookie Clark at the other end of the field.

Number 10 – Unlike the Waratahs, the Crusaders inside backs have been largely settled since round two. Look for The Crusaders to target number 10 Mack Mason at every opportunity on both attack and defence, and for Horowitz and Folau to take the ball and first receiver off broken play to take the heat off and keep the Crusaders guessing.

Scrums – The Crusaders had a big moan to anyone who would listen about the number of reset and penalised scrums last week. This will be a key contested area of the game with a large number of All Blacks and Wallabies on the park in largely unchanged forward packs. Look for fireworks at scrum time.

Finishing ability – Both teams have shown they have the mental strength, fitness and training to finish a game off well in the dying stages. Who will be able to do it on Sunday?

Both teams are rested and coming off good wins. The Waratahs using their third playmaker in six matches brings an unpredictability to the game.

At the set piece – scrums and lineouts – the Crusaders are likely to have an edge, but their goal kicking this year has been poor.  But his game won’t be won throwing stats at each other – it will be won or lost in the final 20min. It will be won by the team that can find gaps, apply pressure at second and third phase and close out the game. The Waratahs showed they can do it last week, they did it in the final in 2014 and again in 2015.

They will need massive support from a home crowd and a few brilliant plays. Can they do it in 2017?