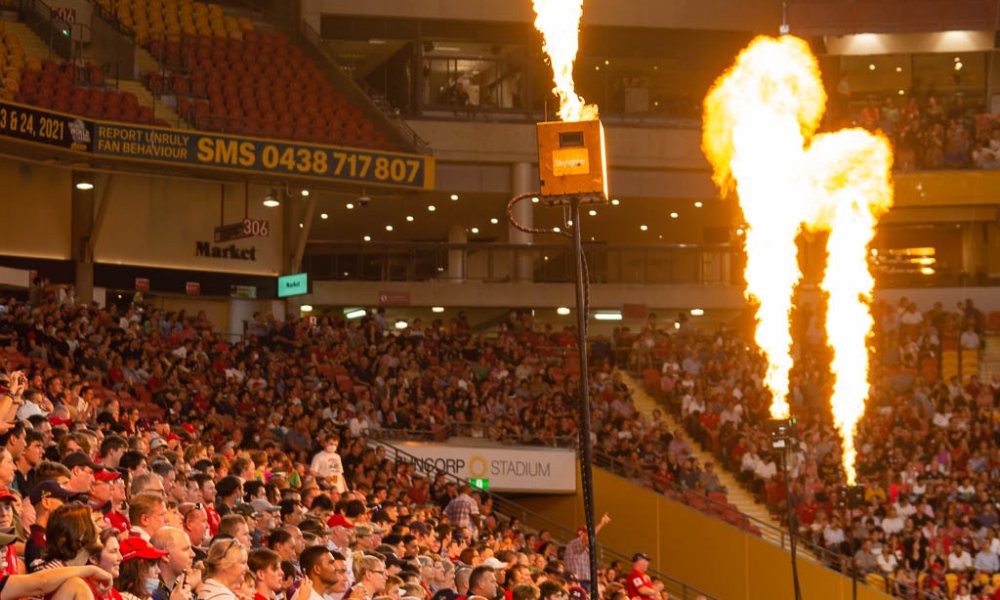 Tuesday’s Rugby News looks at JO’C sticking around, a turning point for the Reds, and an insight into what drives Carlo Tizzano.

James O’Connor to stay a Red 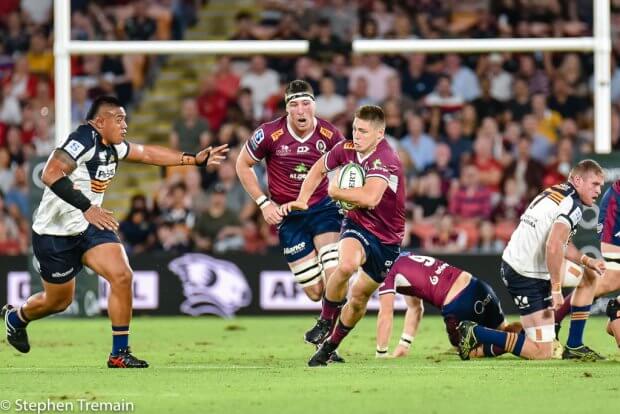 Great news for Reds fans and Australian Rugby. The Reds were looking at a massive hole in the halves next year with James O’Connor out of contract but JOC has, apparently, put pen to paper on an upgraded contract.

O’Connor tells of his journey back to Australia in this article.

“My time at Sale was hard. Really hard. I was playing 12 and 13 and it was hard rugby, tough footy. I wasn’t enjoying it. It was taking everything out of me to turn up and play each week,” O’Connor said.

“I still wasn’t fit, I had a lingering ankle injury. I hadn’t played good rugby since 2013. I had to re-learn the game and I was playing a role in that team that wasn’t natural to me.

“At the time, I thought, shit, I only have a year left in me. If I was ever going to come back (to Australia), that was it. That was the time.

“My goal was to play in the (2019) World Cup. Not that I thought it was my right. I wasn’t playing that good. I thought I would retire. I thought I was going to finish up. But I just wanted to have one more crack.

But it wasn’t that easy.

Former Wallabies coach Michael Cheika told O’Connor he would be considered for selection in the World Cup squad if he could find a Super Rugby club for the 2020 season.

When O’Connor went to market, there was no interest from Australian clubs.

He’d burned bridges at the Rebels and Reds, the Force had not yet returned to Super Rugby and the Brumbies and Waratahs had no interest in a player who had built a reputation for attracting more off-field trouble than on-field success.

“No one wanted me. No one in Super, that’s for sure,” O’Connor said.

“Scott Johnson got involved and the Reds became interested after I met with the board on three different occasions.

“I met with the coaching staff and just put my heart out there on the line. I told them my journey, my story, where I was at and they said ‘Yeah, we think you’re sincere. If you stick to these words, there is a contract there for you’.

Sam Cordingley on the Reds. 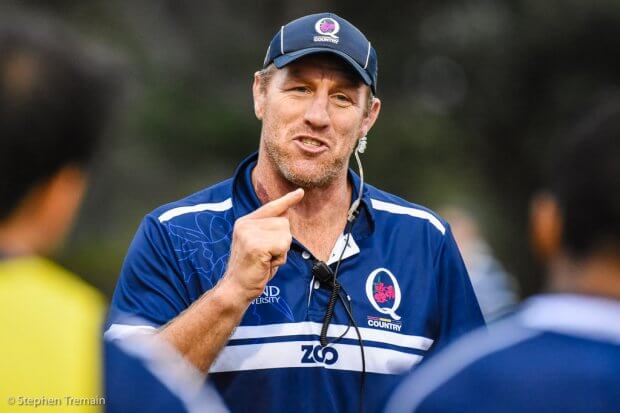 Brad Thorn lays down the law at half-time

Over at Foxsport Christy Doran had a talk to Sam Cordingley about Brad Thorn and rebuilding the broken Reds machine.

According to the article Sam and the Reds got interested in Thorn when they tried to recruit him as a player in 2015. The Reds didn’t have room for him but they talked anyway.

“We had a conversation around what does life look like after rugby,” Cordingley tells foxsports.com.au. “He was considering going back to Leicester, but we kept in touch around what he wanted to do post rugby.

“For us, that circuit breaker, we knew we had a young group to come through, a 40 per cent turnover in your key list, you know that you’re needing to rebuild and what better person than a guy like Thorny to be a part of a coaching set-up at the academy level; a hardworking values-based guy, who demonstrated a strong vision of how he saw the club.

“He had a strong affiliation with Queensland through his NRL days with the Broncos, so there were a lot of key ingredients in someone who could be a future coach for the Reds.”

By year’s end Thorn was on board and there began the Reds’ rebirth.

When Cordingley met Thorn they decided to make a long-term play.

Success would not be achieved overnight, but if they stuck together they would bear fruit later.

A week ago the Reds took a giant step to moving closer to achieving what they set out to achieve by booking a home Super Rugby final. Their come-from-behind win over the Brumbies was witnessed by 22,000 people – their biggest crowd in years.

“If I look at this year in isolation, it’s probably been five or six years in the making,” Cordingley said.

“It started with a period of turmoil. Back in the 2014-15 period there was some poor financial management, our academy hadn’t operated for three years. By the end of 2015, 40 per cent of our core playing squad had departed. That accounted for something like 700 Reds caps and over 300 Test caps, so there’s a big correlation to that period and our highest ever debt position as a club.

“We definitely needed a circuit breaker after that period and we looked at building a strategy to reconnect the Reds pathway and from that point on it was always going to be pretty long play; rebuilding our academy structure, Brad’s recruitment in 2016 was tied into that strategy.”

Thorn has been at the heart of the Reds’ return from the dead.

Carlo Tizzano has a goal. 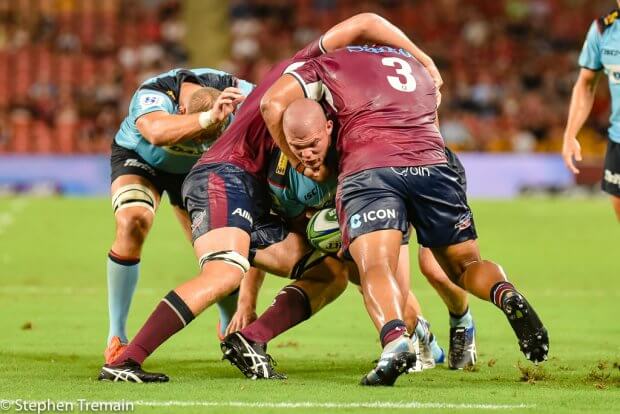 Carlo Tizzano is sandwiched in a tackle

Some hack named Nathan Williamson put up a nice story about Carlo Tizzano heading back to WA for the Tahs narrow loss to the Force on the weekend.

Despite the loss, Tizzano remained positive about the experience both personally and professionally.

“I saw my family before and after the game and that was awesome,” Tizzano told the media on Monday. “I haven’t been able to see them a lot over the past 18 months so that was really good.

“It was an awesome game, going up in front of the old fans, the Sea of Blue, they’re a great crowd.

“Everyone’s been pretty positive. We gave it our best crack and the biggest thing for us was giving the fans something to be proud of.

“Yeah, we lost by one point but we taken a lot of learnings out of it and we’re just going to get better and better.

“There were some real positives outcomes from that game and we’re going to take it into this week and Trans-Tasman.”

Defensive effort has been a major focus of the 21-year-old, setting the goal to be the competition’s leading tackler.

Whilst he has all-but-secured that, sitting 36 ahead of his nearest rival (Kane Koteka), he has a bigger goal on his mind: Wallabies selection.

“There’s been nothing but I’m going to keep knocking at that door and eventually they will open it.”

To do so, he is looking towards Super Rugby Trans-Tasman as an opportunity to make a name himself, and he was very clear about who he wanted to target as the Waratahs look to silence their critics.

“Whose top of the table at the moment? Crusaders then,” he said.

“I think it’d be cool to get a run against Ardie Savea as well, going against one of the best sevens in the world would be an awesome experience.

“We thrive off that. We’re a young team and from where we’ve come from the start of the year, the improvement that we’ve had, especially the circumstances with Rob leaving, I think we’re hitting some good ground and we’re excited for the future.”

Vote for the Supper Rugby MVP