Try or No Try?

Try or No Try?

There’s been lots of comment on the Tom Carter no-try decision on Saturday night. People have strong views on the subject.

Here’s the footage of the movement from three different angles.

As a starting point for my analysis I’ve summarised the comments of those who believe the wrong decision was made as follows.

Not everyone who believes it was a try has said all of those things; some have made other points, and some have said it differently, but those four points seem to be the crux of the argument.

Let me address each of those points.

Positioning of the Referee

In the following clip you can see the referee moves around at the rear of the maul so he can keep sight of the ball.

The first thing the referee needs to make a decision on was whether the ball was grounded. Only then does he need to determine whether that grounding was on or over the try line.

I don’t see where else the referee could have positioned himself to see the ball any better, and when it got close to the line he moved to the side to see whether the try line had been crossed.

I think the referee was in a good enough position to make a decision.

The Feed at the Ensuing Scrum

“When a player carrying the ball is held up in the in-goal so that the player cannot ground the ball, the ball is dead.  A 5-metre scrum is formed. This would apply if play similar to a maul takes place in-goal.  The attacking team throws in the ball.”

If the ball crossed the line but was not grounded then under Law 22.10 a 5 metre scrum should have been awarded with the attacking team, the Waratahs, being awarded the feed.

However, if the ball didn’t cross the line that law does not apply and instead we need to look at Law 17.6.

“A maul ends unsuccessfully if the ball becomes unplayable or collapses (not as a result of foul play) and a scrum is ordered.”

There is no doubt the Waratahs took the ball into the maul.

“When the ball in a maul becomes unplayable, the referee does not allow prolonged wrestling for it.  A scrum is ordered.”

Neither the referee nor the TMO believed the ball had crossed the line, and if that is correct, they were looking at a maul, which had collapsed.

It’s also pretty clear that the ball became unplayable immediately the maul collapsed and the decision made by the referee was correct under Law 17.6.

As to whether the ball crossed the line or not, read on.

Did the Ball Cross the Line?

The footage and images I’m about to refer to are obviously easier to see on a large screen where there’s been no compression required to get the clip down to a suitable size and format for the Internet and You Tube. So if you can’t see the ball in the clip, I’ll have to ask you to take my word for it that on a big screen in digital format you can see the ball.

Tom Carter was carrying the ball under his right arm while he was still on his feet, as shown here: 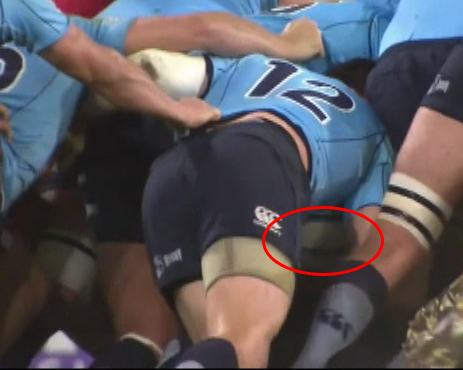 When he first went off his feet he placed the ball down on top of other players and well short of the line, as shown in the following image. 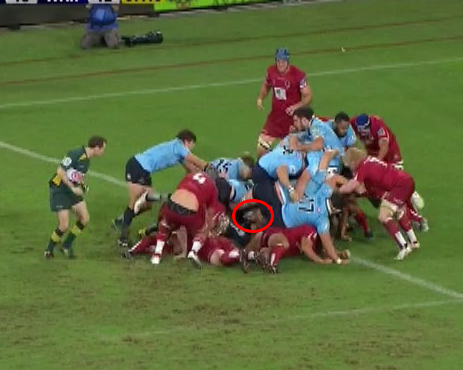 He then shifted the ball to his left side and was successful in grounding the ball but again well short of the line, as shown in this image:

To make sure I’ve not confused the ball with a boot, I’ve identified the boots / legs of the players around the ball here.

It’s easier to see the ball when it’s moving so I’ve slowed the footage from each of the angles and highlighted where the ball is in the following clip.

The challenge with this analysis is to determine whether, on the second grounding of the ball, there is any evidence of whether it was grounded before the try line, on the try line or over it.

The first thing to look for is a reference point between all the angles we have of the moment that the ball was grounded. In the following clip watch the movement of Greg Holmes as he gets to his feet.

In the following image you can also see that Holmes’s leg is parallel to the ground, so this is the same moment.

Again, in this image from the side view his leg is also parallel to the ground, so this is also the same moment.

So we now have three views of the moment the ball was grounded the second time.

If we return to Image number 5 above, where you can see the ball grounded, you can also see that the ball has been placed against Carter’s left thigh. You can also see Luke Burgess has his hands close to the ball as he reaches in trying to pick it up.  That gives us the first clue as to whether the ball is grounded on the try line or over it: if it is, why is Burgess attempting to pick it up? Why wouldn’t he instead be pointing to the ball to let the referee know he can see it grounded on or over the try line? There is no way we can answer that question, so we’ll have to look at what other evidence there is.

Of course the problem with Image number 5 above is that it’s shot from the rear and we cannot see the try line.

So let’s look at Image number 6 above, where we can’t see the ball or the position of Carter’s left thigh. The thing this shot is useful for is to show where Burgess’s hands are. We know his hands were very close to the ball at that particular moment and this shot shows that his hands are quite some distance away from the try line.

Image number 7 above from the side angle is more helpful. At the very moment that the ball is grounded it’s obvious that Burgess’s hands are well short of the try line. What we don’t know for sure is how far in front of Burgess’s hands the ball was.

However, the time difference between the side view where we can see the ball on the ground and the rear view when we see it being grounded again, is only 19/25ths of a second. To see how quickly the ball would have had to advance from the first point it was on the ground to the try line at the moment we can see it being grounded for the second time, I’ve added the outline of a ball to the side on view as shown in the following clip.

While my graphics showing the movement of the ball are a little basic, they illustrate how far the ball would have had to travel in such a short time to even end up on the line. It doesn’t look plausible that Carter was able to advance it that far, that quickly.

This isn’t conclusive proof, but I think it shows that if you had to make a decision, it’s more likely that the ball was grounded short of the try line rather than on or over the try line.

But there was some doubt in the referee’s mind and accordingly he asked the TMO for assistance.

What About Benefit of the Doubt Going to the Attacking Team?

The concept of Benefit of the Doubt does not exist in Rugby Union.

The laws regarding the TMO do not mention what should occur if the referee or the TMO has doubts about a decision.

Therefore there was no benefit of the doubt to be applied as there is in Cricket or in Rugby League.

So, did the referee make the right decision?

Having decided that the ball was short of the try line he made the correct decision in ruling that it was a collapsed maul where the ball had become unplayable ,and it was the defensive team’s feed into the scrum.