Let’s take a quick look at the results from the weekend’s matches, the table standings and the draw for the next rounds in these three great competitions.

The big story from Round 4 is GPS’s fine win over a Sunnybank line-up that Lance Free called ‘Queensland Reds A’. What a great turnaround from getting belted by Brothers the week before. The Brethren also turned their form around, going down to the Students and ruining my already shabby tipping record. The top half of the table has closed up again, auguring for an interesting season.

Near enough wasn’t quite good enough for Gold Coast against Wests. Sunshine Coast and Norths also had hard days down the pit. Of the winners, Sunshine Coast now face a good test against GPS and Souths have to front up against Easts. The Students–Dragons match (third v. fourth) match should be entertaining and informative. 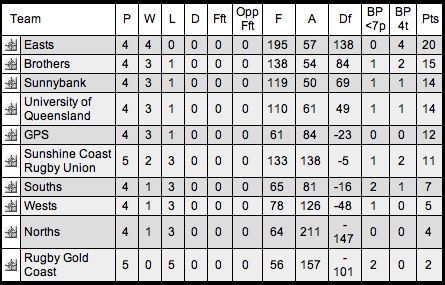 I predicted a great contest between Eastwood and Easts, and it didn’t eventuate. I don’t think the Woods are necessarily 50 points better than their nearest competition, it’s just that the Beasts’ organisation failed early on and they never got into the game. They’ve surrendered second spot on the ladder to Manly and have a few things to think about as they prepare to host Gordon.

Manly, Randwick and Sydney Uni took big steps forward and upward this week, at the direct expense of the teams they beat: Norths, Souths and Gordon respectively. Those three teams are back in the position of needing to prove that they have something to offer in 2011.

The play-offs among the bottom four saw the Rats and Two Blues get their second wins; Parramatta would have really relished the win over West Harbour. The pain continued for the Emus; they face Parramatta next round, and Eastwood the one after… 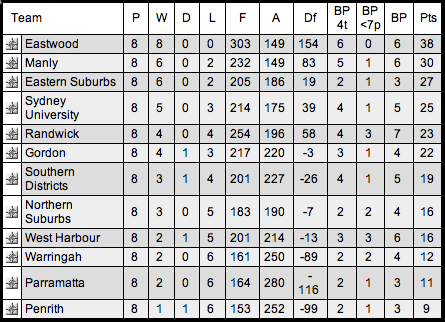 I don’t have match reports for these games so can only comment that the Lions did very well to take a win from the Eagles, and that the scoreline suggests the Whites–Vikings game was a cracker. Royals broke their duck, and that scoreline points to a season of ongoing pain for the Tricolours. The mighty Owls had the bye and will return freshened and formidable when they face Wests on Saturday — match of the round for sure, that one.

G&GR Fantasy League Update – Round 14
The Crooked Feed No. 5