The Wallabies: One Hand Tied Behind Their Backs

The Wallabies: One Hand Tied Behind Their Backs

We all knew that the semi final against the All Blacks was going to be a massive challenge for the Wallabies. Their performance in the quarter-final against the Springboks was heroic and produced a win I’ll remember for a long time, but let’s face it — they didn’t play well enough in that game to have the All Blacks worried in the lead-up to the semi-final.

Since the first half of their pool game against Italy it’s been obvious there’s been something amiss with the Wallabies attack.  Sure, in the second half of that game they started to look like the attacking Wallabies we expect to see, but much of that had to do with a bit of capitulation by Italy. In the next game against Ireland they looked poor in attack and the way they attacked in the two romps against weak defensive lines of the USA and Russia was hardly convincing. In fact the second half against Russia was really bad.

While I know there are arguments for and against certain players being in the side and I believe some selections were wrong, my issues are not with the players available or selected. It’s with the attacking plans that are being used. Attack is just one part of the game, but my focus today is on that one part. I’ll add some comments tomorrow on defence plans and performance.

In summary, in the seven halves of rugby where the Wallabies have faced a decent defence they’ve scored one try, seven penalty goals and one drop goal – a total of 29 points and an average of 4 points per half. Even against Russia, who fronted up in the second half, the Wallabies struggled to win the half. 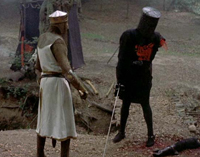 Expecting the Wallabies to win with such meagre attack results is like asking a prize fighter to win with one arm tied behind his back. In fact, if you add problems with the lineout and scrum not providing clean ball to attack with, it’s more like the scene with the Black Knight in Monty Python’s  The Holy Grail — ‘come back here and I’ll bite your legs off!’

Some of you will say the Wallabies kicked far too much and thereby wasted good attacking ball. I agree that there was too much kicking but I don’t think the level of kicking was way out of proportion to what is should have been. In the game against the All Blacks the Wallabies kicked on 44% of occasions they had possession. As you can see from my article last week, that level was not a major departure from what the Wallabies have been doing in 2011. The All Blacks showed that a kicking game can actually be very attacking and kicked on 60% of occasions they had possession. I rated 64% of the Wallabies’ kicking as positive and 72% of the All Blacks’ kicking as positive, which is not a huge difference. It was an improvement for the Wallabies from 53% against the Springboks. The issues that really resulted in the All Blacks having a superior kicking game were a much better kick-chase performance and the fact that their catchers were much more secure than those of the Wallabies.

The best performances we’ve seen from the Wallabies have been those built on enthusiasm, adventure and an attacking philosophy. Don’t get me wrong, you’ll never win big matches if you rely solely on attack, and the stars of the Wallaby backline cannot shine if the forwards aren’t winning the ball from the opposition and then providing go forward for the team. But I believe that the purpose of all that hard work in tight is to provide an attacking platform — surely that’s the Wallaby way!  Even when kicking for field position I see that as a way of establishing a platform for the team to win possession back in the right area of the field to launch an attack raid.

Rugby fans all over the world (and even in New South Wales) have rejoiced at the attacking philosophy of the Reds over the last few years with Will Genia and Quade Cooper in the thick of their attack. It was Phil Mooney who started the attacking revolution at the Reds in 2009, then Ewen McKenzie came along in 2010 and turned an attacking team into a winning team.  But as Link is always quick to point out, there are a team of coaches behind the Reds’ success — particularly Matt Taylor and Jim McKay. Taylor is the defence coach (but his portfolio at the Reds covers a lot more than that) and we’ve had him on a couple of G&GR Podcasts in 2011.

We’re going to have to get Jim McKay, who’s the attack coach, on a podcast as well because I’m sure you’d all be fascinated to hear his philosophies on attack. Bob Dwyer is a big fan of his approach to attack and regularly makes reference to Jim’s expertise in his articles for G&GR. Some of Jim’s core beliefs include ‘the purpose of attack is to create a number of chances to score’ and ‘in attack you should have a go, back yourself and never give up as this is the Aussie way’.

If you look at the Reds attack it’s easy to see the application of those philosophies.

So what has happened to the Wallabies’ attack in this World Cup? Did Genia and Cooper decide to abandon the attack philosophies they spent most of the year working with? That seems unlikely to me.

When attacking close to the ruck the Wallabies seem to want to slow things down so they can get a pod of forwards organised before taking the ball. At the Reds Genia and Cooper know that quick ball is what drives their attack, so I doubt they are seeking a game built on slow ball.

There was a perfect example of the Wallabies’ approach in the game against the All Blacks on the weekend. In the last few minutes of the match, the Wallabies desperately needed to score a try, then win the kick-off and score again to try to force a draw and extra time (however unlikely that was). What I found most frustrating about that sequence was that we as spectators knew the urgency but the players didn’t seem to. I’ve seen comments in the forum this week putting the blame for this on Genia, but that ignores two facts: there is no point spinning the ball wide until some space has been created to attack; and  Genia only passes the ball wide when Cooper calls for it.

Watch the video below and you’ll see that Cooper doesn’t want the ball so Genia keeps calling the forwards to take the ball on again. You’ll also see that the speed of the forwards recycling the ball and going again is so slow that there is no pressure on the All Blacks defence and they just make the tackle, then have plenty of time to re-set their line — and as a result, no space ever opens up for the Wallabies to attack into. When eventually the Wallabies do move the ball wide, there is no space in the defensive line and when Adam Ashley-Cooper slips, a wave of All Blacks pounces and the ball is turned over. A warning: it’s painful to watch, particularly when the Wallabies are awarded the penalty and Genia has to wait for the forwards to get up off the ground.

A similar thing happened in the first half when the Wallabies went through 12 phases with the forwards pounding away near the All Blacks’ line until Cooper called for the ball and took the drop goal option. Patience is one thing but just pounding away, doing the same thing phase after phase but making no ground against a side that is very good at the breakdown, doesn’t seem like much of a plan to me.

When the Wallabies do send the ball wide they also seem restricted in their approach. In their entire World Cup campaign to date the Wallaby backline has run just four first phase plays from scrums or lineouts:

Now don’t all rush to your copies of the game footage to map out those plays for future use – they’re hardly something new and they didn’t produce much of a result anyway. In fact if there were a definition of ‘first phase attack play’ in the dictionary I doubt that an inside pass to the blindside winger would be included. But that’s it — that’s all the Wallabies have offered up in their six games at the World Cup.

Here are some examples of the Wallabies’ ineffective attack when they sent the ball wide in the game against the All Blacks.

So it’s not only a lack of imagination with the Wallabies attack. It seems to be a lack of understanding of how you create space and how you take advantage of that space.

While there have been problems securing clean ball to attack with from some scrums and lineouts, there are many more occasions during the tournament where the Wallabies were in great position to launch an innovative attacking play and had clean ball to do so but still didn’t.

Again, it doesn’t seem logical to me that with players like Genia, Cooper and Digby Ioane from the Reds complemented by Kurtley Beale and James O’Connor, the players would decide on the field to restrict their attack like this.

Combined with the fact that this is not something that happened in just one game, and incorporating the amount of kicking the Wallabies have done, I can only conclude that this restricted approach to attack must have been a plan imposed on them by the coach.

Why would any coach, let alone the coach of some of the most attacking players in world rugby, adopt this approach? I can think of three possible reasons:

If the team was not attacking the way the coach wanted during a match, then surely he could have sent a message out with one of the runners or addressed it at half-time, and we would have seen a noticeable change. While the Wallabies started to move the ball a little more in the second half against the All Blacks, there was no significant change in what they were doing, which suggests to me that they were playing the way they had been instructed by the coach.

There is also the question of Cooper feeling the pressure of the expectations on him at the tournament, but I would have thought that any pressure he felt would have led to execution errors rather than going into his shell and restricting the attack.  Again, if this was an issue and Cooper was acting like a boa constrictor, isn’t it the coach’s job to relax him and restore his confidence?  And if that wasn’t working then why wasn’t a selection change made?

The Wallabies now seem to be almost totally reliant on counter-attack from Beale, Ioane, Cooper and O’Connor, which in my opinion leaves too much to chance.

I fear the life is being sucked out of the Wallabies’ attack but I hope we see signs of a spark this week against Wales. If we don’t, the patient may need major surgery.