The RWC15 Winner: By the numbers 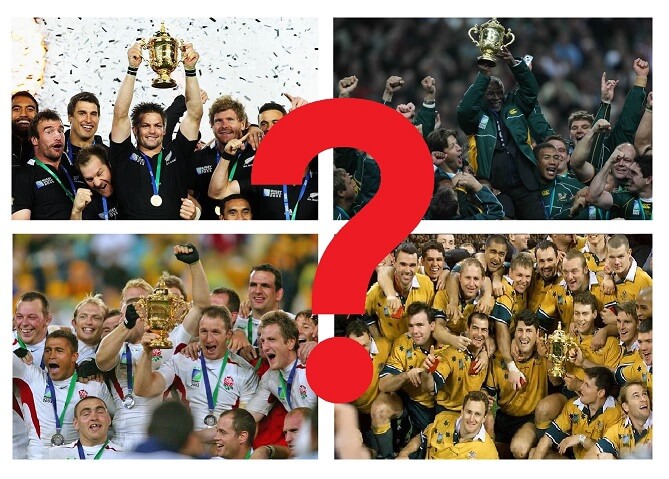 The RWC15 Winner: By the numbers

Winning the Rugby World Cup ain’t easy.  Since the tournament began in 1987 there have only been 4 winning nations.  Have a look at the squads of each winning team and you will see a team of greats, but what you will also see is a perfect combination of youth and experience.  So who has the balance right leading into this RWC?  What do the numbers say?

Before the 2011 World Cup I remember reading a lot about how hot Australia and Wales were at the time but how both teams were ‘too young’ and couldn’t win the RWC.  Sure they will trouble some sides but eventually, their lack of experience will be their demise.  2015 would be a more realistic target and if they can maintain their core group of players then, look out world!

As it turns out, the naysayers were right, the black juggernaut took it out and were crowned the best team in the world.

Leading up to this year’s tournament I started collecting data on the past winners to see if there was a trend, a set of numbers that could be used as a benchmark for where this year’s winner will need to be.  The magic numbers.  Indeed there was.  I crunched a lot of numbers but in the end it boiled down to two; the average age of the team and the total number of test caps within the team.  These two numbers beautifully summed up the mix of youth and experience.

It’s worth keeping in mind that this was purely a statistical exercise that I did for shits and giggles before realising that others may be interested in the outcome.  There were some serious limitations on the quality of the data that I could gather, the further back in time I went.  In terms of historical data, the best I could do was to gather stats on the winning nation’s starting XV in the final.

The first thing I noticed when I looked at the numbers above was the impact that the game turning professional had on the amount of test caps teams were able to amass; when I graphed the data it was even more pronounced.  The trend line produced from the data in it’s entirety was quite steep and in my view at least, when projected forward to 2015 was a little exaggerated.  I took a look at the trend line of the data from the professional era World Cups (’99-’11) and the relationship was much more linear and sensible.  This was the data I would use.

Armed with the magic numbers, I started collecting the data on the 31-man squads for each nation.  Whilst waiting for the teams to come in and for all the RWC warm up games to finish I had a play with the data and found a few interesting tidbits.  If you are the kind of fan that loves an obscure fact to toss out at the pub then read on!

The most experienced and least experienced are obvious and in case it needs explaining, I selected a team for each nation that would yield the greatest number of caps.  This team contained 2 props, 1 hooker, 2 locks, 3 backrowers, 1 scrumhalf, 1 flyhalf, 2 centres, 2 wingers and 1 fullback.  That was the only selection criteria.

There were some glaring numbers to come out of that.  The fact that Tonga and Samoa feature on both the oldest and least experienced squad lists gives an indication why the teams that produce some of the best natural Rugby players in the world, struggle at World Cup time.

Some honourable mentions go to Italy and Romania for coming 4th and 5th respectively in the most experience squad list.

A big surprise for me was England’s numbers.  They have the second youngest squad and are 13th from 20 nations in terms of total test caps.  For the host nation, in without a doubt, the toughest pool, this is not a good starting point.  Excellent!

Lastly, the most useless piece of trivia: The nations with the most amount of ‘Centurions’ (i.e. players with 100 test caps or more). 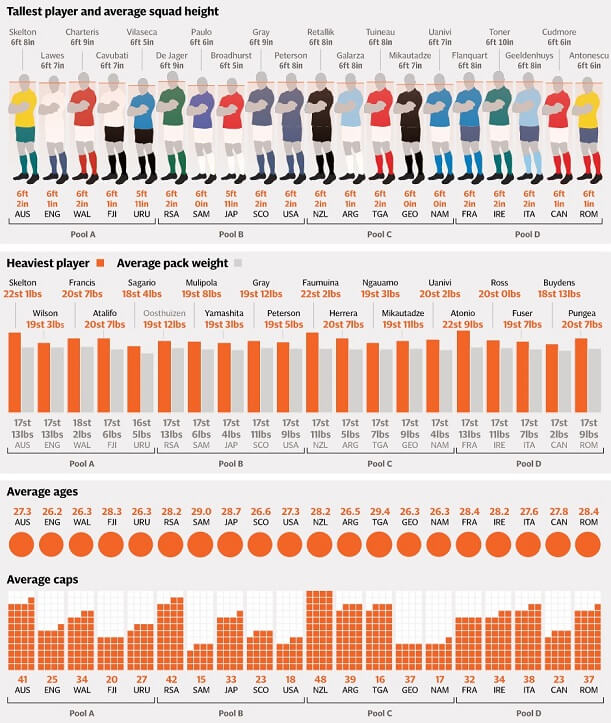 Who is looking good?

Getting back on track with my original objective – predicting the RWC 2015 Winner – there was a few ways that I could have gone with the data.  The age field is simple; too young = bad and too old = bad.  I wanted to know which nations were closest to the magic number for age.

The experience field was not as cut and dry.  The objective was initially to find the nation that could field a starting XV that was as close as possible to the magic numbers.  When I started tallying the data though, I found that a few nations had more than the required level of experience.  This can’t be a bad thing surely?  Certainly not if they haven’t sacrificed youth to achieve it?  I couldn’t decide which way to go so I did an analysis on both scenarios.

I enlisted the help of Green & Gold Rugby‘s brightest and best looking Rugby experts from around the globe to compile for me team sheets of the most likely starting XV for what I considered to be the top 10 nations.  Using those First XV’s I crunched the numbers and ranked them.  As I said earlier, age was straight forward, the closer the team was to 28 on either side, the higher they ranked.

There may in fact be a magic number. I may in fact have a very impressive… erm…. spreadsheet, but there is no mathematical formula that can tell us who will win.  That being said, that didn’t stop me trying.  I still did some rather crude averaging out of ranks and the like to decide a winner.  As I said above, I ran two calculations.  The first based on who was the closest to the magic numbers and the second based on the closest to the magic age and the most amount of caps.  For the purposes of this exercise, the first is probably most relevant, but as you can see below, it doesn’t really matter.

So there you have it.  An entirely pointless but very interesting look at the Rugby World Cup 2015.  Who do you reckon has the balance right?