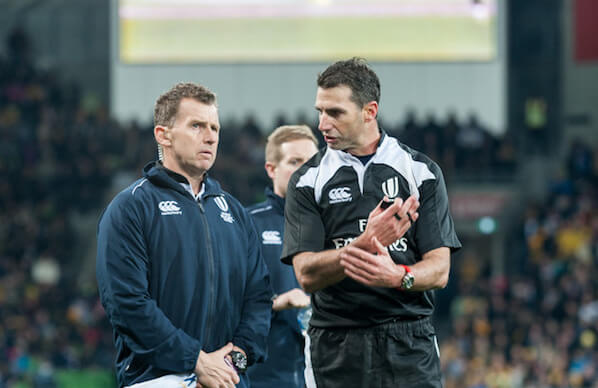 Looking at some of the referee decision in the weekend and seeing some of the comments about these, I decided to look at a decision that appeared to be controversial from the social media posts and go through the process a referee does for managing these incidents.

Note: These are my ideas and are not any official answers to any issues or questions you may have. I’m happy to take questions and answer them based on my understanding of the laws and their application, but in no way is this an official answer.

This one seemed to be one of the most controversial decisions and certainly looked a bit rough when viewed live. Not having the benefit of a TMO or slow motion replays, I think I would probably have seen it as a player desperate to prevent a try and going for a touchdown but not getting there. I would have likely called it a ball knocked dead by Red and given Yellow a scrum on the 5 metre line.

However, and there is always a however, the process a referee and TMO have to follow is clearly laid out by World Rugby (WR) and they would need to do this. One thing to note is that whether a ball is knocked back like this or knocked on for an attempted intercept, the process is the same. Calling for a different process because it wasn’t an intercept attempt is wrong.

Slow Motion and the TMO

This is an area that I think needs rework. The slow motion is a really good tool for seeing things such as a ball being lost out of the hand or not as a try is being scored, whether a player has hit the line of touch before or after a try is scored and where the initial contact took place in a high tackle. I’m not so sure that it gives an accurate view of things like the intercept/knock back and that while the hand might show a player trying to hit the ball up or down I’m not sure that in the heat of the moment what it shows can be used to clarify the intent of the player.

I think that the TMO puts too much into the slow motion at these times, and I’m not sure that they understand the technology and what it is actually proving or not. However, it’s important to know that they are doing this because it is so much a part of the process they use.

Firstly, was the play a deliberate knock on or not? Here the referee has to try and identify whether the player was attempting to catch (or touch down) the ball or was deliberately knocking it out of the way of an opposition player. This is very subjective because unless you ask the player, and he/she answers truthfully, you won’t ever truly know. The referee has to look at the scene and try and determine if the player was actually going for the ball or just trying to prevent the opposition from getting it. Most players understand that they are going to get penalised for a deliberate play and while some do it in the heat of the moment I actually believe most players at least intend to catch the ball, or in this case touch it down, even if there really wasn’t any chance of them doing so – next point.

I think it this case, it would be reasonable to assume that Hegarty was actually trying to force the ball down before Luamape did.

Secondly, was there a real chance that the player would either catch the ball or force it down? This like the previous can be subjective at times and if there is no real chance then it is to be considered in the same line as a deliberate knock down. This may not seem totally fair, but that’s how it is. I think this is an easier one to rule on. In most cases you can tell whether the player had a realistic chance of getting the ball or not and while the player will mostly disagree and say they did, I’m comfortable in telling a player that I didn’t think there was any hope.

In this case, I thought Hegarty was in a position to successfully force the ball down, but the slow motion replay made it look worse than it was.

Thirdly, did the event happen is such a way that it prevented an opposition who was likely to score from doing so? Again, it can be subjective at times and a referee has to try and determine the outcome for the attacking player if the event didn’t happen. If it was a 2 or 3 on 1 with an open goal line, it’s pretty clear cut. No other defenders and all the receiver had to do was catch the ball and score, then I think most people would agree that it did prevent a try from probably being scored. However, in other cases the referee has to determine what might have happened and depending on the experience of the referee and what his view of the incident was the result could be different.

The law for a penalty try states that “….foul play that prevents a possible try from being scored, or scored in a more advantageous position” This is deliberately vague as it is much easier to argue against a try definitely being scored and allows the referee to make a subjective judgement. It also puts the advantage on the side that isn’t causing the foul, and I think this is the correct way to look at it.

In this case, I think it was a stretch to say that Luamape probably would have scored. However, both the TMO and the referee thought differently and as they are the people on the spot, what they think is the only thing that matters.

Looking at the event at game speed when it happened, I thought that Hegarty was trying to force the ball down and that in the process of attempting that he knocked the ball out of play. I didn’t believe it was an intentional knock back and that the outcome would be a scrum to the Hurricanes on the 5 metre line. Once the TMO got involved and the incident was run in slow motion the referee and TMO both judged that while Hegarty may have intended to do that, they felt that he wasn’t in a position to do that and that his action of knocking the ball out of play prevented Luamape from probably scoring a try.

In this case therefore it was Hegarty’s actions that prevented the try and so a YC and Penalty Try was the correct punishment for the way they applied the law.

This is one of those incidents that, because it is subjective, the bias of the people watching the play will form a large part of their judgement on the incident. I’m not sure many Hurricane supporters would have argued too much against the result, as people rarely argue against something that is beneficial for their team. I don’t believe that the referees are biased, but I do think that in most cases where there is some doubt the benefit of the doubt is more likely to go to the dominant team. I think a large part of the issues that people have brought up in the Trans-Tasman competition were more to do with the NZ teams being dominant than any bias. However, I guess that is no consolation to the Australian supporters.