The Last Position – The Referee 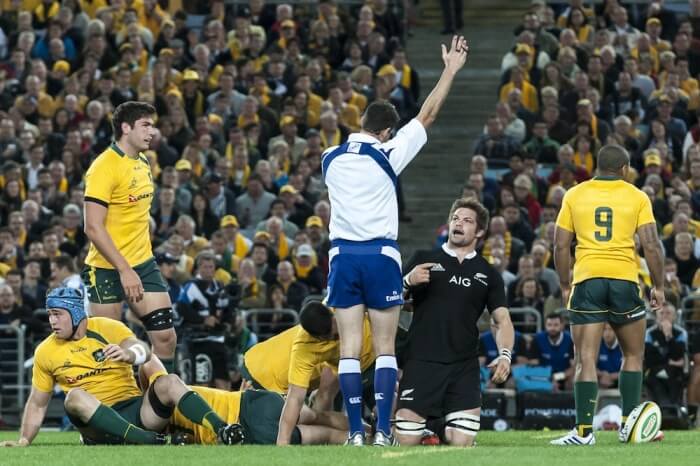 The Last Position – The Referee

The referee occupies a unique position on the field. Tasked with managing the game, and let’s be fair, without the referee no game would be played; by law he has the right to make any decision in accordance with the laws of the game. The law that gives him/her this right (6,5.a) also requires him/her to apply the laws fairly. The referee will make decisions based on what he/she sees at the time and will apply the laws as directed by World Rugby and sometimes with some particular country, state, region or even competition direction.

The referee will have to deal with the players, coaches, spectators, TV commentators and ball boys on the decision they make during a game. All of these people will have different and conflicting opinions on what occurred, why the referee got it wrong and why the decision should have gone for their team rather than those cheating b*stards on the other side. All of them will take great delight in pointing out where the referee got it wrong, what law should have applied and how they would have won if only the referee had not picked on their angels players so much.

In order to survive this and continue to undertake such a thankless task referees generally have the constitution of a berserker Viking combined with the hearing of a concrete post and the ability to completely tune out the loud complaints that hit them from every side. The good ones will have the self-confidence of a bank manager turning down a loan and the poise of a politician who has won a seat in a landslide vote. They will completely ignore the complaints coming on all sides and focus their talk on the captain where they will use the immortal words of Nigel Owens “I am explaining my decision, not debating it”.

In all fairness to the players, spectators, coaches and everyone else who disagrees with their decision, rugby is a dynamic game with so much happening that at almost every contest you get a different picture depending on where you are standing and what side you are looking at. The good referees are those that manage to get to the best position to rule on what is happening in accordance with how the game is being played. This is usually a combination of both the technical and tactical application of the laws and can often seem to be completely inconsistent and almost biased at times. Of course expecting the players, coaches and spectators to know and understand this is always a complete waste of time and so often the referee will find himself explaining the decisions. Often the hardest part is finding words small enough so that the listener can understand them.

In general, there are three main types of referees.

The first is the ex-player who spent the vast majority of his or her time playing the game and once the injuries got too much they decided to take up refereeing as a way of keeping involved in the game. These referees generally get on well with the players as they can relate to the frustrations that occur and they tend to turn a bit of a blind eye to the mouthy 9 getting his just deserts in the ruck. Having played for years, they also know most of the tricks players will try on the referee and generally don’t fall for these in a game. At times they can be a bit light on the laws and like players they just want the game to flow. After the game they like nothing better than sitting down with the players and having a beer while they explain to the 9, for the 100th time, why he was off side and how his calls on the opposition were wrong.

The second is a person who decided very early on that being stuck on the wing and blamed for every loss wasn’t for them, tried coaching but found that too complicated and was talked into being a referee because “You know, how bad can it be?”. Unless they have spent a lot of time refereeing they often don’t understand the subtle tricks and can often be swayed by a captain who is being exceptionally polite and who calls him “Sir” three times in every sentence. These referees can often be as confused as the players and spectators on what happens in the ruck and a smart captain is often able to influence the decisions there. After the game they tend to drink with the side that won as that’s the captain they got on with best during the game. A really good captain who expects to get this referee again will often buy free drinks for him all night, thus guaranteeing a win in their next game.

The last type, and probably the one most people hate, is the person who took up refereeing because they got beaten up by a prop and/or hooker once when they played. They decided to take up refereeing in the hope that they would one day be in charge of the team those people played for and would use their powers to pay those players back.  Generally these types are the most pedantic referees who will have a good understanding of the laws but won’t understand how to apply them in a way that allows the game to flow. They will be proudly let people know how many players they “Carded” in each game and secretly want to get to a stage where they card so many players that the game is called off. These referees often resemble (and are called) a past German chancellor who wanted to rule the world and after a game they will go looking for people to talk to but won’t find anyone who will say more than hello and then be called away for “their turn on the bar”.

I personally haven’t had too many issues post game where people have come up questioning why I called their 7 off side in the first 10 minutes and yet at exactly 57 minutes into the game the opposition 7 did exactly the same thing and wasn’t pinged for it. (How in the hell I’m meant to remember the game in that detail I still don’t understand) Generally I try to go for a cool down run and stretch that gives coaches enough time to also cool down and can usually fall back on Law 6, 5, a.  However once or twice (or more) I have had to sit though some detailed one-sided discussions on how I got things so wrong. Generally my fall back here is a surprised face wondering how I lost the game despite not missing any tackles or dropping any passes like their players did. When that fails then it’s down to a quick drink and move onto the other team.

Drink: Anything that is offered – usually by the winning captain.

Politics: Anything authoritarian and secretly they would like a dictatorship – but only if they are in charge.

Motto: If I didn’t see it then it didn’t happen.