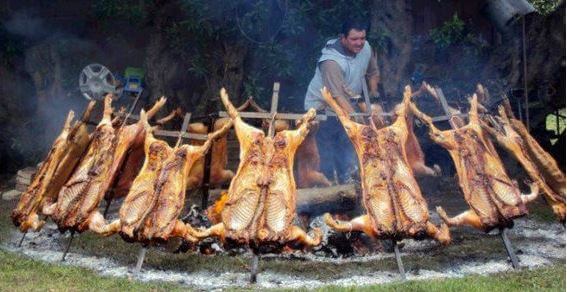 Buenos días comrades and welcome to episode 24 of the Chewsday Chew.

We’re back on track this week and looking at continuing our attempt at accumulating the Team of the Tourny for the Year of Our Lord 2022 (Southern) Rugby Championship – The Southern Belles.

And wasn’t it a weekend for the upset?

Firstly, I must say I admire David Kidwell’s impact with the Grandes Aterradores. You can see above the secret squirrels happy snap I got of him planning defensive drills at Pumas training camp last week. And the simple fact was that the ravenous Argies started their match by gorging on about 2x Aaron Smiths (170kg allegedly) in assorted bovine delicacies in an Argy-themed restaurant in Christchurch as an entree, and then continued to the stadium down the road where they chowed down on the rest of the Hobbit Town squad accompanied by a nice Chianti. Final whistle was 25-18. To be clear, the Argies didn’t create much. And their scrum and lineout were malfunctioning to the point of being diabolical at times. But they thrived off Kiwi penalties (14 and a cheese), they pillaged the breakdown (for 10 turnovers), Boefelli kicked everything that could be kicked (7/7) and defensively they simply belted the Hobbits continuously and mercilessly until even I started feeling strangely sorry for the Desperados in Black. For posterity, the Argies racked up 192 tackles made and 8 missed = 96% strike rate. There must be some interesting meeting invites in the calendars of the honchoes at the offices of Silver Lake Private Equity this week.

On a slightly different note, and one which I’m sure my local friendly Kiwis are just tearing themselves apart over, Michael Cheika now joins fellow Australian Eddie Jones as the only coaches in history who have taken 2 different national teams to victory over the (once) mighty All Blacks in New Zealand. I’ll just leave that there.

And from Christchurch to Church City, in Adelaide we saw the Wobblies pull their frustratingly regular party-tricks – the ‘iron from the fire’ and ‘how did they do that?’ routines – in downing the Springboks to the tune of 25-17. Coach under pressure and concerned about a 40% winning record? No worries, we will just go out and beat the reigning world champions. Again. It’s just what we do. Don’t worry about a lineout success rate of only 53%, or giving away 16 penalties and 2 cheeses, or having a tackle-made rate of only 80%. Nah. We just ran the enormous ones about enough to generate turnovers and fatigue.

Now don’t let the score or the stats fool you. The score was made respectable by the two soft Bokke tries of the last few minutes (which can be viewed variously as meaningless, or indicative of weak will, or simply fatigue). But the Wobblies won that match fair and square despite the usual freight train of vitriol and unrugby wailing coming from the Land of the Horrified Jaapies that, if viewed without context, would lead one to think a crime against humanity of a scale not seen since Stalin had been visited on the poor, innocent Dutch Dirt Diggers. Again, don’t be fooled into seeing this week’s diatribe of slander from South Africans towards the referee as a one off. As noted by Charlie and countless other contributors yesterday, World Rugby has a problem on their hands entirely of their own making in failing to snuff Jaapie theatrics like Rassie The Rascal and not stomping hard on divers (looking straight at you Anthony Jalonch) or agent provocateurs (looking at you Johnny Hill as enabled by EJ) in more recent times. And it’s now manifesting (again?) as another relentless cascade of putrid abuse towards match officials by rabid Afrikaaners. Something needs to be done about it, but I fear the horse has already bolted and I know not what to do now.

For the sake of clarity, the Modern Human Skewer Mariko Koroibete’s tackle on MyPimpi was legal. Get over it. And while Faffy DeTwerp’s yellow card was unseemly, and Nic White’s behaviour was a disgrace to the code, Faffy left the ref with little realistic choice given his repeated cynicism culminating with clipping his opponent flush in the face in front of 52x dozen internationally broadcasting TV cameras. What else was the ref going to do? That doesn’t excuse White’s dive which will live on in infamy for mine. But Faffy did what he did, so had to answer to the beak. Or does White respond by giving Faf a smack back and thus inviting vino, as per young Swain versus that filth English lock Johnny Hill?

Anyway, the day is done and the money in the bank. So to the matter at hand…

Loosehead – Slipper edged out Ox for mine with a 4. He didn’t own it and yes, he copped a hard day at the hands of Malherbe, but Herby is the best in the business right now and it wasn’t as one-sided as first glance indicated. Plus he showed great general skills on top of good meat and potatoes.

Hooker – Samisoni Taukei’aho earned a 5. He has the potential to be anything and really stood out in a losing side. That said, Montoya was huge and may be considered unlucky.

Tighthead – Malherbe. 5. I have a man-crush.

Locks – Etzy and Loodicrous were H.U.G.E in a losing team. They owed the air in lineouts, were powerful and (unlike some others) were in lock-step in scrums and were genuine running threats on top of their tackle counts. 5 each.

Loosies – Holloway played smartly and JMGS courageously but both were pipped for my vote by Kolisi as the pick of the 6ers for a 4. But Kremer and Matera took the other two backrow spots. Valetini must be considered unlucky regarding points, but the Argies were on a defensive mission from God.

Halves – Gonzo Bertranou was the best of a poor group of 9s. And Lolly was clearly the best of 10s.

Centres went to the Argies on sheer defensive effort and persistence.

Wingers – Boffelli kicked everything that could be kicked (7/7) and played the positioning game well. And Marika Koroibete turned in a game for the ages, and so earned the extra point to top it off. 6.

Fullback – Hodge was the best of the 15s. Solid, unspectacular, but bloody reliable. A forwards fullback.

The Saffa replacement fronties were class and I gave the other replacement jerseys to the Argies as a general combo ‘youse earned it’ effort except for Finlay Christie who I thought bailed hard in a sinking skiff.

Thus the Southern Team of the Week looked like –

Here we see the foibles of my system with Karl Marx popping up twice – the victim of rotation – two reserve halfbacks (driven by Hendrikse enormous game 3 weeks ago) and the two highest scoring players being reserve front-rowers. Plus I do recognise that 14 of 23 spots are currently from the team placed last on the current table because their tight 5 squads are so clearly superior to everyone else’s and Siya Kolisi is so irritatingly consistent at 6. However, I think the process is allowing the cream to rise to the top and should flush through such anomalies in the end.

Thus if we look at that team objectively, I don’t think there are too many arguments with what is shaping as a pretty dominant group that balances consistent individual performance with combinations. And as author, I do reserve the right to ‘review’ (or ‘sanity check’) the final Team of the Tourny to smooth any such inconsistencies.

I know it’s only early and I know it won’t ever happen, but I can’t help wondering wistfully about how this side would dismantle the famed Lions.

Anyway, there it is cobbers. Thoughts and opinions welcome…