The big surprise to come out of round 3 of Super Rugby was that this time, all the favourites won. The manner in which the Chiefs dismantled the Crusaders was probably the most empahtic result of the weekend whilst the Hurricanes proved that two wins in South Africa were no fluke by flogging a disappointing Western Force.

So here we go again. Green & Gold Rugby’s Power Rankings after round 3.

1. Chiefs (no change) – this was billed as the match of the round and you could just about argue it was. Not because it was close though. The Chiefs were uncompromising and smashed the Crusaders from go to woe. They’re firming week by week as title favourites. You wouldn’t expect the Highlanders to challenge their unbeaten season in week 4.

There’s plenty to smile about for the boys from Wellington as the Hurricanes start the season with three away wins.

2. Hurricanes (no change) – they find themselves on top of the ladder after handing the Force an absolute hiding. They’ve got an industrious pack that competes hard at the breakdown and their backline is chock full of talent. If they keep this sort of form up they’ll be there at the business end of the season. After three away games, they can put their feet up for the weekend before playing their first home game in round 5.

3. Brumbies (up 1 place) – they came away with a close fought away victory over the Rebels to solidify top spot in the Aussie conference. The Rebels took it to them for 80 minutes but the Brumbies kept their try line intact. Their defence is their biggest strength at this stage of the season.

4. Stormers (down 1 place) – despite staying unbeaten with a come from behind victory against the Lions in Johannesburg, the Stormers were anything but convincing. The attack they showed in round 1 has all but disappeared and they look like a team without a plan at times. Their defence is good enough to win games though and at this stage they’re the South African team to beat.

5. Waratahs (no change) – the Tahs had the weekend off with the bye and by virtue of teams around them struggling, find themselves remaining in situ on the power rankings. They’ll need to beat the Reds at Suncorp on Saturday night to stay there however and confirm that they’re still one of the favourites in 2015.

6. Cheetahs (up 1 place) – a last gasp victory against the struggling Blues was crucial for the Cheetahs. Like previous seasons, consistency is their biggest enemy and they’ll need to improve to record a win at home against the rapidly improving Bulls in week 4.

7. Sharks (up 1 place) – despite losing in a high scoring affair against the Bulls at Loftus, the Sharks are tracking reasonably. Round 4 provides a massive test away against the Stormers in Cape Town. They have the firepower to upset the undefeated Stormers but which Sharks will show up?

8. Bulls (up 5 places) – scored four tries against the Sharks and have finally got their season started. With so much talent it’s hard to see the boys from Loftus not being a force in 2015 but they’ll need to repeat the dose against the Cheetahs in Bloemfontein this weekend. 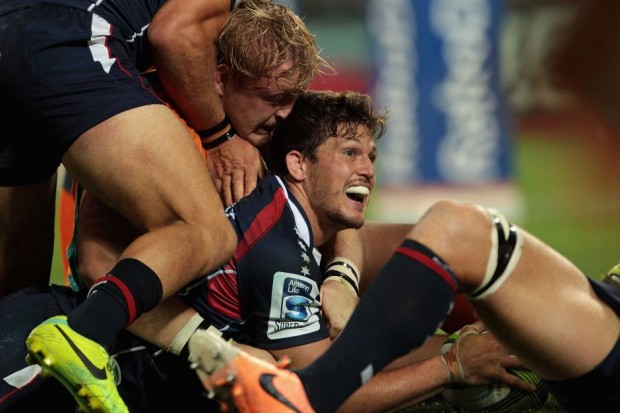 The Rebels are close to the mark but just need to improve their execution.

9. Rebels (no change) – went down in a thriller in the wet in Melbourne. They’re only one win from three games but they could have easily beaten both the Waratahs and Brumbies. They’re playing with great spirit and just need slightly better backline execution to notch up some more wins.

10. Highlanders (up 2 places) – recorded their first victory of the season against the Reds at Dunedin in just their second game. They weren’t convincing but were missing first choice 10, Lima Sopoaga. Life will get tough for them away against the Chiefs in round 4.

11. Crusaders (down 5 places) – all is not right in Canterbury. They got demolished by the Chiefs and are really struggling. They’ve got the weekend off to think about how to improve but at this stage they look a shadow of the team that almost won the competition last year.

12. Reds (down 2 places) – they battled hard in Dunedin but in the end weren’t good enough. They’re missing a regular 10 and Quade Cooper’s return in a few weeks time can’t come soon enough. With the Festival of Hate on Saturday night, they’ll be out to produce a big upset but it’s going to be tough. A win would provide a huge lift but they have to get past the defending champions first.

13. Force (down 2 places) – got blown out of the water by a dynamic Hurricanes outfit returning from South Africa. They were never in the game and got outclassed across the park. Their set piece is struggling and they’re missing the leadership of Matt Hodgson. The backline doesn’t look a threat at this stage. Ben McCalman is really carrying this team but he can’t do it alone.

14. Blues (no change) – were unlucky to lose to the Cheetahs at the death with a controversial penalty but that doesn’t change the fact they’re now none from three after their South African tour. They face fellow cellar dwellers, the Lions who have made the same long trip back from South Africa to New Zealand and you’d expect them to win at home. They need a win to get their season going.

15. Lions (no change) – the Lions are already firming as favourites for the wooden spoon. They led the Stormers for most of the game and then gave it up in the final 10. Rather than taking the draw they attacked for penalty after penalty after the siren but ultimately couldn’t get across the line. It’s going to be a long year for the men from Johannesburg.