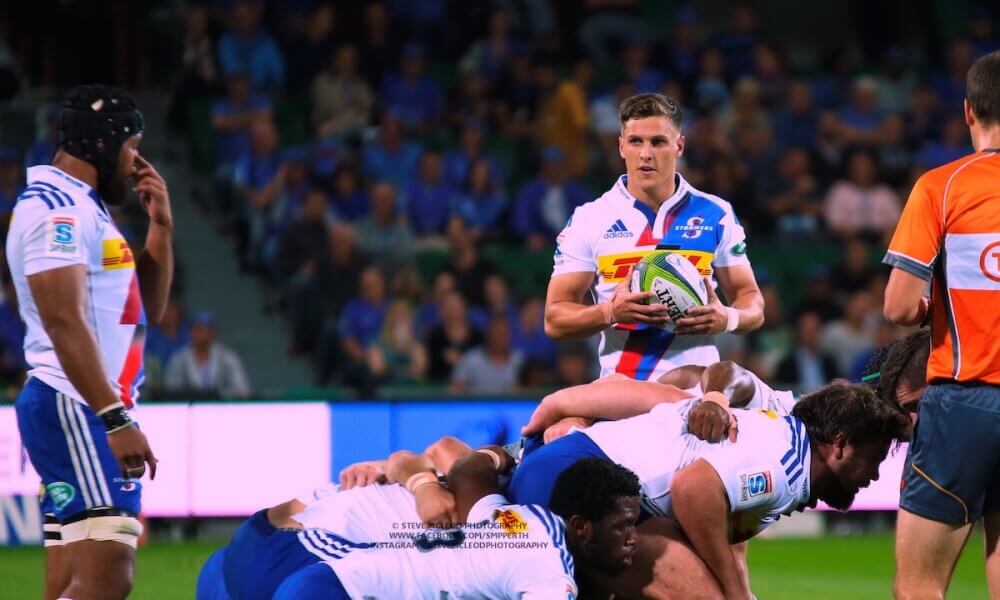 The Reds this season have exceeded all expectations. A young team with a rookie coach was supposed to be easy meat for more experienced sides. No one thought to tell the Reds what was supposed to happen. The Stormers may be under the Reds on the ladder but they have already played their games in NZ. Can the Reds keep their momentum going or will the Stormers attacking play be too much for the Reds brick wall defence?

A great half of rugby by the Stormers and especially Damian Willemse saw them score two tries and move out to an 18 nill lead before the Reds scored a late try to stay in the match but, the Stormers still took an 18-7 lead into halftime.

The Reds had no answer to the Stormers rush defence when they carried the ball and Willemse had the ball on a string in attack. The Reds didn’t help their cause with poor kicks for touch allowing the Stormers back three to attack from depth. Ben Lucas’s work at scrum-half lacked the speed and decisiveness of the rested James Tuttle and flyhalf Jono Lance made a few errors under pressure.

The Stormers controlled play for the vast majority of the halves play but the Reds were far too willing to kick the ball away instead of working the ball upfield.

The Reds started the second half with a quick try to get within four points of the Stormers but, within five minutes they had scored and converted their own try to maintain the gap they had taken into half time. The Reds again lacked patience and ideas in attack and resorted to kicking possession to the Stormers. In comparison, the Stormers kicks always seemed to be contestable.

The Stormers once again controlled the games tempo and field position. The Reds were not able to dominate the scrum or lineout as they have been doing in previous matches and much of their game is built on that dominance.

Late in the game, the Reds scored a 90 metre try through Filipo Daugunu to get within seven points and after the kick off a strong run from Aiden Toua and a penalty saw them with a lineout close to the Stormers line. The Reds tried to push the resulting maul over the line to score but couldn’t control it and it collapsed with the ball unplayable. That was the end of the game with a well-deserved win for the Stormers despite the late scare. The Reds would be secretly happy with a win and a losing bonus point on their African tour.

The Reds played hard but the only player I think I can mention here is Caleb Timu. For the Stormers though Stef De Toit, Damien De Alliende and Raymond Rhule all had great games. But for me, the guy who controlled things and was a handful with the ball with hand a foot was Damian Willemse. He is our GAGR man of the match.

This was a tough game for the Reds and the only guy who stood out for me was Caleb Timu. With a couple of Wallaby ineligible player running around at #8 he must be a strong chance of seeing some sort of gold jersey this season. James slipper also had a strong match.