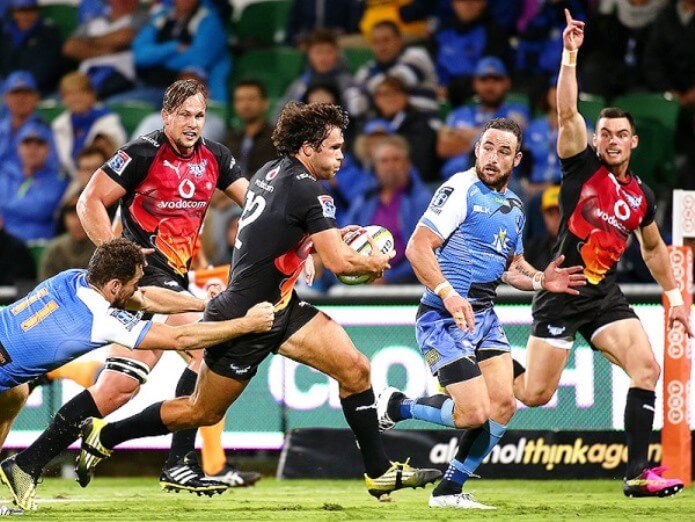 Round 10 saw no head-to-head between Australian teams.

Where there had been fairly similar approaches to Ruck Involvements in previous rounds, the range of opposition resulted in markedly different game plans.  However, all teams were attempting to maintain their defensive line by standing off Defence Rucks; all Defensive Rucks were at levels well below their 2016 average.

The teams with superior possession all lost (Brumbies 73%, Rebels 58% and Force 52%).  The winning teams both had lower Possession than their opposition (Reds 48% and Waratahs 41%).

The table of leading ruck involvements in Round 10 contains many new faces; including Harry Scoble, Hooker, on run-on debut for the Force.

Some new perspectives on the much discussed comparisons between the Australian No 7s.

The Waratahs have been showing a fairly even distribution across all player groups.  However, here we see the influence of prop Tom Robertson, and Locks, Mumm, Skelton and Lousi.

The strong rucking efforts of Force Hooker, Harry Scoble, was not enough to counter the fairly subdued efforts of his fellow Front Rowers.  The Force Backs provided make-up support with strong inputs from Prior, Morahan, D Haylett-Petty and Brache.

Impressive support of their ball carriers by all of the  Rebels Front Row; James Hagan had the top Ruck Involvements for his team (34T – 32A/2D).  Tom Robertson, Prop, had the second highest TRIs for the Waratahs (25T – 18A/7D).

As usual the distribution of DRI’s shows the greatest difference between the Australian teams, the respective game plans and response to the opposition.

The Brumbies Back Row fairly evenly sharing a high % of very few DRIs.

The Force were totally worked over at the breakdown by the Bulls who earned 14 TOW versus 5 TOW for the Force.  Arno Botha, BSF for the Bulls, earned an impressive 6 TOW.

The list is dominated by 9 Back Rowers, 2 Props, 2 Hookers and a single Lock.

Impressive level of involvement by the Brumbies Back Row (Pocock, Fardy and Butler) and Lock, Carter.

Mighty 60-minutes effort by James Hagan in his debut run-on for the Rebels.

Force Captain, Matt Hodgson, again showed his regular contribution including 16 tackles and 2 TOW from only 6 DRIs.  Hodgson continues to lead SR in tackles.

The table  includes only 6 RWC Wallabies.

Strong openings by the Brumbies and the Force.

The usual 80-minute players generally lift their involvement in the 2nd half of the game.

Team Profiles after Round 10

Individual Ruck Involvements need to be viewed in the context of Breakdown strategies, game plan and opposition.

Nevertheless, after the initial 10 Rounds of SR2016 some patterns have started to develop as shown in the following averages.

There is a range of about 20% in TRIs with the Rebels showing a high level of consistency.  The outcomes to date may reflect the disparities in the fixtures to date.  It will be interesting to see if these change over the 2nd half of the season.

The Brumbies have made the highest TRIs – 334 in its losing effort against the Highlanders in Round 10.

The Reds have made the lowest TRIs – 182 in its win over the Cheetahs in Round 10.

The range of DRIs is a much tighter 13%, with the Rebels consistently most involved in disrupting the oppositions ball; the Waratahs least involved.

The Force have made the highest DRIs – 117 in its loss to the Rebels in Round 1.

There is always plenty of discussion about the relative merits of Australian Open Side Flankers and their roles in their respective teams.

The No 7s role is complex, providing many of the links between the Forwards and the Backs.  Comparisons here essentially focus on the Breakdown:  Ruck Involvements and Turn Overs Won.

The tables below gives an update of those provided after Round 8.

Each of these players show a differing range of skills for the benefit of their team.

We have seen that the level of Ruck Involvements are different for each team and can vary significantly from game to game.

Clearly the Rebels, with the most Ruck Involvements, have more players contributing to the team effort.

Gill and Hodgson show identical contributions for their respective teams.

Not surprisingly, Pocock has the highest contribution in DRIs.

Effectiveness is  difficult to measure as outcomes can be impacted by important aspects such as game plan, quality of opposition, coach’s direction, role in the team, location of the ruck, objectives of the involvement and level of support from own team.

One key metric is the number of Defence Ruck Involvements for each Turn Over Won.

Clearly Pocock shows the highest degree of both effectiveness and efficiency in winning Turn Overs for his team.

McMahon has recently acknowledged that this is an aspect of the game which he needs to improve.  To that extent, although wearing the No 7 jersey for the Rebels, these numbers indicate that he is still playing more of a BSF role with Reid and C Fianga’a sharing the OSF duties.  Perhaps the Rebels are simply adhering to the Sth African numbering system?

However, to DRI/TOW should be added DRI/Penalties Forced at the breakdown by each player which result from the ball carriers getting penalised for “not releasing”.  This combination would be an improved measure of the impact of each of these players.

Unfortunately, I have no access to good/relevant Penalties Forced data and would welcome feedback as to from where this information may be readily sourced.

Podcast 208 – Blast from the past
Video: Anatomy of a try – Folau vs Stormers