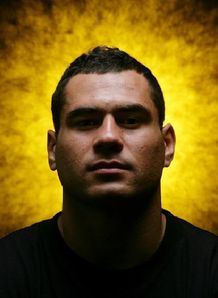 On Friday George Smith won another player’s gong, picking up the RUPA medal. Hard to argue against. He is after all the world’s best seven.

Yet again Smith churned out a tour of top class performances. For me though, what was so impressive, was the way he still managed to impose himself, despite the completely fµcked up refereeing of the breakdown we saw this (northern hemisphere) autumn.

Refs were clearly instructed to be obsessed with all players staying on their feet at the breakdown, to the exclusion of just about anything else going on.

Now I guess I can see where the idea behind this came from; we want a competition at the breakdown, not just sealed off recyclathons. I’d also love to see the end of the AB’s so called ‘counter-ruck’ which is a very poorly disguised flop over the attacking side’s ball, but I’m not getting my hopes up.

However, what we saw were ref’s needlessly pinging anyone who should dare to leave their feet at a ruck, ripping any momentum out of the game and making even the most seasoned rugby followers say “what the fµck?”. My most treasured item at live games this season was the ref-link radio earpiece, because without it you couldn’t figure out what the hell refs were constantly parping on the whistle for.

What do they expect to happen at a breakdown? Guys form a scrum in an orderly fashion? It’s now legal to pull down a maul – where do those bodies go?

I have a vivid picture in my minds eye of an occasion in the French test when Chisholm got pinged because the french guy he was bound to couldn’t take Chis’ weight and went off his feet. Chis, over our own attacking ball, unavoidably went with him and was penalised. Despite the fact that Burgess was in the act of clearing the ball anyway. FUBAR.

While this rule was being followed to the exclusion of all else, it seemed that all of a sudden it was fine for the tackled player to hang on to the ball for as long as they liked. Through any of the Wallabies games there was a sound track of Smith or team-mate standing over the ball with their hands on it shouting “Release! Release!” for an embarrassing amount of time, before the ref would eventually say “Let go gold”, or maybe even penalise them. Nuts.

What this meant was classic fetchers like Smith were all but nullified at the breakdown, compared to the interpretation that we had earlier in the same season. International coaches and players must be as confused as us as to what interpretation of the breakdown we’ll be playing next year, but well done to Smith for showing his class regardless.

Acknowledgement: Yes, this was a thinly veiled whinge at refereeing standards, but at least I didn’t mention that cnut Alan Lewis.