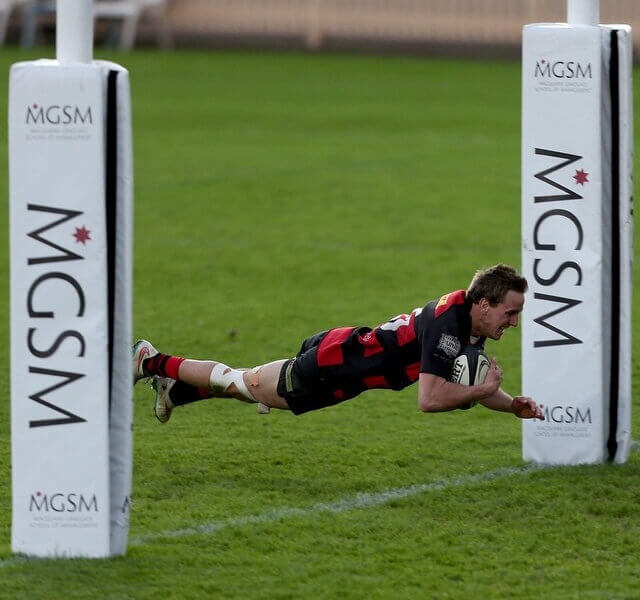 A fast paced game from the outset, Ben Volavola was the first to register a try just five minutes in to give Southern Districts an early lead.

A game-ending injury to Josh Gillard saw Tyson Davies enter the game to replace him in the seventh minute, and after a short delay the teams resumed the up-tempo end to end style match.

Warringah made several good attempts to cross the line, and were finally rewarded when David Feltscheer set up Rory O’Connor for an easy try to level the scores at five all. Fly-half Hamish Angus was unable to add the extras and the scores remained level after 22 minutes on the clock.

Volavola thwarted another Warringah attempt, and managed to gain significant territory from the turnover but failed to capitalise. A largely frustrating half of football came to a close when Warringah scored a try in the 40th minute and took a 12-5 lead at the break.

A yellow card to Souths player Godinet in the 52nd minute saw Warringah take advantage and break through for their second try of the match – scored by Holmes and again set up by David Feltscheer, ably converted by Hamish Angus, taking their lead to 14 points.

Souths put on a brilliant display on their way to what looked like a certain try, but Warringah scrambled to prevent it crossing, and emotions were running high at Forshaw Park.

A spectacular 60m run from fly-half Hamish Angus to score Warringah’s third try of the match was punishment for a Souths turnover.

Afa Pakalani scored a solid try to mitigate the scoreline pain for Souths, and Ben Volavola converted to narrow the gap to 14 points with eight minutes left to play in the match. A big run from Gibbons maintained their territory but again Warringah managed to defend.