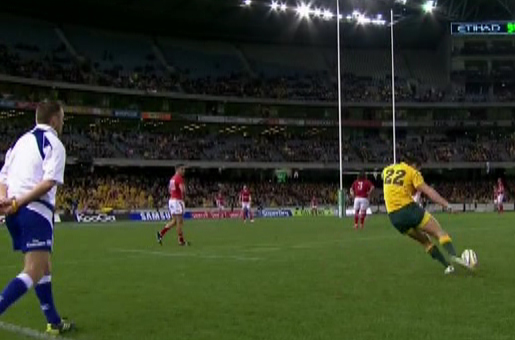 South African Referees Manager Andre Watson noted before this trial that there was a potential incentive for negative tactics by defending teams. So he moved to head off the problem:

There is a possibility that we could pay a price somewhere along the line in a bid to create more tries, but we will be having a briefing with the various Varsity Cup rugby coaches and referees in late January and we will have to up-skill everyone and we aware of the potential pitfalls.

The key, however, is that you’ll never know something until you try it. One would think this experiment would definitely lead to more tries… but you’d also imagine that a few more penalties will be conceded on purpose… The exciting part is that we’ll soon see for ourselves how this works out.

As it turns out, the results of the trial appear to have been positive. After five rounds the South African Referees Union has released statistics showing that:

There are two rounds left to play in the trial. It will be interesting to see the full results when they are released by the IRB — and then to see whether the IRB will trial such a system in a higher level competition.

But are we getting ahead of ourselves here? Is there actually anything wrong with the current points system? There may not be, but my view is that we should always look at any proposal that could improve the game — and I believe that seeing more tries could only be an improvement.

I can see both sides of the arguments for increasing the points for tries and reducing the points for penalty goals. The results of the Varsity Cup variations look positive but a trial in a professional competition, where the stakes are higher, may show different results. So I’m undecided on those questions.

What I am sure of is that the points for a field goal shouldn’t be reduced. I can hear Peter Slattery groaning as all those fluffy puppies he’s looking out for die every time another field goal is kicked, but I think there’s a lot more skill involved in a field goal than a penalty goal. You shoot for a penalty goal by kicking off a tee without the opposition charging at you, but you attempt a field goal under variable conditions, including whether your team is skilful enough to get you into the best position to take the attempt, whether the pass you receive is a good one or not, how the ball bounces before you kick it, and usually under enormous pressure as opposition tacklers charge at you. No matter how much pain it caused me at the time (and every time I see it again), that field goal from Johnny Wilkinson to win the 2003 World Cup Final was something special. Similarly, Stephen Larkham’s field goal to win the 1999 World Cup Semi-Final against South Africa thoroughly deserved 3 points.

If we decide that the points system should be changed to encourage more tries, there are numerous ways it could be done — but there is another interesting consequence to consider. The idea behind encouraging more tries is to make the game more of a spectacle. However, the more tries scored in a game, the less time the ball is in play — and that does not enhance the spectators’ experience.

Earlier this year I published my statistics showing that in all Wallabies games in 2011 the ball was in the possession of both teams for an average of only 30 minutes and 22 seconds per game — click here to view that article.

I also looked at the causes for the time the ball wasn’t in play. The cause of the largest time lost for each event was tries scored, at an average of 2 minutes (which includes delays for a try celebration, the conversion attempt and the subsequent kick-off). Over the next season the IRB is trialling a law variation in all competitions: a kicker must attempt the conversion within ninety seconds of the try being awarded. Given the other delay factors, I don’t see much time being recovered there from those lost two minutes.

Of course, seeing an extra couple of tries being scored in a game might feel like adequate compensation for losing 4 more minutes of ball-in-play, but wouldn’t it be good to come up with a solution that addressed both the desire for more tries and the desire for more actual rugby?

Here’s my suggestion for a tweak to the scoring system that may achieve those twin goals:

It’s simple. It should encourage teams to go for more tries, particularly as it would no longer matter whether you score in the corner or under the posts — you’d get 7 points regardless. It also maintains the 3-point penalty goal as a deterrent against defensive infringements.

Moreover, it would also increase the amount of time the ball is in play: a try is awarded, and then both teams return to halfway for the restart. You’d add in a minimum time before the kick-off could be taken (say twenty seconds), but if the team that just scored takes too much time celebrating and doesn’t quickly get in position to receive the ball, the other team could restart at the ref’s signal and make them pay for their indulgence.

The value of a good goal-kicker would also be maintained, as shots for 3-point penalty goals would still be a genuine tactical option.

One negative would be less time for broadcasters to replay the try while the commentators babble on, or to try to squeeze in another ad break.