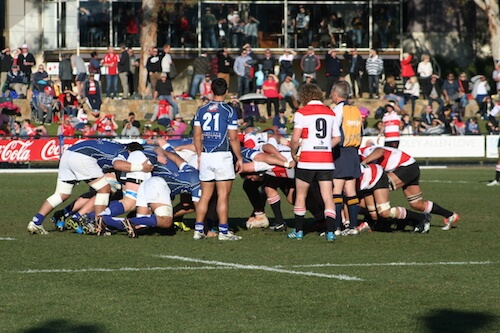 Royals have broken a 24 year title drought with a dramatic 21-17 after the siren win over the Vikings in the Grand Final. A try to fullback Ben Johnston sealed the win in a see sawing affair with the lead changing numerous times .

Royals were first on the board through a penalty goal to Craig McMahon after all the early possession.

The Vikings then had their chances but the Royals defence was able sustain the pressure on numerous occasions and keep the Vikings at bay.

The Vikings backline that included the like of Frankie Fainifo, Nigel Ah Wong and Christian Lealiifano were unable to capitalise on a number of line breaks with the Royals scrambling defence keeping them in front.

As the half wore on neither team could get on top, however, the Vikings went the closest scoring next after they swooped on a kick that was lost by the retreating Royals defender but they were called back for a forward pass.

Just before the half time break, the Vikings had a series of attacking scrums right on the Royals line but once again the Royals defence held, bundling Jarrad Butler into touch to leave the score at 3-0.

The half time talk from Vikings coach Brad Harris must have worked as the Vkings took just two minutes to score their first points of the game with a try to Christian Lealiifano off a nice run down the left wing from Jake Knight. Lealiifano converted his own try to make it 7-3.

Royals closed the gap to one point just minutes later as McMahon landed his second penalty goal of the game.

Royals centre Jason Swain ran a great line to hit open space but found himself without support and grubbered ahead and the Vikings regathered the ball.

With the momentum swinging back in Royals favour, Vikings flanker Rowan Perry found himself in the bin after dragging down a Royals jumper at the lineout from an earlier penalty.

In that ten minute period Royals made them pay after winger Lausii Taliauli found a gap and grubbered out to Jason Swain on the wing, who collected the ball and beat the defender to score their first try and put Royals back in front 11-7.

But the lead would change again and despite being a man down, the Vikings hit back with a try in the right corner to Jerome Niumata that was converted by Lealiifano from the sideline to make it 14-11.

With the game entering the final ten minutes, Royals hit the lead again with prop Jay Cash barging over from close range to restore Royals lead at 16-14.

With only four minutes to go, Vikings received a penalty and up stepped Lealiifano and showed his nerve to land the kick in front of the Royals fans to put Vikings back in front 17-16.

But like the demtel ads, there was more as Royals fullback Ben Johnston, in his 100th game, sliced through the defence to score the winning try to send the Royals fans onto the field to celebrate the end of a 24 year title drought.