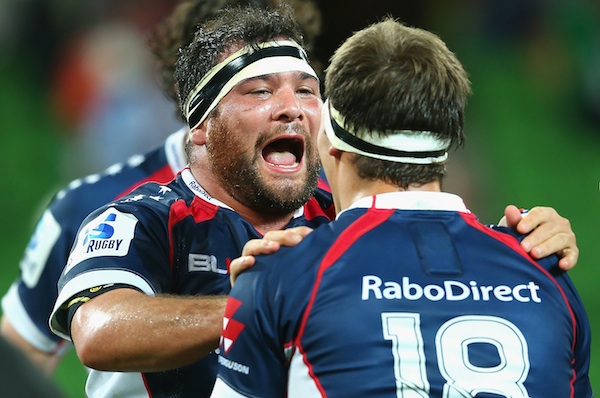 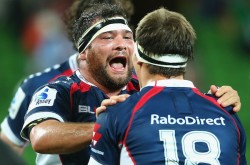 An undermanned Melbourne Rebels outfit ticked a few boxes on their way to a 30-21 win over the Stormers last night at AAMI Park.

After three years, they finally saluted against a South African opponent. A feat they accomplished by – for the first time – playing eighty minutes of solid rugby.

It has been a hard month for the AAMI Park faithful, seeing snippets of promise cancelled out by poor starts, inauspicious finishes, and rookie mistakes. All through this time, the Rebels have claimed to be almost there, one or two steps away from becoming a challenger.

On Friday night, they took those final steps. Whilst some might point to the late penalty try as the clincher for the home team, the truth is that, against a superior opponent with their own demons to banish, the Rebels would simply not allow themselves to be defeated.

Rebels coach Damien Hill spoke at a sponsor’s event before the game about the Rebels’ poor starts in their heartbreaking last month, and how that had been a main focus in their preparation for this match. The team could ill afford to give the Stormers the leg up that they had provided the Chiefs and Blues in previous weeks.

Start well, they did. Jason Woodward converted a 5th minute penalty for a Stormers scrum infringement, and in the 13th minute, thanks to some fantastic passing from Nic Stirzaker and a break through Jarrod Saffy, Scott Higginbotham stretched the ball over the line to score the first try of the match. Woodward converted for a 10-0 lead after 15.

The Rebels were controlling play, but all the same, were guilty of the same silly mistakes as in weeks prior. The Stormers made them pay soon enough, with a scrum deep in the Rebels’ half being taken by Louis Schreuder, who was tackled by Stirzaker but not held, allowing him to roll forward and run the ball underneath the posts. Converted, it was 10-7 after 16.

It was an absurdly physical contest given the teams playing, scrums becoming a haven for players to receive treatment. The tight forwards especially were dropping like flies.

The Stormers gained some momentum and made a run. From Elton Jantjies, the ball found Eben Etzebeth who breaks a tackle and found Bryan Habana on the outside, who, even now, is far too quick for most rugby players. The conversion was successful and the Stormers took the lead, 14-10 after 28.

The Rebels looked to have regained the lead shortly after, with Bryce Hegarty engineering a brilliant play through Lachlan Mitchell to send Cadeyrn Neville over. He was, however, pinged by the referee for playing the ball on the ground. Replays showed it to be a 50/50 call, but likely a fair one as he did look to have dropped to his knees in the tackle.

The Stormers were playing the clock down towards the end of the half, and were penalised for it with two minutes to go, Scott Higginbotham pointing at the posts.

In one of the greatest non-moves in rugby union’s proud history, Jason Woodward ‘shanked’ the kick into the path of Lachlan Mitchell on the unguarded left wing for a shot at a try. The referee couldn’t see the innovative nature of the play, and forced the Rebels to take a ‘genuine’ shot at goal. Woodward made no mistake, the half ending 14-13 in favour of the visitors.

An impressive Nic Stirzaker was replaced at half-time by Nick Phipps, who initially did well before falconing Jason Woodward in the 45th minute, turning the ball over. He trailled off after that.

The Stormers, meanwhile, were – in distinctly un-Stormers-like fashion – turning down kickable penalties to have a shot at the line. Whether this was confidence in their own ability, or a lack of confidence in the Rebels’, was left unanswered.

The Rebels were doing a fantastic job of absorbing the pressure the Stormers were putting on their line, and regained the ball 10 minutes into the half. The Rebels were given a penalty, Woodward kicked for the line and this time offered a legitimate shank, not getting the ball past half way. The Rebels worked the ball through the big men, Inman, Higginbotham and Pyle all working hard, and importantly, moving forward every time. Bryce Hegarty proved the lynch-pin again, the former Brisbane Bronco finding Pyle, who scored the try. Woodward converted and the Rebels regained the lead, 20-14 after 54.

The Stormers pushed back, and though the Rebels defence was holding as best it could, found the ball in their attacking 22. From a lineout, the visitors did a brilliant job of sending the Rebels line wide before bringing the ball back in to Habana, who took it within 5 metres of the line. The loose ball from the tackle found Etzebeth, who flung it to Andries Bekker for a try in the corner. A wide (but not as wide as it should have been) conversion was slotted by Joe Pietersen, the Stormers regained the lead, 21-20 on the hour.

Hugh Pyle was the match-turner for the Rebels – in the space of ten minutes he had legally defended a maul and got the turnover, and taken the clearance lineout against the throw.

The Stormers were looking to push the Rebels back, and the game was getting scrappy. The Rebels had the ball and were hitting it up but not making any ground. Bryce Hegarty tried a kick into the in-goal, but it proved too long and was touched down for a 22m dropout. Kimami Situati was seeing a lot of the ball, and had managed to get the backline far more organised. He sent it to Higginbotham who was stripped of it, the loose ball kicked forward by Phipps, who was held back by Siya Kolisi from a one-out contest with Bryan Habana and the line. The referee sent it to the TMO, who awarded the penalty try to the roar of the home crowd. Woodward converted, and the Rebels led 27-21 with minutes to go.

The Stormers threw everything they could at the Rebels in the dying minutes to rescue the game, but when Jason Woodward converted a penalty with two minutes to go, it was out of their reach.

At the whistle, the team and crowd rejoiced like they had won a final. Though that may be some years away, this win was all too significant.

Not just for a debut win against a team from the Republic, but for a much-needed win over their critics, and over their own doubts.

Hugh Pyle‘s strong turn past the hour gave the Rebels the spark they needed to continue fighting out the game, especially when the Stormers had taken the lead. His skill and leadership on the pitch is really quite something for a player that young.

Scott Higginbotham should be the first name out of the hat at tomorrow’s Wallabies selection. His performance as captain of the Rebels has stamped him as one of Australia’s best current players.

Hugh Pyle must surely be a smoky for selection tomorrow. Very rarely do you see a player who can have as great a physical impact on the game as he can.