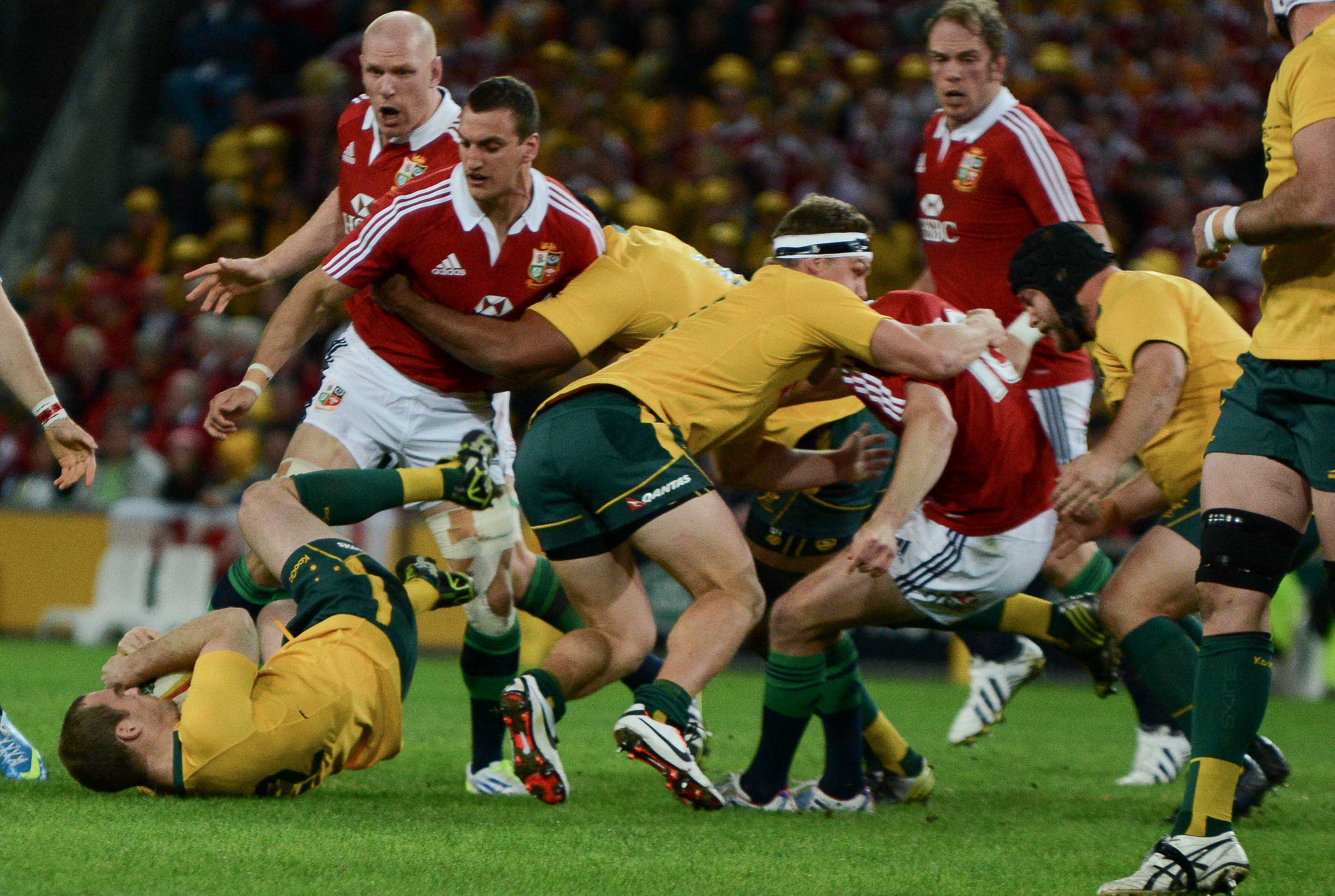 The British and Irish Lions arrived in Suncorp for the first Test, hoping to avenge their upset loss during the 2001 Australian series. A number of missed opportunities from Wallaby kickers and a series of unlucky backline injuries were almost overcome in the dying minutes. Unfortunately it was not to be as the Wallabies lost the opening test 23-21 despite a spirited performance.

After a terrific build-up to the match, Christian Leali’ifano suffered an apparent concussion, prompting Robbie Deans to bring on the hard-running, but relatively limited, Pat McCabe.

Following an ill-advised cross-field kick, Australia were on the attack, camped in Lions territory. Brian O’Driscoll was penalised twice in a number of minutes for not supporting his weight at the breakdown. Unfortunately, O’Connor missed both penalty opportunities, which was probably a deciding factor in the game given Leigh Halfpenny’s almost perfect kicking form.

A massive first scrum from the Lions put the Wallabies pack on skates, earned a penalty and valuable field position early in the game.

After the Lions held the the ball for multiple phases, the Wallabies earned themselves a turnover and Will Genia sets off with a quick tap. After 10 seconds of individual brilliance, the Wallabies opened the scoring with a try to Israel Folau. Genia caught the touring side napping and stepped past a number of defenders, put in a tremendous grubber which was seized upon by Folau who ran the final 35 metres untouched to open the scoring. 7-0 Wallabies.

A great passage of play, with a great half-break by twinkle-toes Benn Robinson and some hard running by Folau was stalled by a collapsed maul inside the opposition 22. The Wallabies looking sharp, consistently getting over the breakdown and recycling quick ball despite minimal numbers devoted to the breakdown.

James Horwill conceded a penalty 22 minutes in for joining the Lions’ shortened maul from the side. It was an easy conversion from Halfpenny inside the Wallabies 40m. 7-3 Wallabies 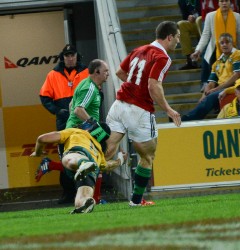 George North broke through a completely disjointed defensive line after a nothing kick by Berrick Barnes. Continuing his brilliant form on tour, North easily sidestepped Barnes and gassed the oncoming cover defence to put the Lions ahead 10-7.

The Lions took advantage of the swing in momentum through a well-weighted Jonathan Sexton chip and regather, followed by an accurate Davies kick into the Wallabies corner, with Will Genia forced to run the ball into touch. North unlucky not to have a double to his name, powering over Genia who gave the Welshman his outside shoulder despite having two players inside him. North was denied by centimetres and Halfpenny converted a penalty soon after. 13-7 Lions.

Isreal Folau more than justified his selection, scoring a tremendous second try. Folau had previously given the Wallabies great field position after flying above the pack to take a midfield bomb. After given a bit of space, Folau stepped inside one, palmed off another and sped away from Halfpenny to score his second. O’Connor missed yet another place kick. 13-12 Lions

Some dubious defence from the Wallabies allowed prop Corbisiero to break the line after not being held in the tackle. Great hands on ensuing front-foot ball by O’Driscoll led the Lions inside the Wallabies 5 metre. The scrambling Wallabies gave away a penalty for not staying on their feet on the counter-ruck. Amazingly Halfpenny missed the conversion and the game was 13-12 to the Lions heading into halftime.

The second half started quickly, with the Wallabies finally getting the better of the opening exchanges with some great wide shifts and a lucky regather from a partial charge-down.

Incredibly, another back is stretchered off as Pat McCabe succumbbed to injury. The Wallabies scrambled to cover positions with Michael Hooper pushed into the backline and Liam Gill brought off the bench.

The Lions utilised an intricate backline attack to target Hooper, with Alex Cuthbert breaking through the line and subsequently three Australian tacklers to score. 20-12 Lions.

Luckily for the Wallabies, O’Connor converted a penalty after a breakdown infraction from the Lions off the kickoff. Lions 20-15. 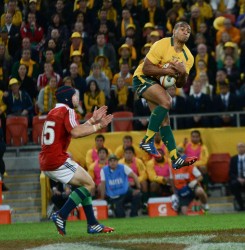 After a sloppy period of play, the Lions conceded a ruck penalty and Kurtley Beale stepped up to convert and take the score to 20-18 Lions.

Soon after, the Wallabies also conceded a penalty within range with the attempt converted by Halfpenny. The Lions were then given great field-position by another terrific chip and chase by Sexton. Lions 23-18.

Kurtley Beale then made a scything break, stepping past two would-be Lions defenders and racing into open space. The Wallabies were rewarded with a penalty well inside Lions territory, converted by Beale to close the gap. 23-21 Lions.

After the Wallabies bungled a Sexton bomb inside their 22, the Lions were back on the attack with a centrefield scrum. An unprecedented scrum turnover and another amazing display of athleticism by Folau to regather Genia’s kick relieved a considerable period of pressure.

After a strong scrum by the Wallabies, the Lions were penalised for entering the ruck from the side. Beale then pushed a high pressure kick wide to the right.

The Wallabies pack showed incredible heart late in the game, splintering the Lions in the final scrum. Beale was given another chance to win but slipped and the kick went wide. The Lions held in to win the first Test 23-21.

After such a close hard-fought affair, the game deserved to be decided in the final moments. Unfortunately for the Wallabies, the game changers were a pair of missed penalties in the dying moments of the match

A definite stand-out performance by George North. Dominant throughout, showed great footwork, power and speed. From the Wallabies, Israel Folau was tremendous in his debut. Notable mentions to Genia for his own individual pieces of brilliance and Benn Robinson.

Obviously availability for the next Test will be influenced by the substantial injuries suffered tonight. Sub-standard performance by JOC, the five-eighth position will definitely be a point of concern for Deans.

James Horwill has been cited for allegedly stamping on Lions lock Alun-Wyn Jones.