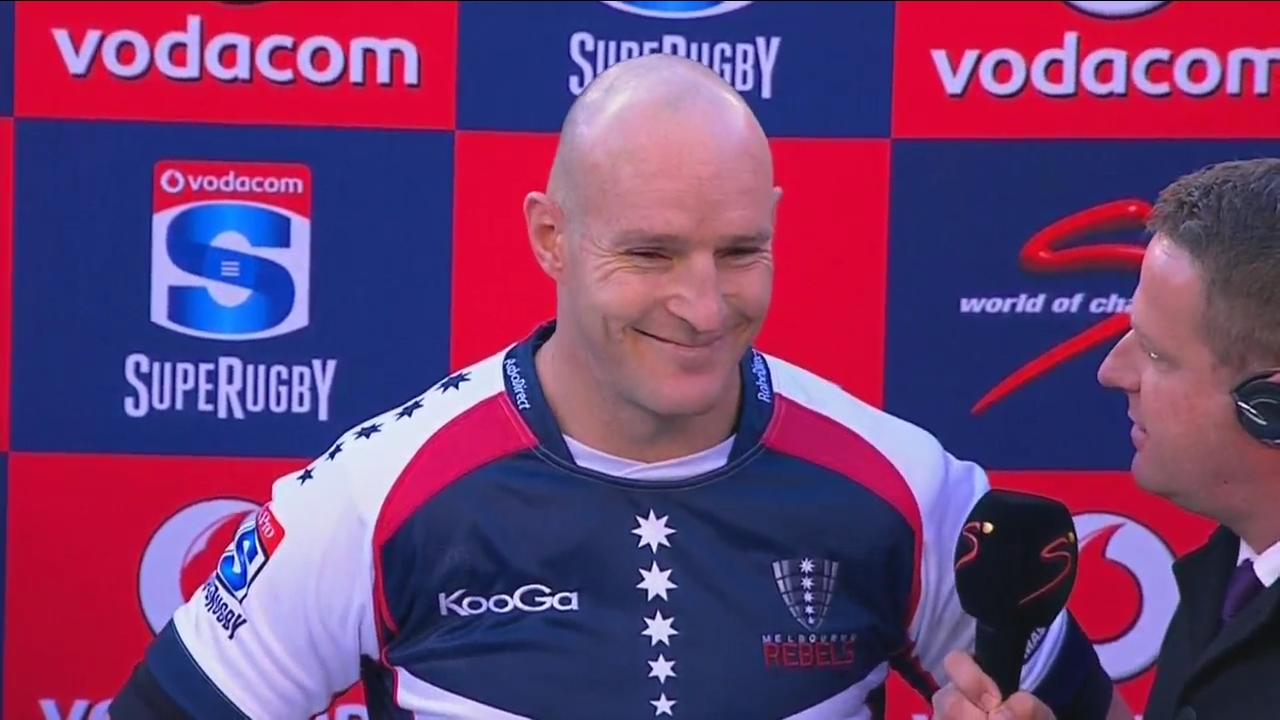 The Stormers finished the Super Rugby season on top of the table with a 26-21 win against the Melbourne Rebels overnight. They were, however, made to work for it by a Victorian team who tried everything to send captain Stirling Mortlock out a winner.

As the sole Melbourne correspondent amongst the GAGR alumni, and one of few in the ‘professional’ realm, I see it as my duty to occasionally put balanced reporting aside in order to pump up the Rebels’ tyres a bit. Therefore, I have written about how impressed I have been with several performances this year, whether or not they resulted in wins, because I can see how critical those performances are to the team’s development.

Forget all of that, because this, my friends, was not only my favourite Rebels match to watch, but will sit as one of their formative performances as they move on to bigger and better things. You see, nobody had given the visitors much of a chance to get close to the rampaging Stormers, whose textbook defence had seen away bigger threats than the Rebels with relative ease.

Indeed, it looked like history repeating for the hosts early in the match, with hooker-cum-breakaway Deon Fourie having an immediate impact from kick-off, earning a penalty. The Stormers got to within five metres of the line from another penalty advantage, and would have touched down if not for a handling error. When the penalty was called back, the hosts pointed to the sticks, and Peter Grant made no mistake for a 3-0 lead.

The Rebels managed a few minutes of attack but ceded to the Stormers again. Jono Owen conceded a penalty at the breakdown and Grant lined up again. He was successful and the hosts had a 6-0 lead after 8 minutes.

The Rebels were shaken, but by no means out of the match, and, as against the Lions last week, would have had more success if not for simple errors at lineouts and when running with the ball. They had started to run into some momentum when Bryan Habana received the ball from a break and rocketed over the line. The referee sent it upstairs to check the grounding and found that Habana had not grounded it correctly. The Stormers had a second chance through a penalty for not releasing, and Juan de Jongh snuck through the defence for the first try of the match. Peter Grant added the conversion and the hosts were out to a 14-0 lead.

Here’s where my point of why this was a watershed moment for the Rebels starts to crystallise. Towards the end of the half the visitors had their fair share of chances to kick for points. They took none of them, each time deciding to kick for position and attack the line. It was the kind of ruthless, back-yourself-in attack that the Rebels should have done more of this year, if only to build some confidence in their own abilities.

This strategy was initially fruitless, the Stormers defence proving too tight for even the best Rebel attack. The hosts rubbed some extra salt in the wound after the half time siren, Peter Grant slotting his third penalty and giving the Stormers a 16-0 lead at the half.

The Rebels continued their stuff-it-let’s-have-some-fun strategy in the second half, and started to see the results immediately. They made huge ground immediately through a darting Lachlan Mitchell, and controlled the ball brilliantly in the next phase with a maul, earning a penalty from a Stormers transgression in the process.

The Rebels kicked for touch and won the lineout. Hugh Pyle came off the maul and reached for the line, falling just short. Rodney Blake received next and made no mistake, putting the ball down for the visitors’ first try. Julian Huxley converted and the score was 16-7.

Minutes later, the little club that just might silenced Newlands, with the Rebels on the attack immediately and quickly found themselves within five metres of the line. Nick Phipps recovered the ball from a ruck and performed a feat rarely seen this season: easily finding a gap in the Stormers’ line. With his try the visitors had two majors in four minutes, and with Julian Huxley’s conversion, the Rebels were within two points of the ladder leaders, 16-14.

The Stormers would not be treated this way on their home turf for long, it seemed, as Habana regained the ball from the restart and the hosts hammered the Rebel line. They wore down the visitors and eventually found the line when Juan de Jongh crossed for his second. Grant added the conversion and put the lead back out to nine points, 23-14.

The Stormers held the ascendancy until the last ten minutes, when replacement Rebels scrumhalf Nic Stirzaker broke the line and popped a pass to James Hilgendorf. The stand-in number 10 floated a pass to Cooper Vuna who put the ball down in the corner for the Rebels’ third try. Julian Huxley converted and gave the Rebels the unlikeliest of sniffs at 23-21, two points down with just minutes to go.

The hosts turned up the pressure late in the game, looking to seal a win that should never have been in doubt. De Jongh came close to getting a hat-trick but his run ended short of the line. After a few phases in penalty advantage, the Stormers looked to have driven their captain over the line, but it was referred to the TMO. Five camera angles later it seemed that while Mark Gerrard’s tackle may not have definitely saved the try, it had certainly obscured the vision enough to cast doubt in the TMO’s mind.

The home team took the kick at the penalty’s callback and Grant kicked his fourth, extending their margin to five, where it would stay.

It was a great game, bookmarked by the skill and showmanship of the Stormers, and the guts and resilience of the Rebels, but the highlight for me was the efforts the Stormers went to after the match to congratulate Stirling Mortlock, including presenting him with a signed No. 12 Stormers jersey — a gesture that smacked of class.

Stirling may not have been sent out a winner, but considering the effort his Rebels put in, and the potential they showed against the benchmark in the competition, he would have said goodbye a very proud man.

What did you think of this match? Was it the stumble the Stormers had to have? What are the Rebels building to?