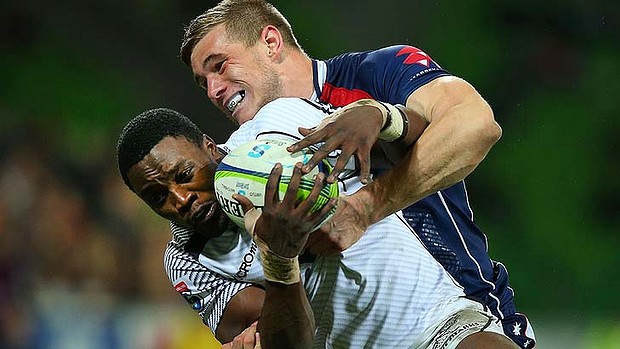 Diabolical refereeing and a failure to capitalise on possession cost the Melbourne Rebels a memorable victory against the ladder-leading Sharks, going down 22-16 at AAMI Park Friday.

The Rebels were returning from a bye after scoring their third win for the season against the Western Force on Good Friday. The Sharks were beginning their tour of Australia and New Zealand after their domestic form, save for a shock loss to the Highlanders last round, had taken them to the top of the Super Rugby table.

The start looked ominous for the Rebels, with the first attacking chance from the visitors taking just two minutes to arrive. Sharks fullback Lwazi Mvovo kicked for JP Pietersen on the left wing, who collected and returned the action to a running Mvovo bolting for the Rebels’ line. He was chased down by Bryce Hegarty, who slapped the ball out of play as Mvovo was about to capitalise. Referee Andrew Lees pinged Hegarty, and went upstairs to see if there was any recourse for a penalty try to the visitors, and after confirming there was not, awarded a penalty to the Sharks, who, thankfully for the hosts, could not convert from the next play.

It would be the Rebels who opened the scoring after 20 minutes, with Jason Woodward the architect of a blistering linebreak to get the home team into an attacking position, and the scorer when the Rebels took the kick after Tendai Mtawarira was caught offside at the ruck. The Rebels led 3-0 after the opening 20.

The Sharks took all of one minute to respond, gaining a shot at the goals when Mitch Inman was called for obstruction at the kick return. Francois Steyn converted to even the scores after 21 minutes. They took the lead minutes later, when Cruze Ah-Nau was caught offside at the breakdown and Steyn awarded another kick at the posts. He took the gift to make the scores 6-3 after 27.

At the half hour mark, both teams had added one further penalty to their tally, as Woodward scored a penalty awarded through Ryan Kankowski being caught offside, and Pietersen returned the favour when Scott Higginbotham didn’t release the ball in a tackle.

The impetus was on the Rebels, who were leading every statistic bar the scoreboard, to put together an attacking play, and they should have been rewarded when Tom English broke the line and sent Colby Fainga’a perilously close to the in-goal. The Sharks recovered the ball, but faltered as the Rebels piled on the pressure, blatantly passing the ball forward as they were camped 5m out from their own line. To the crowd’s horror, referee Andrew Lees missed the call that would have awarded the Rebels a try opportunity straight in front, and the Sharks escaped unharmed.

Rubbing salt into the wound, the Sharks would go into half time on the back of two more penalties, as Steyn converted consecutive opportunities given to him by Male Sau for a lifting tackle, and Mitch Inman for hands in the ruck. A bemused crowd saw their Rebels, who had dominated proceedings thus far, run off the pitch down 15-6.

The teams came out for the second half, and the crowd were pleading with the Rebels to run the ball, having seen some impressive breaks from the hosts towards the end of the first. Male Sau had the only real opportunity of the first ten minutes of the second, with a break down the right wing of AAMI Park, and after a while the teams began to trade kicks once more.

Fifteen minutes in, the Rebels would be awarded the first scoring opportunity of the half, when Charl McLeod was caught offside. Jason Woodward converted the penalty and reduced the margin to six, the Rebels down 15-9 after 55.

The Rebels had the Sharks stuck in their own 22 for most of the third quarter of the match, but it would amount to nothing when Francois Steyn broke through on the left to send the Sharks running. Passing to Lwazi Mvovo, the visitors were in their attacking 22 when Mvovo looked to sling the ball forward to JP Pietersen, who ended the break under the posts. Andrew Lees refused the pleas of the Rebels and their fans to refer the decision to the TMO, not even hesitating to consult his assistants before awarding the Sharks the first try of the match. The disdain from the Melbourne crowd drowned out the successful conversion, giving the Sharks a 22-9 lead after 68 minutes.

The Rebels were down, but not out, and immediately began running the ball at the Sharks in the hope of getting back in the match. It wasn’t long until the Rebels again had the Sharks trapped in their own 22, and when the visitors were pinged for collapsing a maul that was heading for the line, the hosts chose to waste no time. Bryce Hegarty took the quick tap and sent a spiral wide into the arms of Pat Leafa, who bustled through the remains of the defence to score in the corner. Jason Woodward scored the tight conversion, and took the score to 22-16 with eight minutes remaining.

The crowd was up and about, and so too were the Rebels, as they made a final attempt to wrest an unlikely but deserved win. Jannie du Plessis was caught offside at the return and the Rebels chose to run, Sean McMahon, then Jason Woodward breaking through the line to send the hosts close. The ball was bogged down in the resulting breakdown, with four Sharks players and two Rebels in amongst the scrap. Somehow, Andrew Lees picked out Scott Higginbotham as the sole guilty party, denying the Rebels the chance at victory, and consigning this match to the so-close-yet-so-far heap that has become the Rebels’ season.

Andrew Lees. Everyone has a bad day at the office, but the man in orange was particularly average this evening. The Rebels should know that you cannot rely on a referee to win you games, and that is not to forgive their basic inability to capitalise on possession, but on a night when each poor decision led to an opposition score, improvement arguably may not have made much difference.

Luke Jones was again terrific in the forwards. He is the form second rower in Australia, and coincidentally, his form has catapulted since the announcement of his teammate Hugh Pyle’s move to Europe.

Scott Higginbotham’s discipline is something to keep tabs on. While he has been duly praised for his on-field leadership, the amount of penalties he’s conceding around breakdowns shows he may not be leading by example.

This is the third consecutive match involving the Melbourne Rebels to have a 22-16 scoreline.

Blues v Reds: Reds get blues
INDEPTH: Who should be the 18th Super Rugby team?