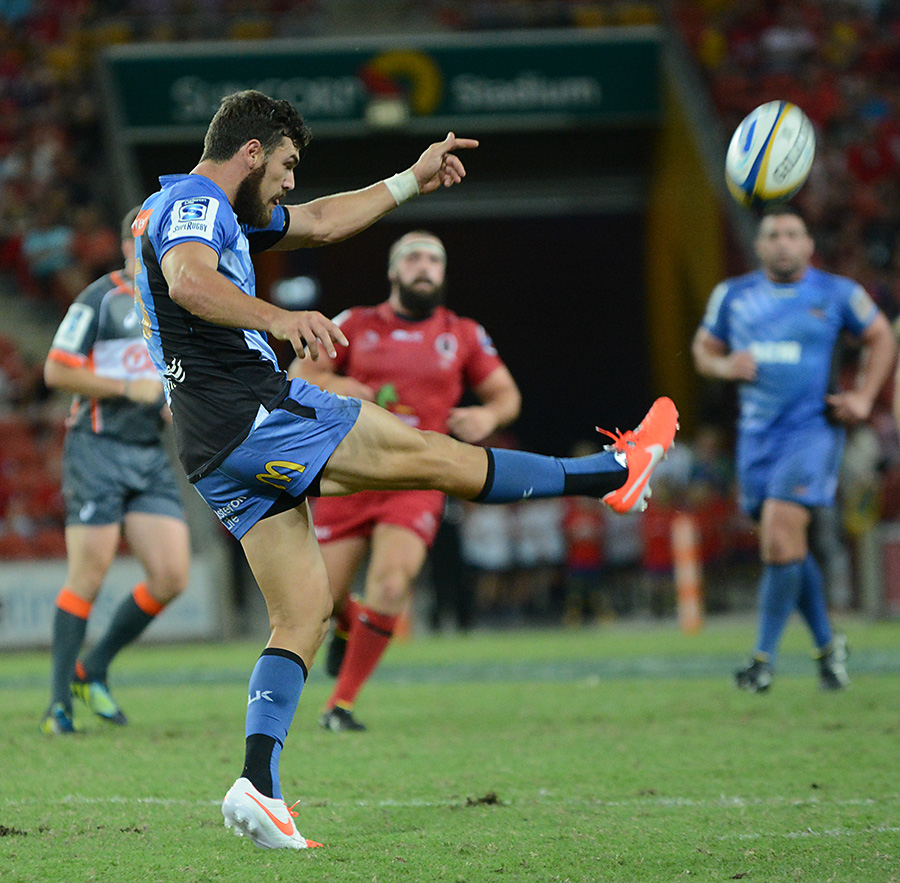 The Western Force have kept their finals hopes alive tonight with a win against the Reds in Perth.

It wasn’t an Australian derby for the ages, this game. There were skill errors, niggle, outright foul play and many penalties at the breakdown, as well as some baffling refereeing at times. To the credit of the Force they started the game a lot better than last weeks debacle against the Blues. In spite of giving away an early three points, they seemed a lot more switched on out there tonight. Nearly everything they should have done and didn’t last week they managed to do to varying degrees in this game. Admittedly the opposition weren’t on fire like the Blues were, but there was a greater focus and intent than we witnessed last Saturday night.

This was evidenced when the first try of the game came from (who else) The Badge. Several phases of solid lead up work from the Force pack, where they were consistently able to get over the gain line, presented an opportunity near the Reds line and big Sam Wykes (who had a super game) threw a great flat ball to Cummins and put him over in the corner. It was exactly what the doctor ordered for the home side, because getting in front early and settling the nerves with so much at stake tonight was very important.

A short time later the news got even better for the hosts, when an outside break from Chris Tuatara-Morrison again found Cummins and his run up the side line set up firstly Wykes and then Ben McCalman who edged his way over the line to ground the ball. Hayward duly converted and the home side were up 17-3 and looking pretty good to be fair. The Reds were hesitant in defence and infringing at the breakdown to try and stop the quick ball the Force were getting. They were under the pump and reverting to the type of play that has seen them struggle this season.

The Force were hard up against the Reds line again when there was a turning point in the game. The home side were penalised for sealing off after one too many pick and drives. Right after that Hugh McMenimen rather stupidly dropped his knees into Ben Lucas and found himself in the bin for ten minutes. He’s actually a bit lucky he didn’t get a straight red card, because the ref would arguably have been justified in reaching for it. It was actually pretty symptomatic of a string of hand bag incidents and general niggle, with the Force being the worst offenders.

The Reds got themselves back into the game with the man advantage with a try in the last few minutes of the half. A midfield break from stand out centre Samu Kerevi led to a penalty and he again featured from the line out that followed and swept aside some weak tackling to score. So at half time it was still very much a live game, in spite of the Reds not playing that well and the Force not taking full advantage.

The second half saw the visitors come even more into the game, with Kerevi wreaking havoc with a mixture of pace, skill and power. The Force really had no answer to him all night and he was a constant threat. His opposite number in Marcel Brache eventually came off looking pretty crook after trying to tackle him and coming off second best. What also didn’t help the home side was missing two very kickable penalties, which would have kept the Reds at arms length.

The Force really seemed to shut up shop and got really conservative far too early in the game. You always give your opposition a sniff in these situations and certainly the Reds could sense they were still in the contest. That they didn’t go past the home side after drawing level is probably the story of their season. Certainly the Force had stopped and needed to wake up pretty quickly if they wanted to keep their season alive. Fortunately for them they did and finished the stronger. Dane Haylett-Petty (who had a much improved game this week) flicked an inside ball from a half break to Nathan Charles, who charged over late in the game to put it beyond doubt.

So in the wash up the Force did enough (just) to keep their season alive and front up in Canberra next week for a virtual grand final against the Ponies. There is also the small matter of the Blues and Chiefs as well, though they play each other next week and the Bulls are still a mathematical chance too. For the Australian teams it’s pretty simple: win and by as much as you can to bag that bonus point. It should be enough no matter what else happens.

Like last week but in reverse: the first few minutes. The Force got on the front foot early and (nearly) never looked back.

Samu Kerevi for mine. He had a ripper game and was a constant threat.

Ben McCalman and Rob Simmons had good games, though Simmons needs to cut out the hand bag stuff. Same for Nathan Charles, who had a fairly below par game.

The Brown Hornet, or TBH for short, is a rugby tragic from way back. It's hard not to be with rugby union being the greatest game on Earth. Growing up in the Southern states of Australia, it has often felt like exile, but the entry of the Force and then the Rebels has made union increasingly feel like a code that includes all of Australia now. I remain an ardent Force fan, but one without too much bias I hope.