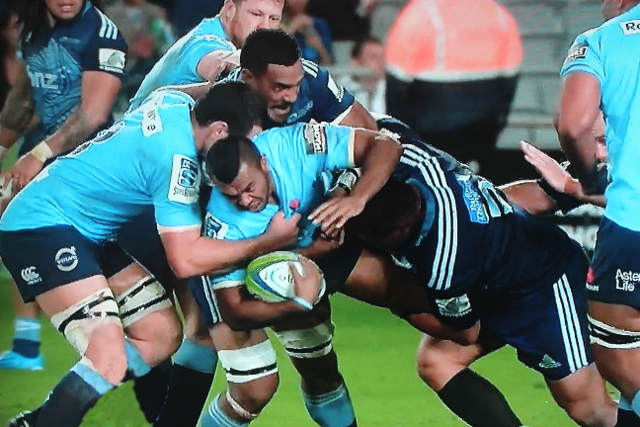 The Eden Park hoodoo struck again with the Blues beating the Waratahs 21-13.

It was a huge game, with the season outcome on the line. The Blues had to win to re-establish their season after two bad games. The Waratahs needed to win to stay in the race for the top two.

It was a great game to watch because of the intensity of the confrontation and both teams positive play; both teams putting in a huge effort. Jerome Kaino was back to his 2012 world’s best form. The Waratah’s handling skills let them down too many times to count.

The Waratahs got off to a non-flyer with a disallowed try to Horne very early.The early penalties were going to the Blues, 4-0 up before the Waratahs got a couple. Hickey kicked one and missed one and Foley missed a good chance.

Horrible 50-50 turnovers were killing the Waratahs momentum, Kepu’s knock-on the worst example. The back and forth in the midfield was great to watch and Visinia scored in the corner off a couple of magic Nonu moments.

The second half started with a Blues penalty to take the score to 11-3. At this stage the Waratahs scrum was totally dominant, the Blues were collapsing to save the ball and referee Pollock was allowing play to go on. Good for the spectators but not a very fair outcome.

There was a lot of great play by both sides and then the turning point. Foley got in the clear, put a great kick to Crawford with the tryline open, the ball took a wicked bounce and two passes later the Blues were in for the try. 18-3.

Credit to the Waratahs they did not give up. They continued to apply pressure on the Blues and after a long period of dominance, a huge maul that stopped just a couple of metres short, some great attack and Potgieter finally dived in to score. 18-10. After continued pressure, on 68 minutes the Waratahs finally got a scrum penalty to get back to 18-13 and game on.

Then the second turning point. McKibbin, who had just come on for Phipps, did a disastrous box kick that left all the Waratahs forwards offside. Hickey kicked the penalty to stretch the lead to eight points.

At last the Tahs got a scrum penalty 45 metres out and Foley stepped up, but it was beyond his accurate range. It should have gone to Beale, who has been very accurate from distance this year. The match played out till the 82 minute with the Waratahs desperate to get a score and bonus point, but no luck.

It was a very even, very tough and very exciting match. The Blues won it because they made fewer handling errors than the Waratahs and got the bounce of the ball. Cheika will have to change game plan and insist that miracle passes are taken out of it. Going to ground and recycling on attack has to become the norm!

The Blues are back in the race and the Waratahs lost a golden chance to progress and must now win some away matches plus all their home games if they are to get to the top of the conference.

The bounce of the ball did not help the Waratahs all night. A great kick by Foley for Crawford took a wicked bounce. What looked like a seven point runaway for the Waratahs turned into a good try to the Blues. A fourteen point turnaround plus the momentum the Waratahs were on at that stage would have changed the outcome. But, not to be.

Jerome Kaino for the Blues caused havoc every time he got near the ball and was overall MotM. The Waratahs MotM was Adam Ashley-Cooper; Hooper and Potgieter were very good for the Waratahs.