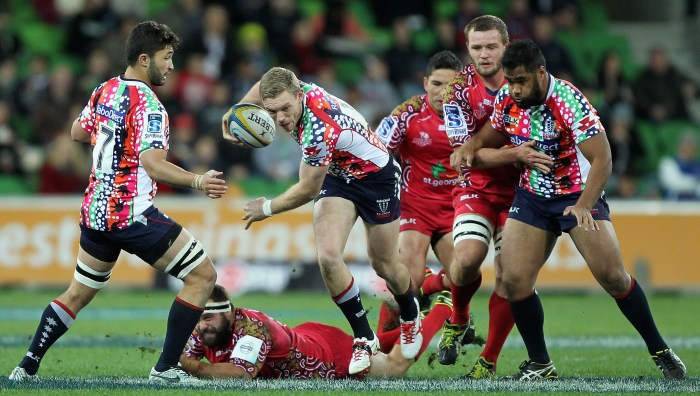 The Queensland Reds made an awful Melbourne Friday night even more so for the Rebels, a four-try first half setting up a 36-20 win at AAMI Park.

The Rebels were farewelling AAMI Park for season 2014, and with it, Jason Woodward and Hugh Pyle, both playing their final home game for the club. The Reds were without both Quade Cooper and Will Genia for the first time since 2008, and, with their slim finals hopes – as well as those of the Force and Waratahs – in their hands in coming games, in desperate need of an end-of-year lift.

The Rebels were making a lot of noise in the media over the long lead up to this match, sizzling the prospect of a run to their best season ever starting with a second win over the Reds. The local crowd also had the prospect of seeing new recruits Dom Shipperley and Mike Harris in the flesh for the first time since their signings.

Shipperley’s introduction to his new home would last only five minutes, suffering a compound fracture to his ankle, the collateral damage of a busting Anthony Fainga’a tackle on Tom English.

The subsequent medical attention caused a significant break in the game, after which the Rebels were caught napping. The Reds took just two phases to break wide, Mike Harris setting up Rod Davies for the break, passing off to Shipperley’s replacement, Lachie Turner, to complete the try. Harris converted to give the Reds a 7-0 lead after 11 minutes.

The Rebels responded, and had their best chance to get into the game when, after Jason Woodward converted a penalty to cut the Reds’ lead to four, the Reds were cut to 14, Lachie Turner yellow carded for a dangerous tackle on Bryce Hegarty.

The advantage amounted to nothing for the home side, who suffered from the same poor handling and decision making that had haunted them to various degrees all year. When Turner returned, the Reds struck again, playing through nine phases before Ben Tapuai nailed a cross-field kick to Rod Davies, who popped to Mike Harris for the Reds’ second. Harris missed the conversion, leaving the score at 12-3 after 26.

James Horwill was immense for the Reds. In the breakdown, he was at his most devastating in some time, but it was as captain where he really made the Rebels pay. As the brittle Melbourne defence fell to pieces and the Reds were awarded penalty after penalty, Horwill insisted turning the screws by going for touch.

Mitch Inman was sent off with six minutes remaining in the first half, after a no-hands tackle on Beau Robinson, and that opened the floodgates for the Reds. Two consecutive forward set pieces had the same result, Nick Frisby sent over the line both times to send the Reds rocketing to a 22-3 half-time lead. The Rebels were frozen, and not because of the severe wind chill. They had been schooled by a slick Queensland outfit, out for revenge.

The second half showed no sign of deviating from the form line, Lachie Turner touching down for his second try of the night eight minutes after the restart. Mike Harris converted to extend the lead to 26.

It was an unlikely source who kickstarted a Rebel resurgence, reserve hooker Shota Horie, inexplicably in the back line, breaking through the Reds line with a scintillating run. He passed off to Tamati Ellison, who popped to Bryce Hegarty. Hegarty’s pass was knocked up by a rogue Nick Frisby arm, landing with Luke Burgess, who scored the Rebels’ first try. Jason Woodward missed the conversion, the score 29-8 after 52.

The home fans had barely stopped celebrating before their team were on the board again. Scott Higginbotham picked up a loose ball from a turnover, passed to Tom English, then Bryce Hegarty, who collected his own perfectly-weighted down-field kick to score the Rebels’ second. Woodward again missed the kick, leaving the score 29-13 on the hour.

The Reds returned to their formula of possession-based dominance, piling on the pressure in the last 20 minutes. They were rewarded with nine minutes to go, when Rod Davies waltzed through the remains of the Rebel line to score the Reds’ sixth try. Harris converted for a 36-13 lead.

Melbourne’s loyal fans would earn one more consolation prize for braving the bitter cold, Mitch Inman crashing over from close range for a third try to the Rebels.

Jason Woodward took his last kick as a Rebel, and hit truly, the 36-20 scoreline flattering the Rebels on a night that belonged to the rampaging Reds.

Nick Frisby’s seven-minute double changed the outlook of the game completely, and broke the backs of the Rebels when it looked like their poor first half performance would be forgiven.

James Horwill. Led by example with a fantastic first half, his captaincy won the game for the Reds when he continually took on the weakened Rebel defence instead of taking easy points.

James Horwill. This was just the game he needed to get back into contention. A timely reminder of just how good the former captain can be.