It wasn’t pretty, they got the better of the reffing and thankfully the Hurricanes slipped up in Auckland, but today’s professional win by the Waratahs has ensured some respectability for Australia’s 2008 Super 14 showing with a home semi booked in Sydney.

Yet again the back row proved the Tahs most effective attacking weapon, Waugh setting up Mums try with a great around the corner dart and offload, Elsom making runs all over the show and Palu sealing the victory with a well taken break off the back of a maul (below). In greasy conditions the backrow battle was always going to be key and despite the retiree Croft having a great game on the ground, the inexperience of Houston and Luafutu was telling.

At no stage did the Reds roll over. They showed real nouse through the midfield; Barnes still has composure belying his years (witness the classy dropgoal in the 45th minute) and Turinui has come into his own in the second half of the season. His nose for a gap and ability to pop pass from the floor has been consistently sensational.If they could transplant his brain into Rob Horne you would instantly have the perfect footballer. Morgs’ perfectly weighted chip kick for Hynes at the death (below) made the score line closer than the reality.

At the breakdown contest the Queenslanders also did well. I’ve mentioned Croft but Horwill had a good game here as well as stealing line-outs, and Rodzilla played a good cameo in the loose. Despite looking like an oversized schoolboy whose mum still feeds him, Houston can make yards. Unfortunately he also stuck his head in a maul the precise moment he should have been defending the fringes from Palu (see above). 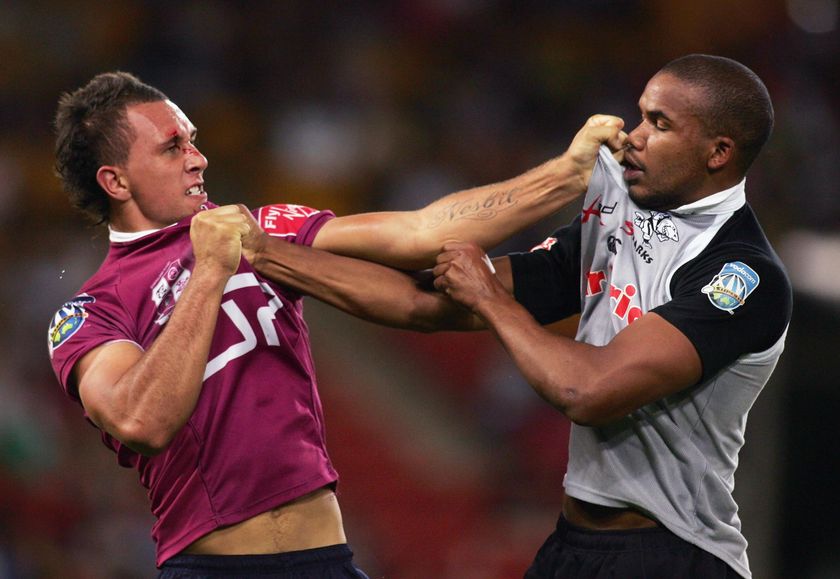 The most press-hyped battle of the night – Portly Beale vs Quooade Kawooper – fizzled out as could have been predicted. Apart from his incredibly fugly mullet, and a propensity to bound into the air before attempting a step, there was nothing remarkable about Cooper. Beale’s won this ‘contest’, simply through his marshalling of the Tah backline and distance punting – duties not entrusted to pogo boy. Obvious room for improvement lies in Portly’s place kicking – he’d missed 3 vital shots from in front when the lead was still only 6 points.

Neither of the two are convincing defensively. Cooper puts a hit on with the shoulder but doesn’t actually want to hit the deck so avoids holding on for what can be called a tackle. Beale seems to see himself as a defensive coat check boy – he holds the the attacking runner for a beat and taps them on the back as if to say “someone needs to tackle this guy” before getting out of the way.

For the Tahs most of the usual names did great work. Tuqiri, Burgess, Vickerman et al. Although I need to mention the scrum, it’s not my imagination, it is doing well and I even have to admit that ‘Big’ Al Baxtah monstered his opposite Coutts in the first half. Not a story for the Reds #1 to tell his grandkids.

Yet again though, by far the biggest hero in this Tah outfit is Les Kiss and the team’s defense. Tonight, as per many others, the Tahs simply shut down the game when they’d got far enough ahead. While Kissy might never be head coach material, they should consider paying him about the same as Link’s replacement. It’s why they’ve got the home semi this year. No doubt.