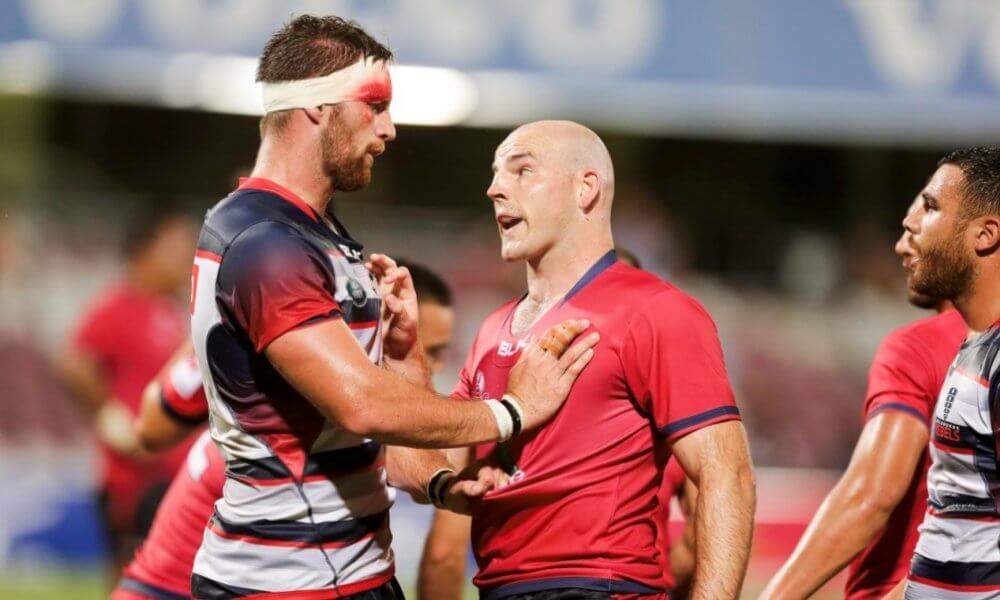 The Queensland Reds completed their preparation for the 2017 Super Rugby season with an impressive 32-13 win over the Melbourne Rebels at Ballymore on Valentine’s Day.  The four tries to one victory just two days after a draining Brisbane Tens campaign (for both teams) is the final match for both teams before their Super Rugby campaign commences next week.

With both teams naming almost full strength squads this match would be a key determinant for each coach’s final line up. The Rebels made their intentions known early by attempting an early penalty goal, which kiwi flyhalf Jackson Garden-Bachop missed. Points would soon come however when recent Wallaby Sefa Naivalu found space down the blind and busting his way through some soft Queensland defence to run in a try from close to 50 metres out.  Garden-Bachop kicked the conversion and signs were ominous early for the home team. 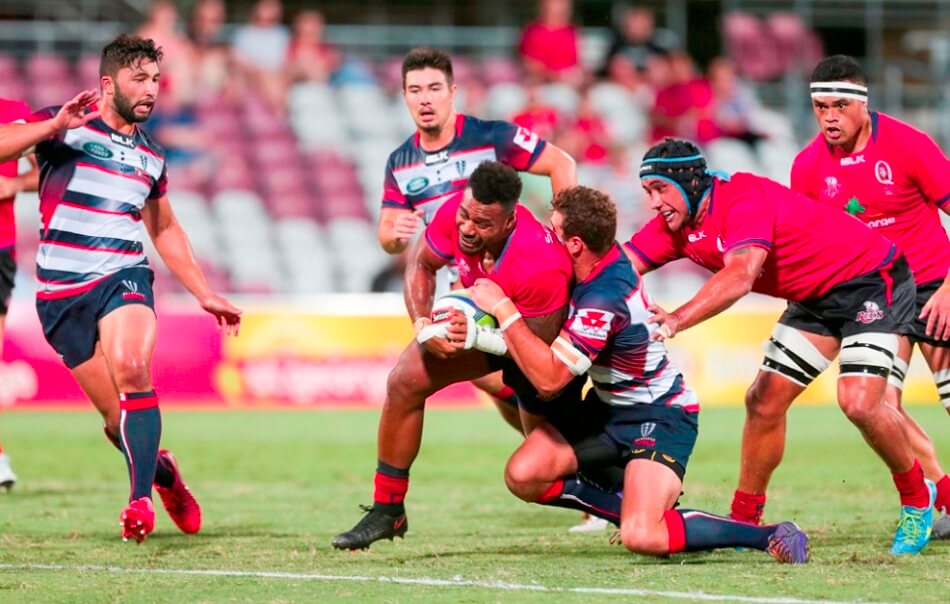 Both teams attempted to give the ball some width early with the Reds in particular struggling to find early combination. Passes went to ground on what seemed like every attempted backline move until the old favorite of ‘give it to Samu’ settled things down. After traded penalties brought the score to 10-3 in favour of Melbourne, Karmichaal Hunt began to involve himself more and the Reds backline began to click.

Some combination between the key playmakers Quade Cooper and Duncan Paia’aua opened some cracks in the Rebels defensive line before Hunt broke through and delivered an inside pass to lock Rob Simmons to barge his way over for a try next to the posts.

From there momentum began to swing Queensland’s way. The trio of Cooper, Paia’aua and Hunt finally had passes delivered to their desired support and the likes of Izaia Perese, Eto Nabuli and Kerevi. While the backline were finding their groove the pack, most notably the scrum, were enforcing their dominance. James Slipper was given Lawrie Weeks a torrid time while Sam Talaki out-muscled Cruze Ah-Nau who came on for the injured Toby Smith.

Despite their pack going backwards, Rebels halves Garden-Bachop and Nic Stirzaker displayed their composure and provided the few sparks in attack for their team.

The scrum was still under pressure and a raft of penalties right at half time, so the Reds opt for repeated scrums. A decision that was finally rewarded when Nabuli ran onto a deft Paia’aua pass to score adjacent to the posts. The first half of the trial, as was to be expected, was relatively scrappy with plenty of dropped ball. While possession was relatively even the Rebels were playing out of their half most of the time and were suffering from being on the wrong side of the penalty count. 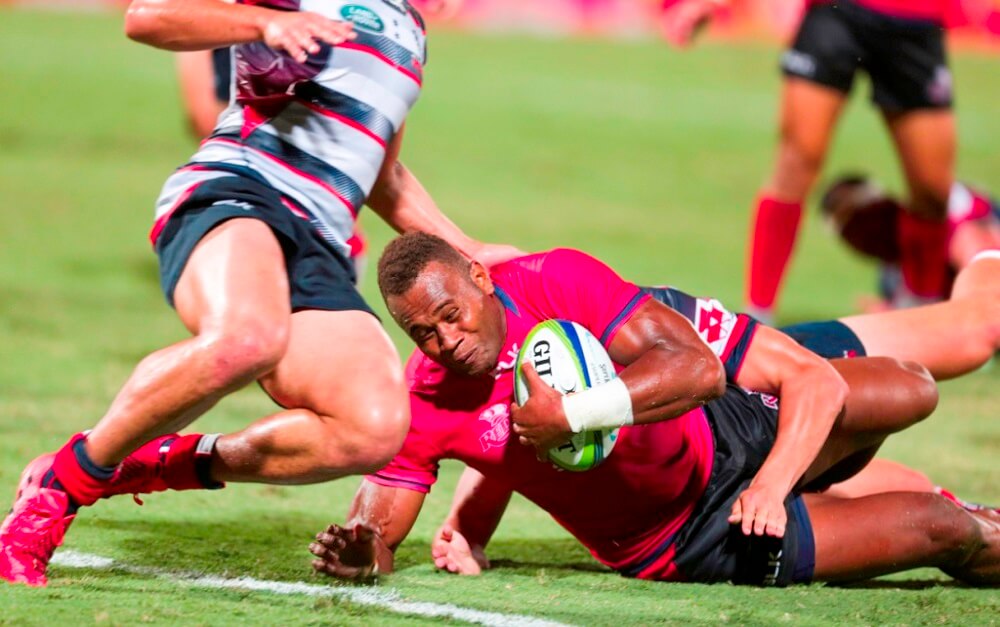 Following minimal changes in the first half, the Reds made some key changes at the break. Notably Wallaby front rowers Stephen Moore and Slipper were replaced with Andrew Ready and Sef Fa’agase, while Scott Higginbotham came on for Leroy Houston and Lachlan Maranta replaced Perese. The Rebels started the half pretty much as they finished in terms of personnel, and the team started the 2nd stanza with a lot more authority. They opted to take the ball up the middle with greater intensity however the Reds’ tackling was up to the task.

The Rebels were able to sustain pressure close to the Reds line and were twice denied by excellent Reds work. On one occasion it looked as though a perfectly formed Melbourne maul would muscle it’s way across the line only for the Reds to defend the maul perfectly until Ready was able to disrupt it at the back and earn the scrum. Soon after Scott Higginbotham secured a turnover just inches from the tryline with the Rebels destined to score. It was a big play at a big time and signalled Higgers’ happy return to Ballymore.

If Melbourne thought that the scrum battle would be easier with the Reds down their Wallabies, they were wrong. If anything it intensified. Whereas in the first half they were at least able to maintain their shape, in the 2nd half the Reds demolished scrum and Melbourne scrum with Talakai again in the centre of the action.

The Reds’ defence was almost as impressive as their scrum, and sometimes was just as powerful. Rebels scrumhalves Stirzaker and his replacement Meehan were forced to revert to box kicks to find space and get their team moving forward. From one such kick, however, the Reds were able to launch a counter attack with those three Cooper, Paia’aua and Hunt combining again, this time to send replacement winger Chris Kuridrani streaking away to score. 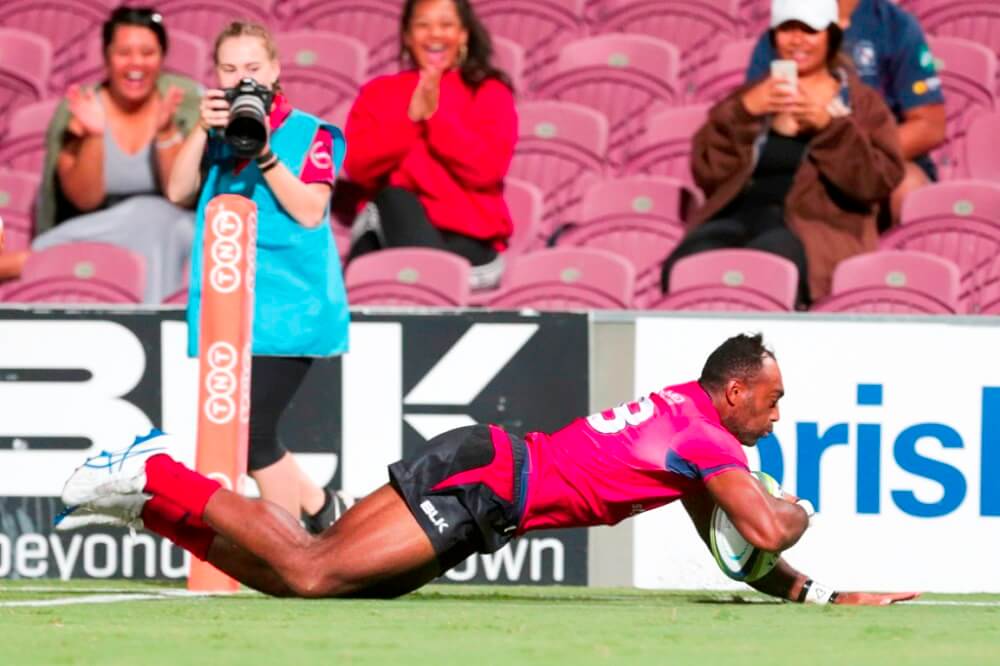 The try, with twenty minutes to go, signalled the floodgates to be opened for replacements on both sides. Not long after the Kuridrani try, and following an exciting solo run through the midfield, Kuridrani again found space down the wing and this time set up Higginbotham for the final try of the night in his return to Queensland.

Soon enough that familiar Ballymore siren sounded and referee Nic Berry called a halt to proceedings, really putting the Rebels out of their misery.

Their’s no premierships in February so it’s important not to read too much into their match. However it’s worth noting a few broad observations. For the Reds, coach Nick Stiles must be happy with the set piece. The scrum was a weapon, including with replacements on, and the lineout was rock solid. The defence, as described, was extremely aggressive and effective as the Rebels failed to make much ground other than that very early try to Naivalu. The combination of Cooper, Paia’aua and Hunt looks very exciting, noting that there were far too many dropped balls and astray passes particularly early in the game. A special mention to Adam Korczyk who played openside flanker and was tireless in his efforts, while also proving a valuable lineout option at the front.

For the Rebels the scrum and their discipline are their most obvious issues. Both can be linked directly to the dominance of their opposition but they will be a key focus of their coaches this week. The halves, in Stirzaker and Garden-Bachop, looks a likely combination however JGB did miss some simple kicks from basically in front. The backrow combination of Amanaki Mafi, Lopeti Timani and Colby Fainga’a worked hard and should be an effective combination until Sean McMahon returns. Rookie fullback Jack Maddocks looked completely at ease at the back and showed his class on a number of occasions, while Tom English was one of the most effective Rebels on both sides of the ball.

The Rebels kick off the Super Rugby season on Thursday 23 February when they host the Blues, while the Reds will play their first game the following night at Suncorp Stadium against the Sharks.

*Jersey numbers may have changed for the match