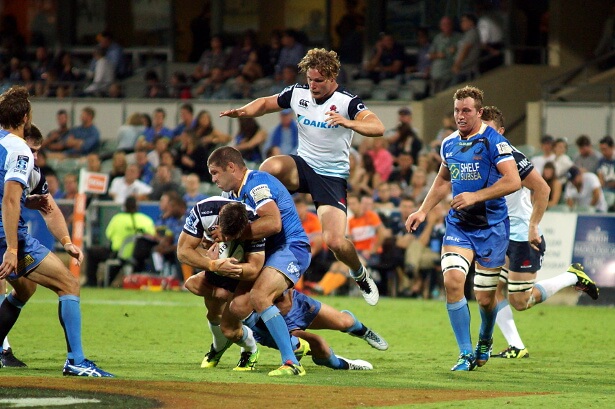 It’s that time of the year again when everybody is excited about the first Super Rugby game of the season for their team, yet they have no clue about how they will perform. Not really.

The Waratahs had their biggest win ever against the Force, in Perth last year, but before that they had lost three in a row to the westerners including both games in 2015. Does that mean a lot? Not really either.

There isn’t any unless you count trial form and you probably shouldn’t.

The Waratahs showed they had good depth when their secondary players had a good trial win against the Brumbies’ Firsts, but all the NSW players looked ragged in the Rugby Tens. The non-core squaddies, also played well in the second half of the last trial, against the Highlanders. This made up for the poor form of the main players in the first half and enabled the Tahs to claw their way back to tie the game, before the Clan slotted a winning penalty goal at the death.

The Force had a convincing win against the Rebels at Bond University, scoring four tries to one when both teams were in Queensland recently. Later at the Brisbane Tens they were the only Aussie team to make the quarter-finals and looked promising scoring two tries by half-time, but the Bulls scored three after the break to win.

Tatafu Polota-Nau – playing for the Force this year

The Waratahs will field a similar run-on side as for their final trial against the Highlanders last week, except that utility back Rob Horne and scrum half Nick Phipps will start the game, and flyhalf Bernard Foley had to withdraw late after being dazed last week.

The selection of Horne is extraordinary since he has not played, nor had much contact work, since injuring his shoulder in the Sydney Bledisloe in August. Fullback Andrew Kellaway (shoulder) and Jack Dempsey (achilles) were passed fit, but reserve Ned Hanigan (hamstring) was excluded.

Athletic Michael Wells, who started a couple of games for the Brumbies last year, will make his Waratahs’ debut, in his hometown, at no. 8. He will be subbing until Jed Holloway is fit to play, which may be on the South African tour.

Ex-Rabbitohs’ leaguie Irae Simone returned to rugby union in 2016 and made his mark in the Shute Shield and the NRC.  He will get a dream start at inside centre in preference to fully-contracted players.

The Force have named three Super Rugby debutants in their starting team: 11. Chance Peni, 12. Bill Meakes and 13. Curtis Rona, and three in the reserves: Isireli Naisarani, Michael Ruru and Alex Newsome. Tatafu- Polota-Nau and Ben Daley will play their first games for the Force from the bench.

The WA team are without 7 Matt Hodgson (hamstring) and 8 Ben McCalman (thumb), having already lost lock Ben Matwijow for the season. But at least flyhalf Jono Lance is fighting fit for his first serious game since he broke his arm playing for Australia A against the French Barbarians in November.

Waratahs’ Head Coach Darryl Gibson is on record as saying that he erred in putting pressure on his forwards to be ball players for a period last year and “execute skills they didn’t necessarily have”. That is probably code that the tight-five will be taking the ball up the guts which has been their strength anyway.

They will also try to attack the Force scrum early as they were one of the best scrummaging teams after a horrible start in 2016.

The Force will have noticed that the Tahs were vulnerable to well-placed tactical kicks in their last trial as they left too many enticing areas to land the ball in; nor were the opponent wingers well-marked for wide kicks. The Force will also spin the ball wide, especially to the right because NSW were short of defenders there repeatedly last time out.

That will fit in well with the plans of new Force Head Coach David Wessels who has signalled an interest in getting the ball wide more, as one way of scoring more tries this year – and score more, they have to.

Curtis Rona recruit from the Bulldogs – worth a watch folks

You’re kidding – the first round of the season and the Waratahs have been the bunnies of the Force in recent times. Then there’s Tatafu returning to Allianz Stadium where no doubt the Tahs crowd will give him a cheer when he runs on.

The hookers – I was looking forward to the contest between Polota-Nau and his recent apprentice Latu, but Tatafu will play from the bench. It will be interesting to see if Polota-Nau makes any difference at scrum time later on.

The centres – In one corner there is young gun sensation in the NRC, Irae Simone, at 12, and Israel Folau in his preferred position of 13. In the other corner is uncompromising Manly lad and ex-Aussie U20s player 12 Bill Meakes, late from Gloucester, and exciting ex-Bulldog player 13. Curtis Rona, swiped from rugby league. Worth a look this.

The lineouts – Both teams were ordinary in this element of the game last year. Will either show the improvement needed to help make their ladder positions better in 2017?

Neither team great doing this in 2016

The Waratahs players have the bigger scrapbooks yet the Force have the best pre-season form.

The Force had the best goal-kicking percentage in Super Rugby last year but, Catch-22 – there were a lot of penalty goals because there weren’t a lot of tries to convert.

I can’t see the Force winning this one, even though Bernard Foley is not playing against them, but neither did I see them beating the Waratahs twice in 2015.

Since they can’t demonstrate yet that they can score more tries this season: