The Sharks, fresh off a bye, are playing host to the Melbourne Rebels, who last week saluted the judge for the first time this season.

This match in the wee hours of Sunday morning will be watched live by the diehards, and I suggest Foxtel iQ may be getting a workout.

So, how’s the recent playing form of both teams?

The bye came at a good time for the Sharks who survived a physical battle at King’s Park against the Jaguares with an 18-13 victory in round 7. The Sharks are currently sitting second in Africa 2 conference with five wins and two losses. The Sharks fans have been exposed to a number of close matches (win or lose) during the season with 6 of the Sharks matches having a margin of 8 or less. The only exception to this close margin was the round 3 home win over the Waratahs 37 to 14. Funnily enough, the Sharks have won all four matches versus the Rebels with three of those margins being less than 7 points. The outlier is massive though with a 57 point victory in 2013.

The Rebels produced a gritty 19-17 win against the Brumbies last weekend. Apart from this win, 65 minutes v the Chiefs and a half v the Waratahs the rest of the season has been close to a disaster.  A 38 point loss to the Blues, a 65 point loss to the Hurricanes and a 39 point loss to the Highlanders, a large injury list and the fact that the Rebels (along with the Force) are one of two Australian teams still on the chopping block.

The Sharks have made one change to the pack with dynamic young flanker Jean-Luc du Preez missing the match due to an ankle injury. Du Preez is leading the competition for tackles made (84) and is equal fourth for defenders beaten (25). He is replaced in the starting line up by Philip van der Walt with Jacques Vermeulen providing loose forward cover on the bench. Curwin Bosch returns to flyhalf while Rhyno Smith moves from the bench to fullback. Bernhard Janse van Rensburg has moved onto the bench replacing Innocent Radebe who drops out of the matchday 23.

There have been a number of changes from last week’s winning line up all in the forwards. Dom Day was injured, Colby Fainga’a has remained home for the birth of his child, and Lopeti Timani has been suspended for four weeks for kneeing Rory Arnold. Timani was lucky to only receive a yellow card at the time for what can only be described as an undisciplined act, particularly from a player with over 50 Super Rugby caps and 6 Wallabies caps to his name and considering Colby Fainga’a had just received a yellow card.

The unavailability of these players does provide opportunities for other players. Northern Suburbs’ Will Miller has been named in the starting XV to make his Super Rugby debut. There are also two potential debutants on the bench with Miller’s Northern Suburbs teammate Hugh Sinclair and Rebels Under 20s lock Esei Haangana.

The Rebels also have a rather inexperienced starting front row of Fereti Sa’aga, Siliva Siliva and Tyrel Lomax. The experienced James Hanson and Laurie Weeks have both been named on the bench.

Who should you keep an eye on this week?

The Sharks winger has proved difficult to stop so far this season scoring five tries to be equal 7th in the competition. van Wyk has also made 14 clean breaks, which is equal second in the competition. So the Rebels defence will not want to provide van Wyk with any space.

Watch for Botha come lineout time; he has won 37 lineouts this season which is the most in the competition. By contrast, the Rebels player with the most lineout wins is Steve Cummins with just 21.

Mafi has been one of the shining lights for the Rebels this season. He has been a consistent presence throughout the season, and you could argue that he is leading the Rebels player of the year. Mafi has always been willing to put his hand up in both attack and defence with some of his damaging runs with the ball a particular highlight. 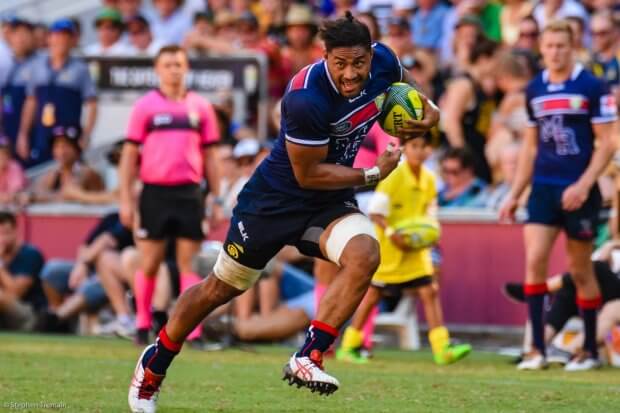 Amanaki Mafi – this man is like a Gazelle in full flight

One of the Rebels attacking weapons, in 18 matches since he made his debut for the Rebels he has scored 12 tries (only two players Higginbotham 15 and Vuna 13 have scored more tries for the Rebels). He also is the Rebels leading try scorer this season with 3 and has scored 53 out of the Rebels 94 points. He is one of only 6 Rebels players to score this season. Hodge’s long distance goalkicking will also be a feature, and the Sharks will have to be careful of their discipline near the halfway line.

The Sharks forward pack should be the more dominant at the set piece. The Sharks have an 88% lineout success and 98% scrum success compared to the Rebels 79% in both categories. With the more inexperienced pack for the Rebels, this should be even more so in this match. Although the Rebels scrum did win a crucial penalty late in the game last week v the Brumbies.

The Republic is akin to the Melbourne Rebels’ equivalent of the Bermuda Triangle. Rebels fans are hoping for the Rebels to break their duck in South Africa I would look at next week’s clash versus the Kings, who will be returning home after a three week trip to Australia, as the more likely opportunity. With the Sharks fresh off a bye, needing a win to keep in touch with the Lions at the top of the Africa 2 Conference and with the Rebels forward pack even more depleted this week than it has been all season, I would expect …

Waratahs serve up a big pile of rubbish to their few remaining fans
Review: Force vs. Chiefs